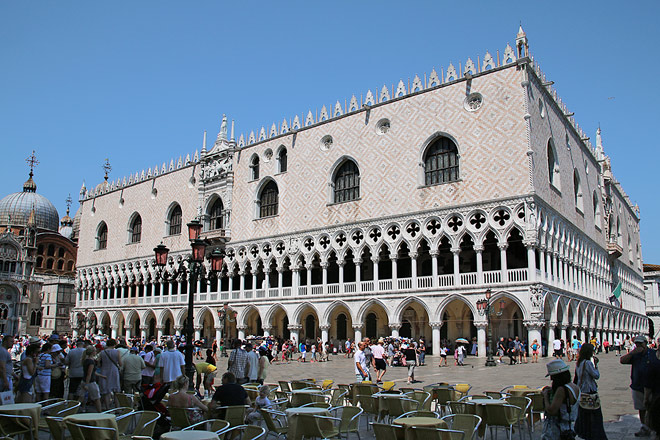 A masterpiece of Gothic architecture, the Doge’s Palace, the residence of the supreme authority of the Republic of Venice, is an impressive structure composed of layers of building elements and ornamentation, from its 14th and 15th century original foundations to the significant Renaissance and opulent Mannerist adjunctions. The structure is made up of three large blocks, incorporating previous constructions. The wing towards the St. Mark’s Basin is the oldest, rebuilt from 1340 onwards. The wing towards St. Mark’s Square was built in its present form from 1424 onwards. The canal-side wing, housing the Doge’s apartments and many government offices, dates from the Renaissance and was built between 1483 and 1565.

The Museo dell’Opera
Over the centuries, the Doge’s Palace has been restructured and restored countless times.
After a major restoration in 1876, 42 capitals belonging to the ground-floor arcade and the upper loggia were removed and replaced by copies. The originals, some of which were masterpieces of Venetian sculpture of the 14th and 15th centuries, are displayed, together with other sculptures from the facades, in the Museum of the Works of the Doge’s Palace.

The Courtyard and the Loggias
The north side of the courtyard is closed by the junction between the Palace and St. Mark’s Basilica, which used to be the Doge’s chapel. At the center of the courtyard stand two well-heads dating from the mid-16th century. Used for formal entrances, the Giants’ Staircase is guarded by Sansovino’s two colossal statues of Mars and Neptune, which represents Venice’s power by land and by sea. The visit itinerary leads through the Renaissance wing, from the Censors’ Staircase to the Gold Staircase, up to the floors, where various State Government offices were situated.

The Doge’s Apartments
The entire area was destroyed in a fire in 1483 and then rebuilt in the Renaissance style. The rooms' decoration is remarkable with its engraved wooden ceilings, monumental marble chimneys with lavish, delicate carved decoration, painting friezes and stuccoes.

Institutional Chambers
These were the rooms which housed the organs of the political and judicial administration.
In all of the rooms on the first floor, second floor, and the Loggia floor, the decor is carefully chosen and designed not only to indicate the role of the bodies who met within them, but also to celebrate the virtues of the State.

Prisons
As the seat of all government and judiciary functions within the Republic, the Doge’s Palace also housed prisons. In the mid-16th century it was decided to build a new structure on the other side of the canal to house the prisons and the chambers of the magistrates. The New Prisons were linked to the palace by the Bridge of Sighs (built in 1614). Enclosed and covered on all sides, the bridge contains two separate corridors that run next to each other.

Armoury
Contains a valuable historical collection of weapons and armaments from several sources.

Secret Itinerary
Rooms and chambers where the delicate work of some of the most important bodies in the Venetian administration was carried out. The visit of the rooms of this "Secret Itinerary" can only take place accompanied by an accredited guide.