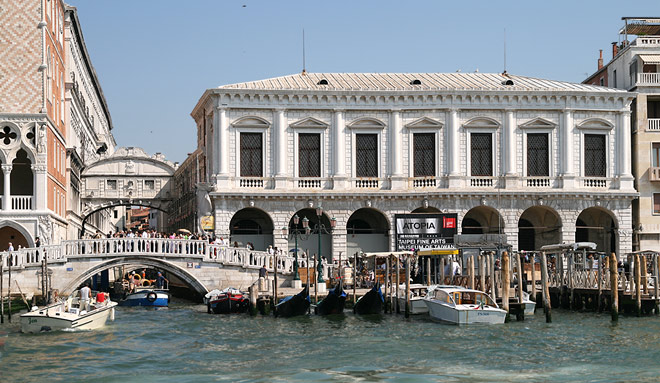 The Prisons' Palace, on Venice's famous waterside promenade Riva degli Schiavoni, was built to complement the prisons of the Palazzo Ducale on the other side of the small canal. It was initiated by architect Antonio da Ponte in 1589, and completed by his nephew Antonio Contino in 1614. The palazzo was also the seat of the Magistratura dei Signori di Notte al Criminal, in charge of prosecuting common criminals, and the prisoners' surveillance.

The New Prisons were linked to the palace by the Bridge of Sighs (built 1614). Enclosed and covered on all sides, the bridge contains two separate corridors that run next to each other. The famous name of the bridge dates from the Romantic period and was supposed to refer to the sighs of prisoners who, passing from the courtroom to the cell in which they would serve their sentence, took a last look at freedom as they glimpsed the lagoon and San Giorgio through the small windows.

The access to visit the prisons and the Bridge of Sighs is from the Doge’s Palace.

On the first floor of the Palazzo delle Prigioni, there are several rooms destined for exhibitions, concerts and events. They are under the administration of the Circolo Artistico di Venezia, an association constituted in 1919, and can be visited entering the building from the promenade Riva degli Schiavoni.

The Palazzo delle Prigioni is the venue of the exhibitions organized by the Taipei Fine Arts Museum of Taiwan during the International Art Exhibitions of the Venice Biennale since 1995.

(© Summary by Universes in Universe from different sources)