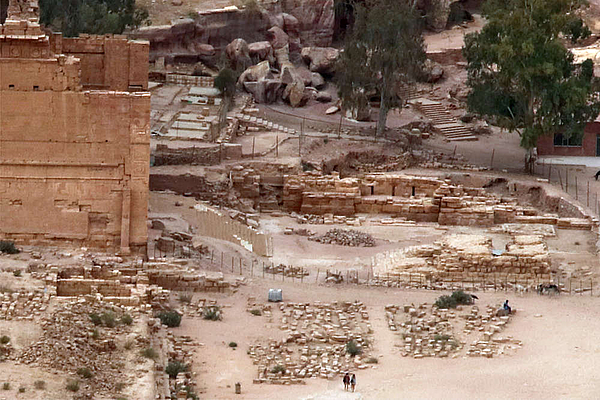 next
prev
more
Head of the large marble statue of Roman emperor Marcus Aurelius, from the monument of the imperial cult at the west side of the Temenos. Now at the Jordan Museum, Amman.
© Foto: Haupt & Binder, Universes in Universe
more
In the foreground you can see the ruins of the building complex east of the temple.
© Foto: Haupt & Binder, Universes in Universe

View of the forecourt of Qasr al-Bint

The west side of the Temenos (at the back of the photo) is dominated by an elongated structure, once with a row of columns in front of the walls. In its wide and high apse stood large marble statues that surely represented the Roman emperors Marcus Aurelius (see the sliding image) and Lucius Verus, who ruled together from 161 to 169 AD. The monument of the imperial cult, inaugurated between 165 and 169 AD, was dedicated to both of them, as evidenced by inscriptions and fragments of sculptures. To the right from the apsidal building, a small altar was also erected in Roman times.

On the photo one can see well how large the sacrificial altar on the forecourt of the temple is (right in the picture).

East of the Qasr al-Bint (in the front left of the photo) you can see the ruins of a building complex that belongs to the sanctuary and was built at the same time or a little earlier. Artifacts found there have been dated to before 20 AD. It is believed that ritual banquets were held in the building, which is occasionally called the priest's house.