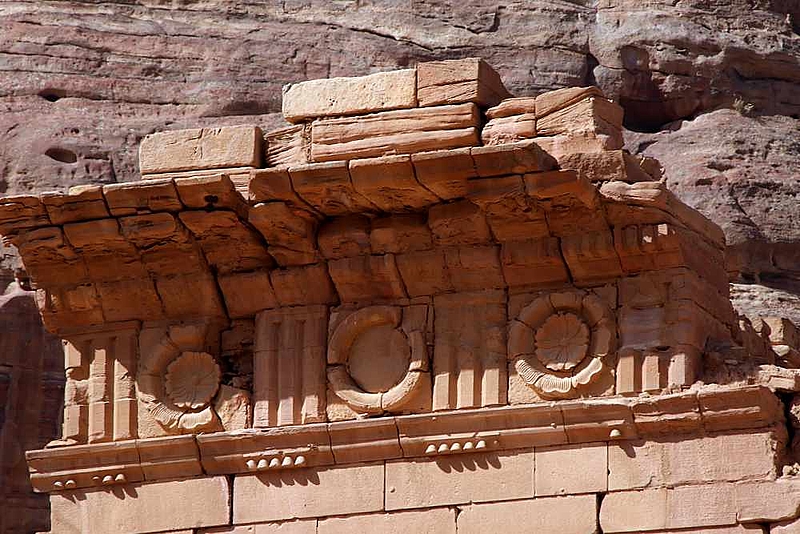 next
prev
more
The two preserved sections of the entablature of Qasr al-Bint.
© Foto: Haupt & Binder, Universes in Universe

On the east side of the temple, two segments of the elaborate entablature with Doric frieze remained remarkably intact despite several devastating earthquakes.

The architrave consists of two fasciae (horizontal mouldings, projecting from bottom to top) with guttae (Latin for drops, drop-like hanging elements) on the lower ledge.

In the Doric frieze of yellow sandstone, triglyphs alternate with floral rosettes and framed metopes, now empty. In these were figural limestone reliefs such as that of Helios, the sun god, with a crown of rays, found at Qasr al-Bint. "The Helios metope proves that besides the aniconic worship of the gods also anthropomorphic representations appeared, whereby the Nabataeans made use of Hellenistic models. ... Image typologies of such gods, which could be assimilated to aspects of Nabataean deities, were adopted. Thus, if one wanted to depict the Semitic lord of the heavens, either Helios and Zeus Olympios were suitable. …" (Schauerte & Wenning, pp. 144-145)

Above the cornice rises an undecorated wall - probably an attic that surrounded a terrace roof.