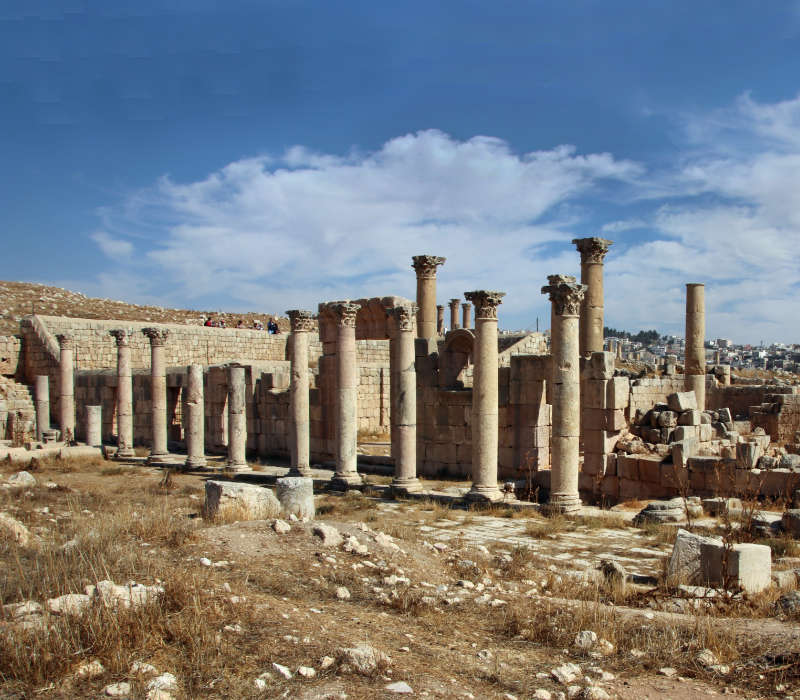 From the main entrance of the Church of St. Theodore, a path leads westward to a complex of three churches built side by side. You can also get there by going down the hill a little to the southwest of the Artemis Sanctuary. 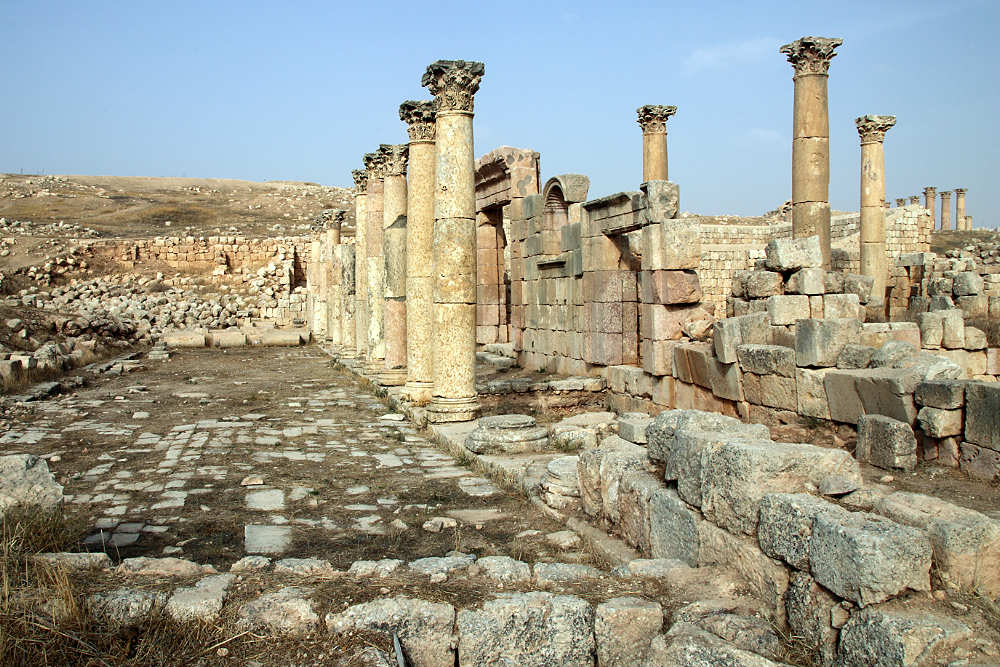 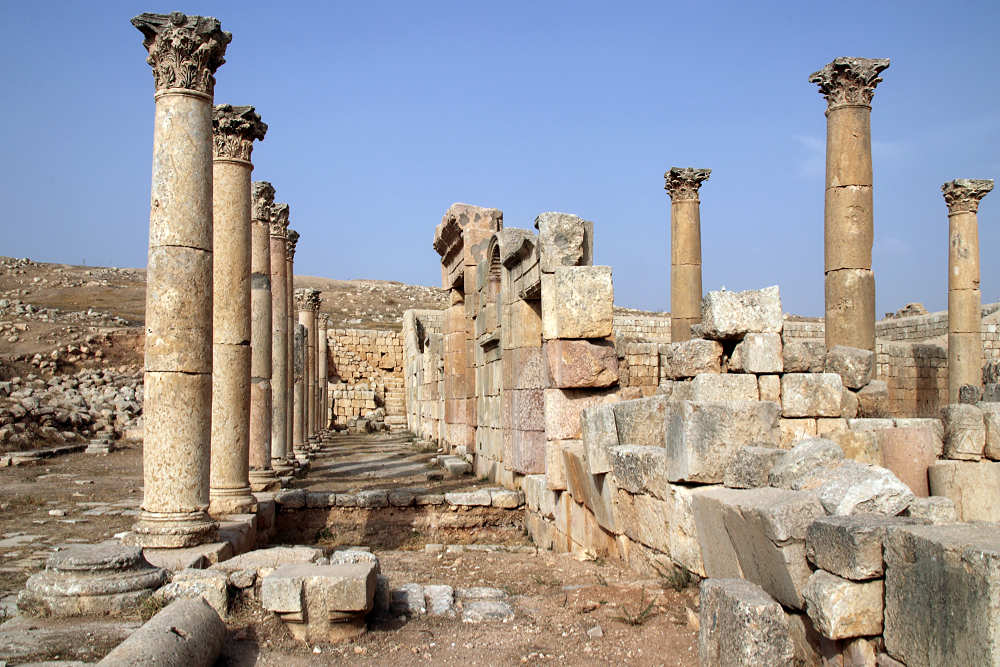 The churches are connected on the west side by a common atrium and a continuous narthex (narrow porch) in front of all three entrances.

Church of Saints Cosmas and Damianus 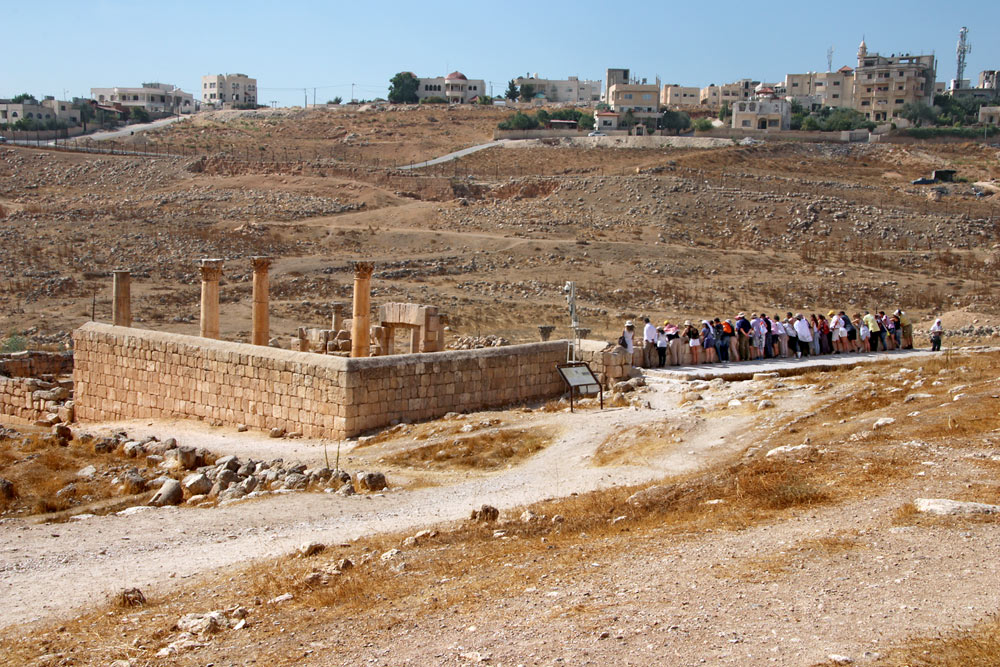 View from the northeast. The very well preserved floor mosaics can be seen from a wall parapet on the north side of the church.

The saints to whom the church is dedicated and the year 533 of its completion and consecration are mentioned in an inscription. The twin brothers Cosmas and Damianus studied in Syria and were well-known healers who treated many sick people free of charge and converted them to Christianity. During the persecution of Christians under the Roman Emperor Diocletian (ruled 284 to 305 AD), they suffered martyrdom by beheading. They belong to the "holy money despisers" and from the 5th century they are venerated, among other things, as patrons of medical professions and protectors against diseases. The church of Saints Cosmas and Damianus is a three-nave basilica with three entrance doors on the west side. The central nave, 16.5 m long and 7 m wide, was separated from the side naves by arcades on rectangular pillars. The walls of the church interior were covered with painted plaster.

For the northern part of the building (on the left in the photo), the rocky subsoil had to be deeply excavated. There, a narrow open courtyard was created with an entrance through an arch on the west side. It was connected with the northern side aisle by an open colonnade with three small columns.

In the semicircular apse, the Anglo-American excavation team found in 1929 remains of a glass mosaic that decorated the ceiling, as well as holes in the walls for the attachment of stone slabs. North (left) of the apse there is an almost square room, and south (right) of it was an entrance (now blocked by the wall) to a baptistery added in the 6th century between this and the adjacent church of St. John the Baptist. 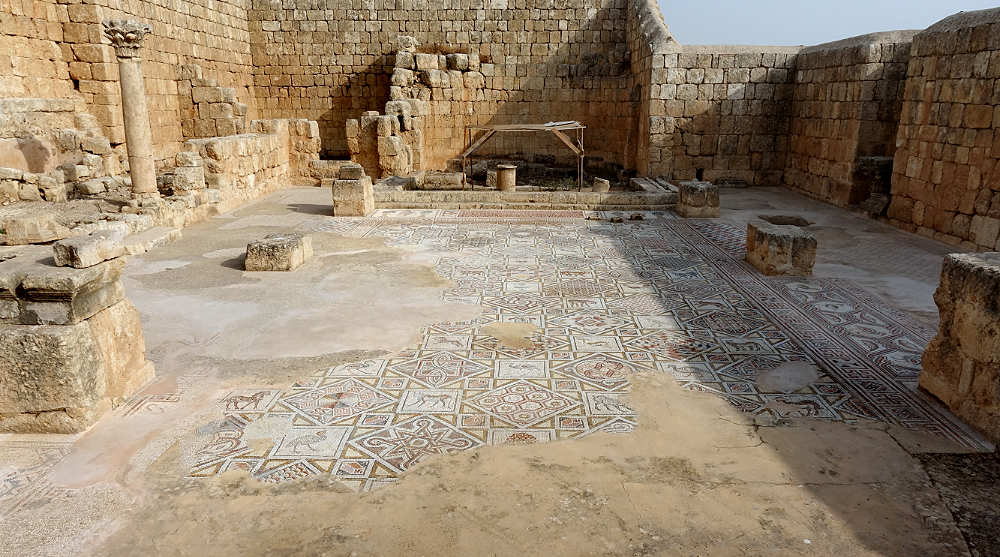 While most of the figurative mosaics in the other two churches of this complex were damaged by iconoclasm in the first quarter of the 8th century, those in the church of Saints Cosmas and Damianus were remarkably well preserved. Apparently, the church had already been abandoned in the 7th century and was not repaired after damage caused by earthquakes, which is why the mosaics remained protected by a thick layer of rubble. 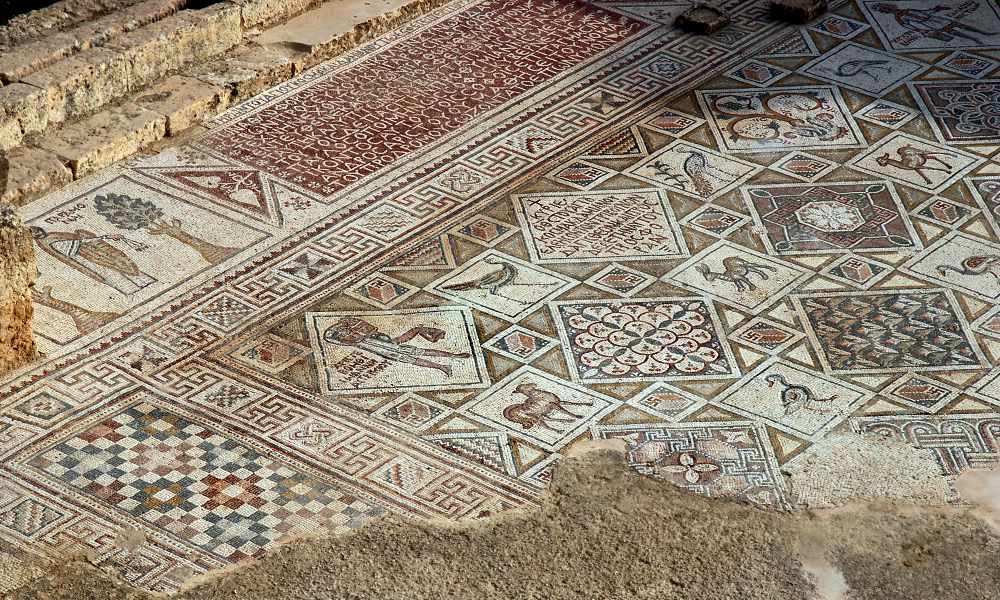 Six inscriptions were found on the mosaic floor. In a separate line immediately in front of the steps to the chancel is the year of the consecration and the dedication of the church to Saints Cosmas and Damian. Just below, a ten-line inscription in a tabula ansata mentions, among others, Bishop Paul and the donor Theodoros, who is also called Paramonarius (churchwarden). 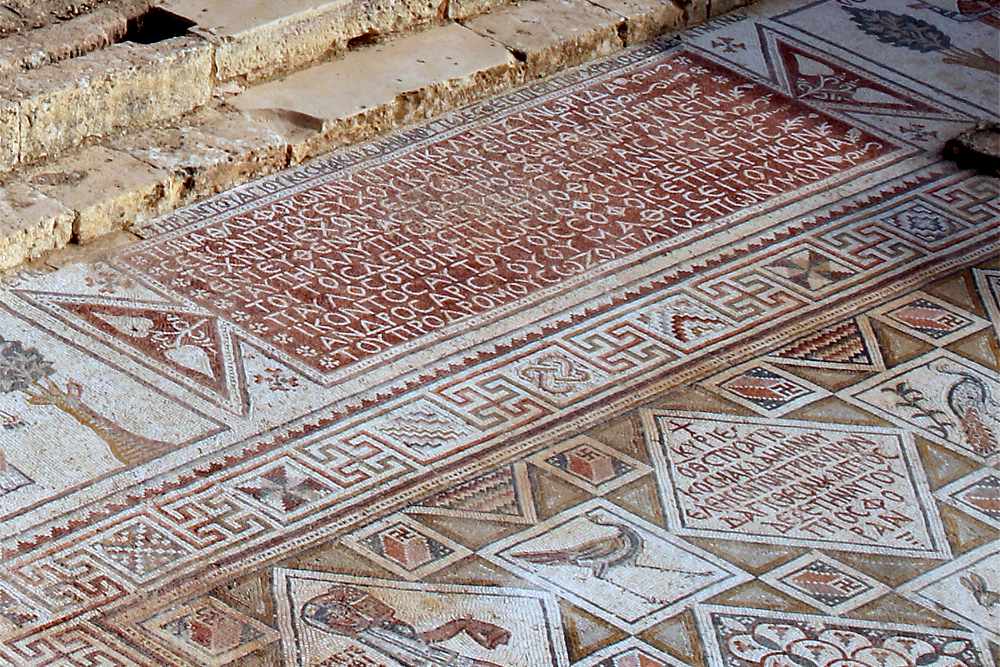 The inscriptions in front of the steps to the chancel. In the rhombus between the birds, Dagistheus, one of the generals of Emperor Justinian, is honored as the donor of the apse.
© Foto: Haupt and Binder, Universes in Universe 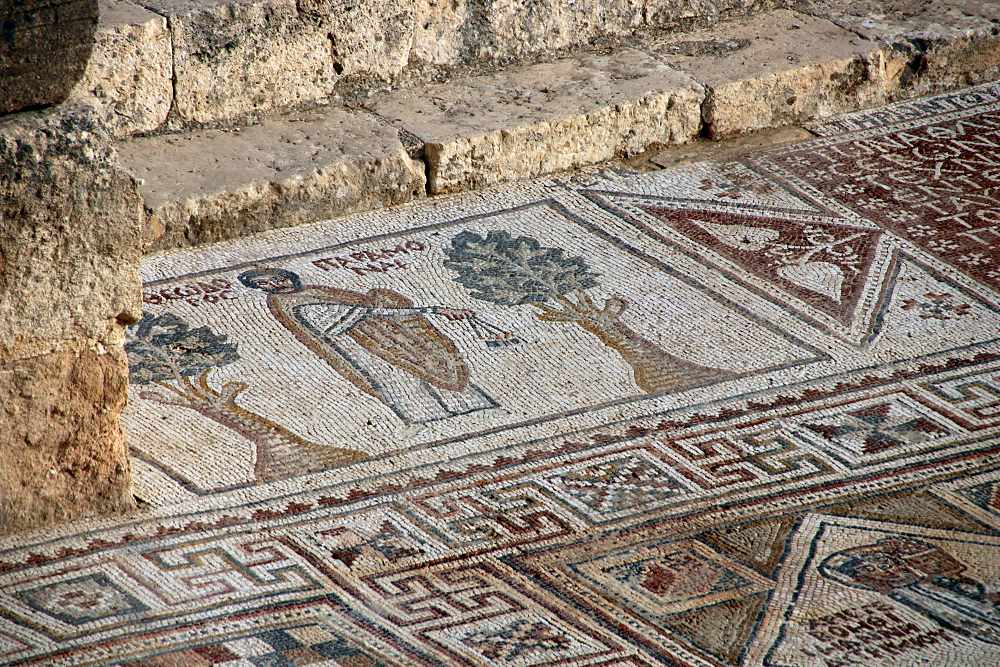 To the left of the inscription, the benefactor Theodoros is depicted with a thurible and the name Paramonarius (churchwarden).
© Foto: Haupt and Binder, Universes in Universe 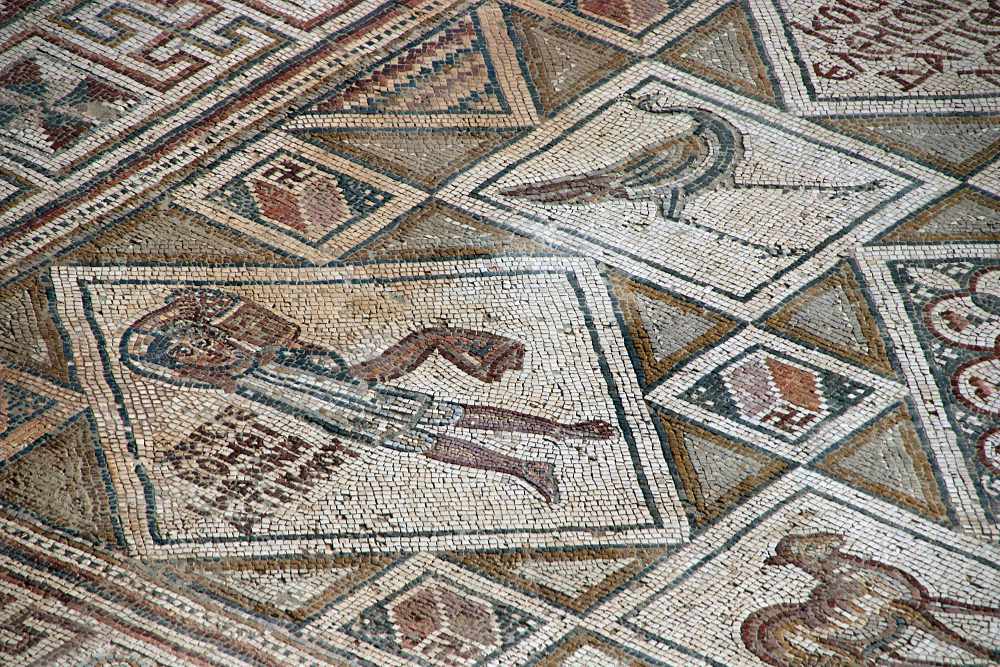 Under Theodoros, in the main field of the mosaic floor, appears a donor named John, son of Astricius.
© Foto: Haupt and Binder, Universes in Universe 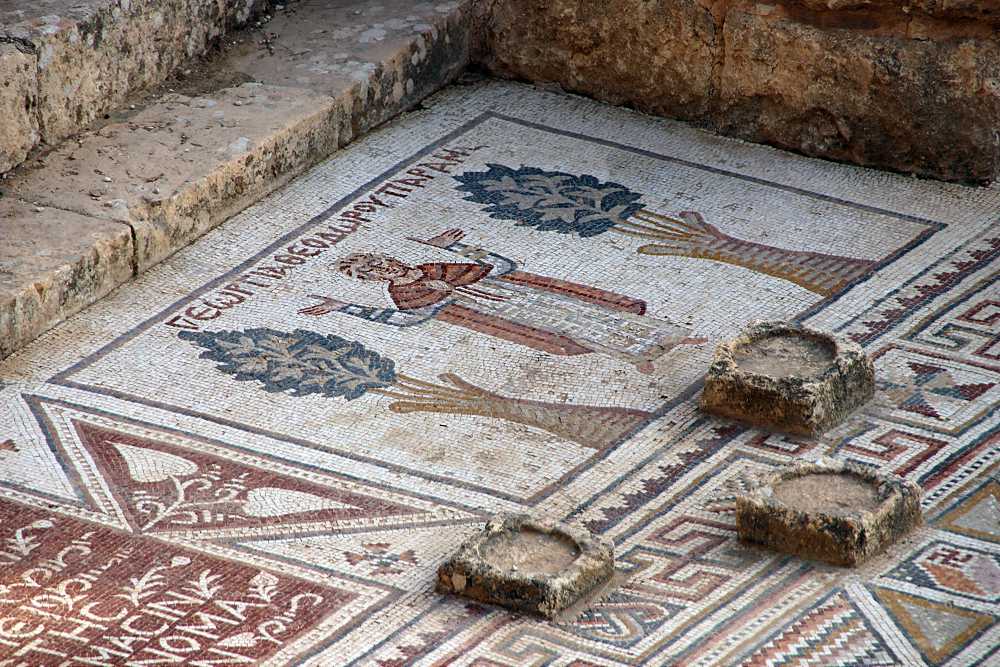 To the right of the inscription in the tabula ansata, Georgia, the wife of the benefactor Theodoros, is depicted with her hands raised in prayer. In front of it you can see the base of the three columns that supported the pulpit.
© Foto: Haupt and Binder, Universes in Universe 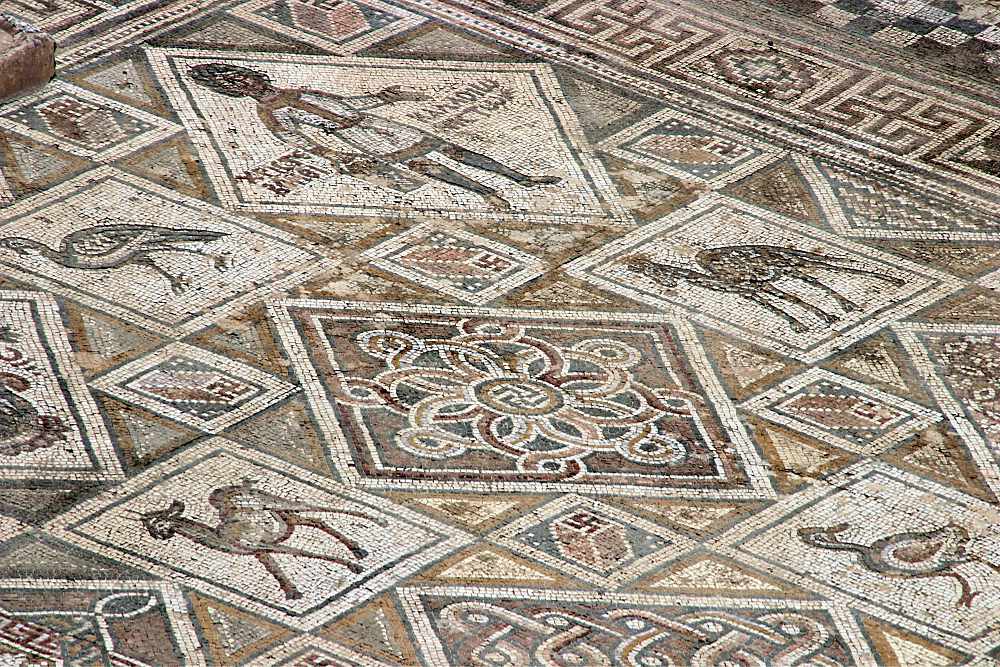 The male figure below Georgia and the column bases of the pulpit pays tribute to another benefactor named Calloenistus.
© Foto: Haupt and Binder, Universes in Universe 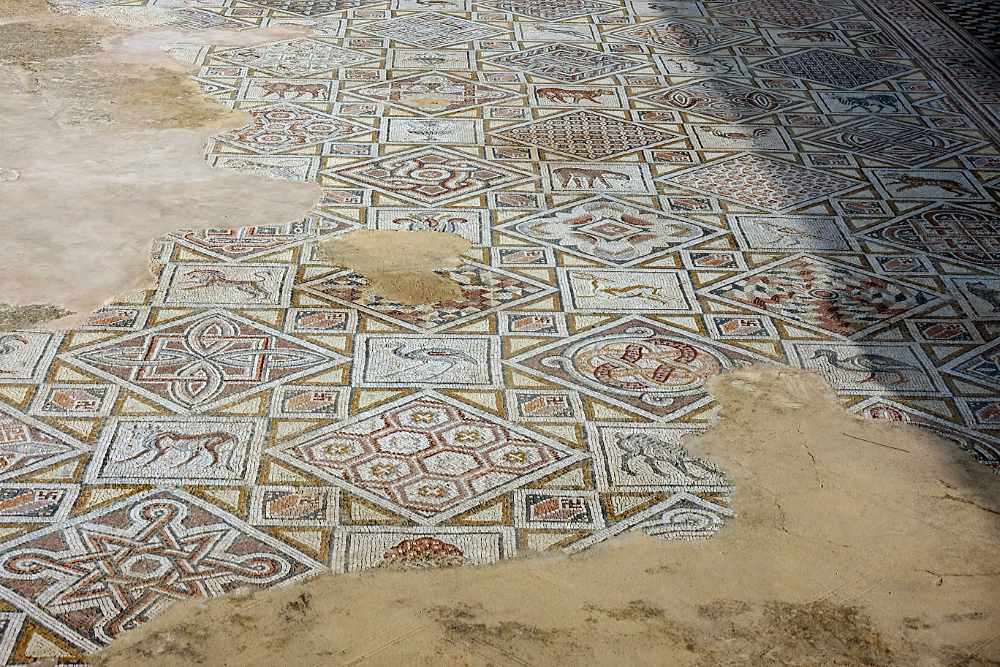 Part of the floor mosaic with animals between diamonds, in which are complex geometric patterns. View of the front area of the nave.
© Foto: Haupt and Binder, Universes in Universe
ZoomNextPrev

Church of Saint John the Baptist

The entrance behind the narthex (narrow porch) on the west side.

According to an inscription in front of the steps to the altar room, the middle of the three churches was built during the episcopate of Bishop Paul from donations from Theodoros, a foster son of Thomas, and was roofed over and decorated with mosaics in 531 AD. It is probably the same donor as in the church of Saints Cosmas and Damian, completed a little later (see above).

The ground plan of St. John's Church in Gerasa, measuring about 30 x 24 m, looks like a smaller version of the cathedral of Bosra in the Hauran, built about 20 years earlier (southwest of Syria, 512 - 513 AD, measuring 50 x 38 m). It is a circular building contained in a square with four horseshoe-shaped exedrae and an apse of the same form, from which doors lead off to side rooms connected to and used together with the two neighboring churches (see below). 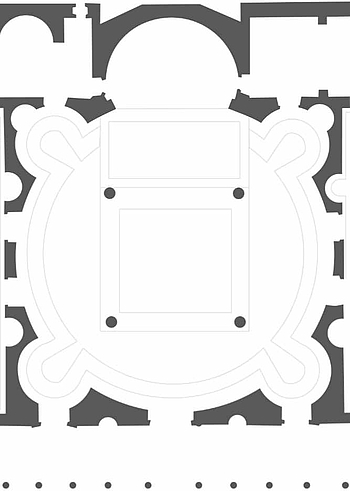 Also this church was built mostly from spolia of buildings from Roman times. This is well recognizable by the four columns with Corinthian capitals in the center from the 2nd century. In the floor of the church, the excavators found a piece of a building inscription from the sanctuary of Zeus, which served as a quarry in Byzantine times. 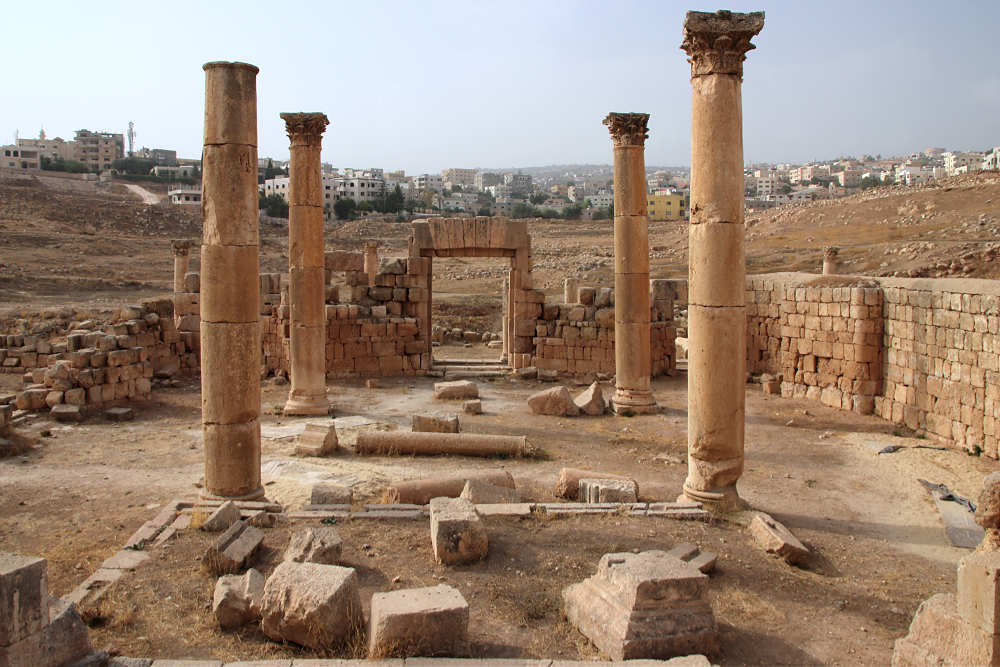 Saint John the Baptist, view from the sanctuary to the entrance in the west. 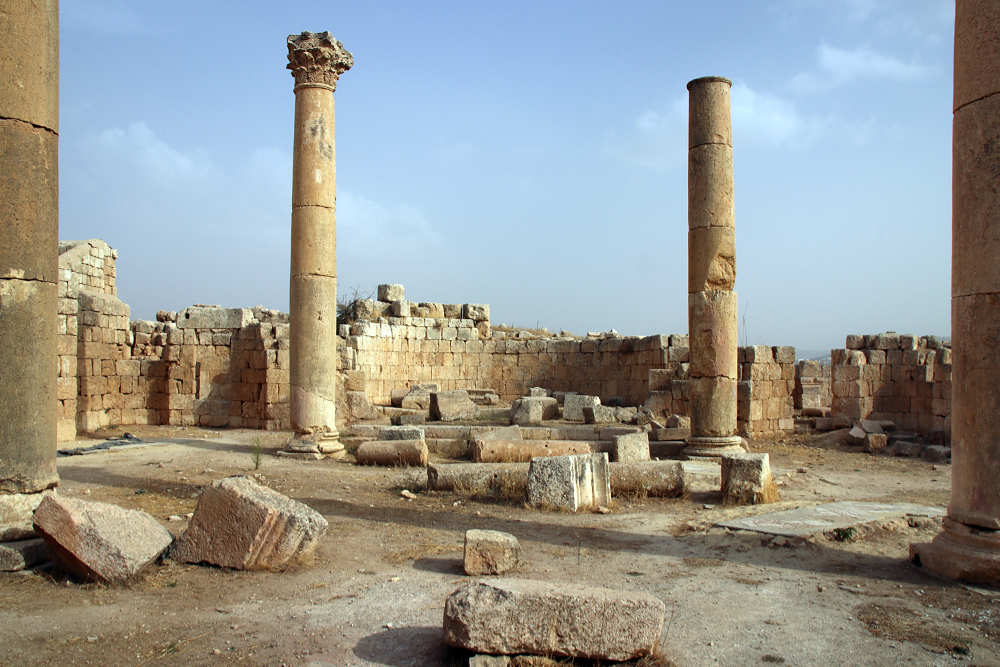 Saint John the Baptist, view to the apse in the east.

On the first photo below, behind the window opening, you can see a room north (left) of the apse, from which a door led to it. It is connected with the adjacent church of Saints Cosmas and Damianus. Originally this was a chapel with a small apse flanked by two chambers, and an altar screen set into a floor support. Later, a baptismal font was set into the floor of the apse (seen in the second photo) and the chamber was used as a baptistery. 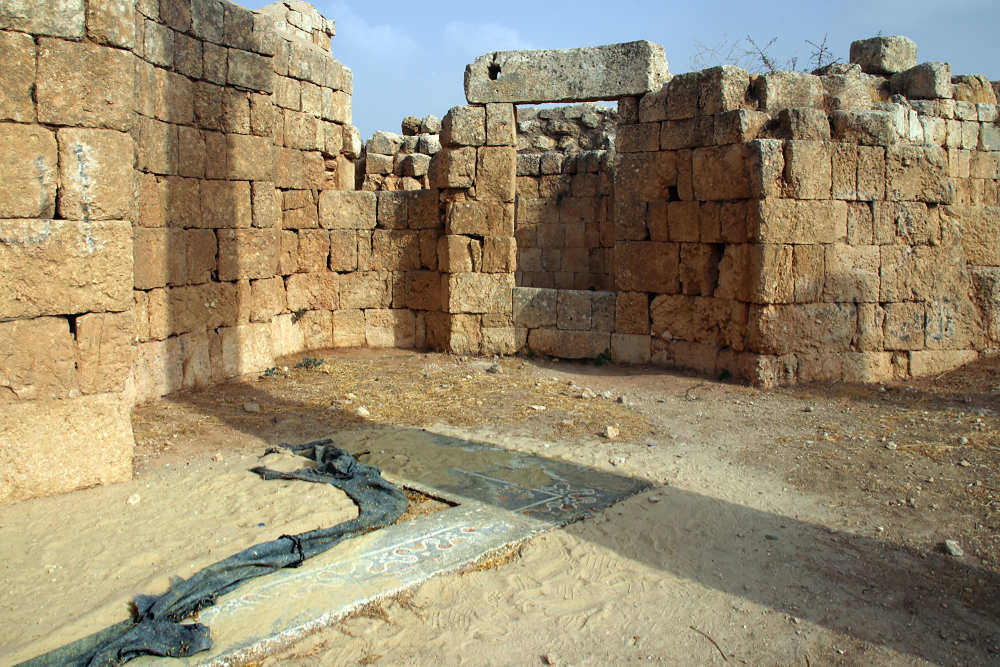 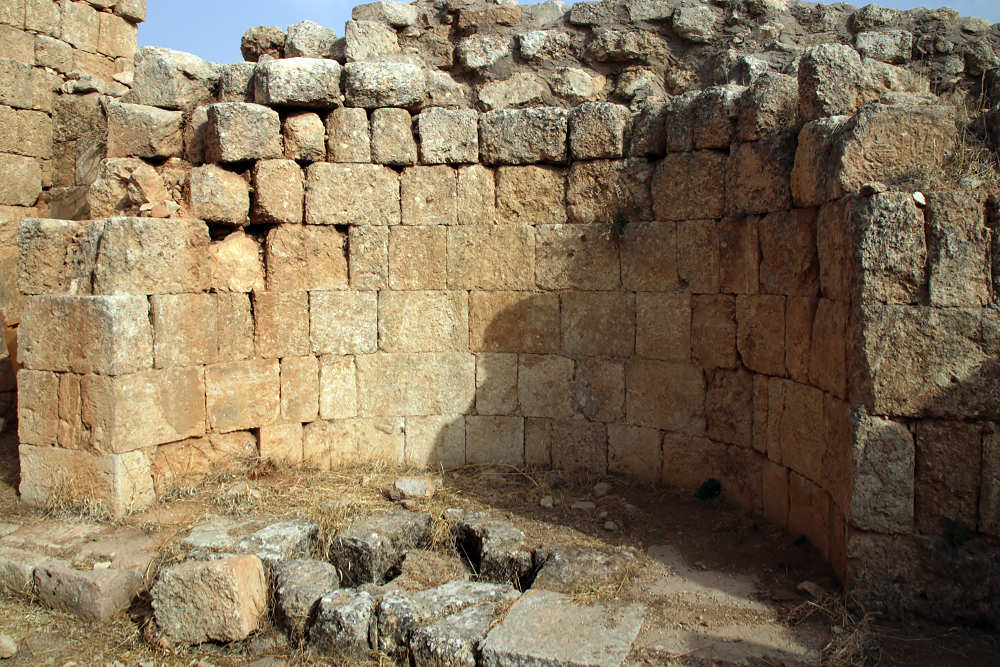 The door on the left of the photo below leads to a room south of the apse, connected to the church of St. George, which probably was the sacristy of both churches. 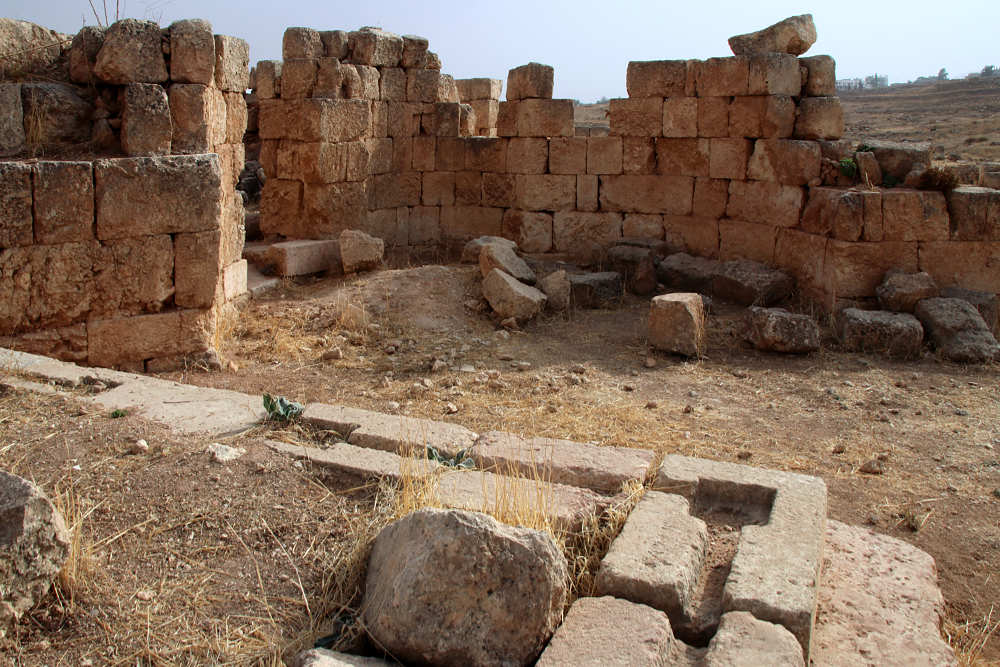 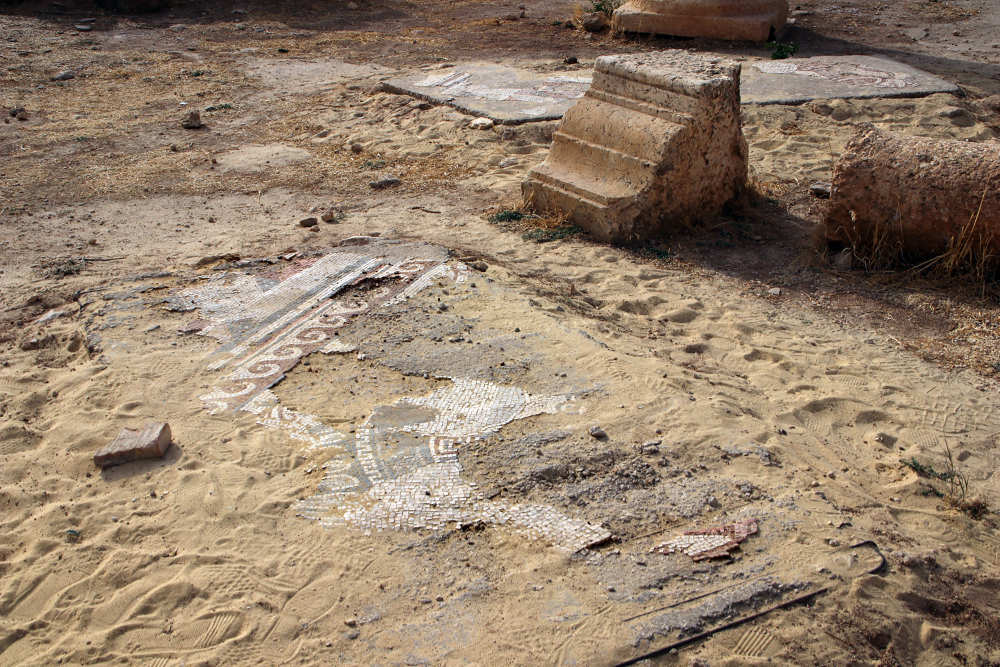 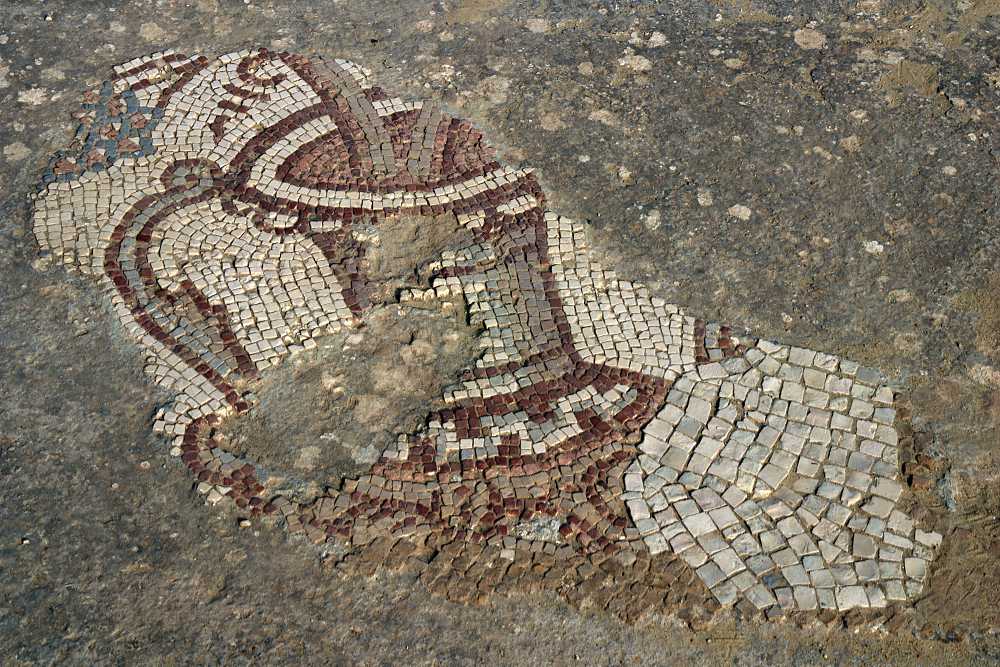 In the ruins are still preserved some fragments of beautiful floor mosaics with geometric and floral patterns and vase motifs, but mostly covered for protection. Some parts are said to be in the Museum of Popular Traditions in Amman.

According to an inscription in front of the chancel, this oldest church of the triple complex was roofed in 529 AD, decorated with mosaics and dedicated to St. George.

The arches that supported the roof of the three-nave basilica rested on pillars instead of columns, just as in the church of Saints Cosmas and Damian. St. George's Church was the only one of the three churches to have a synthron, a semicircular bench for the clergy in the presbytery. The chancel, elevated by steps, reached to the first bay of columns of the nave. The floor consisted of marble slabs in various shades.

As already mentioned for St. John's Church, a chamber with entrances from both churches, to which in St. George's Church a door led to the left of the apse, was probably a sacristy, as was another chamber with a mosaic floor at the end of the southern aisle.

St. George's Church later had to be rebuilt because the ground in the south and west was sinking due to the foundations being too weak, causing arcade pillars to collapse. 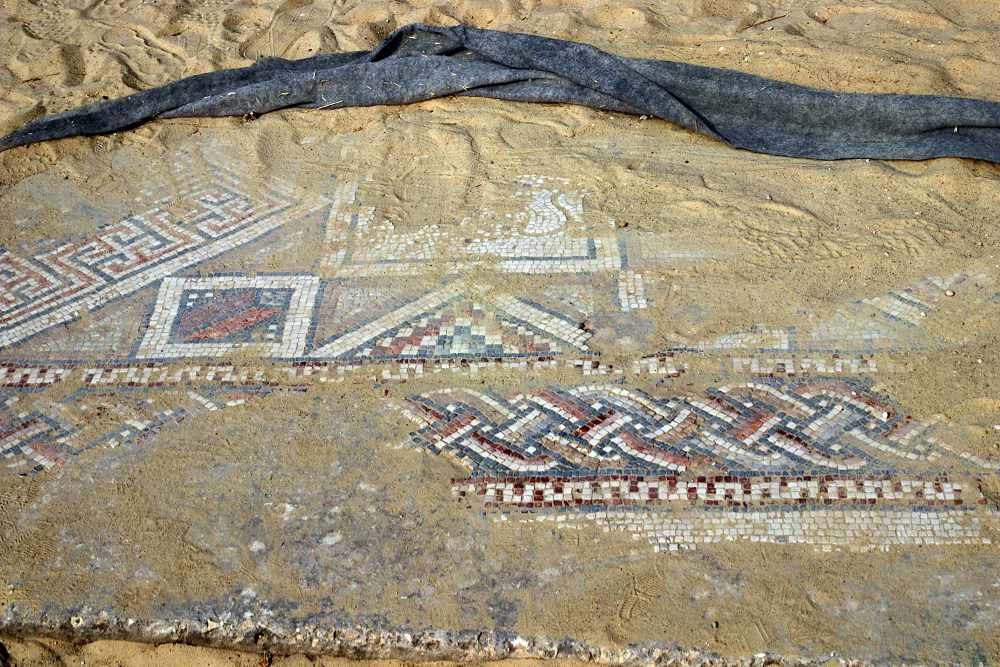 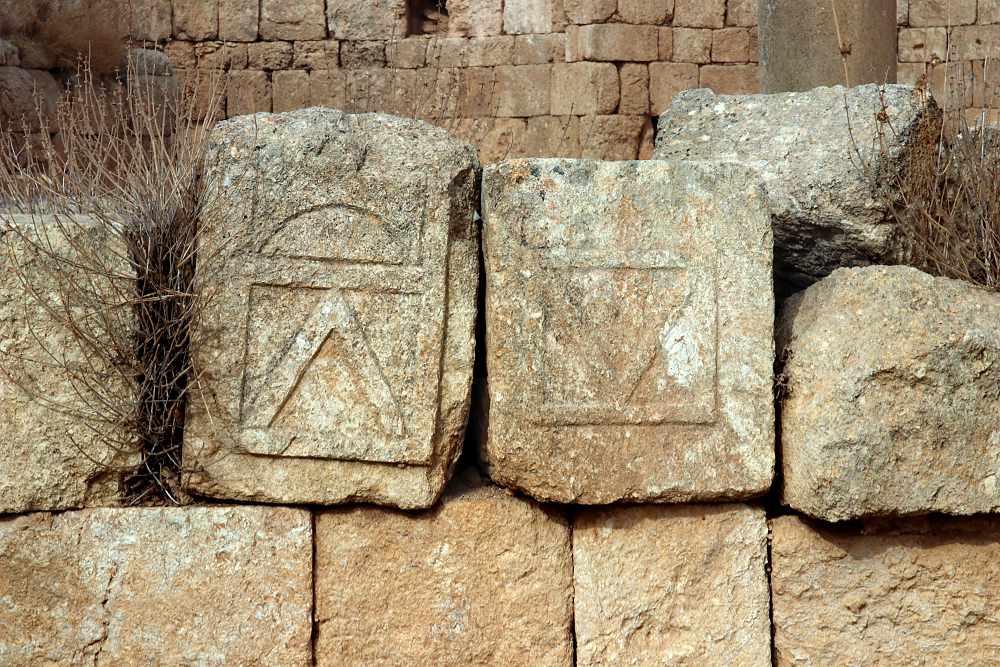 Part of a floor mosaic in the northern aisle and stones with reliefs in the ruins of the church of St. George.

(© Text by Universes in Universe from information in different sources, including Kraeling)