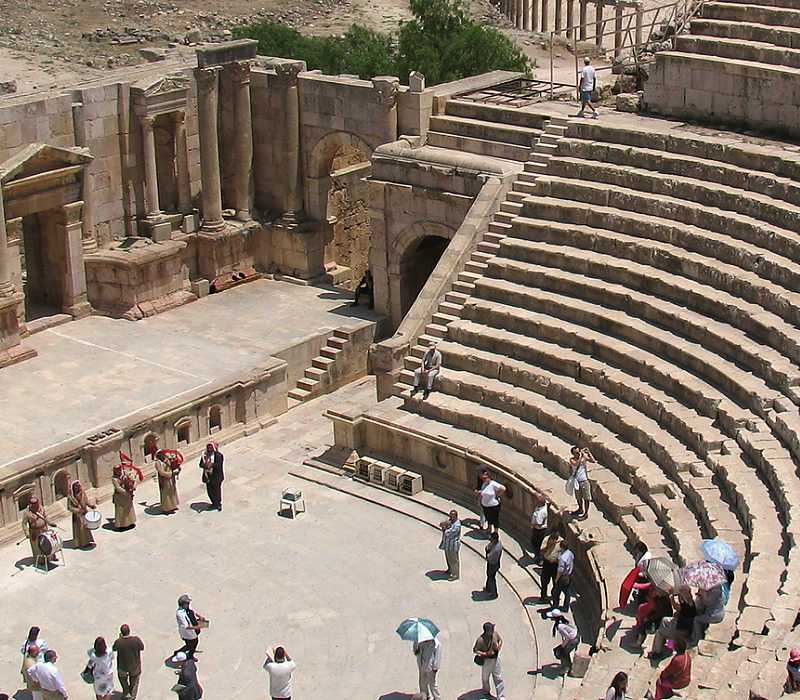 It is the largest and oldest of the three theaters of ancient Gerasa. Others are the North Theater and the one in Birketein, about 1.7 km north of the archaeological site. The South Theatre was built right next to the Sanctuary of Zeus on the west side of the same hill and may also have served cultic purposes. Although residents scavenged stones from here to build their homes until the 1950s, it remained remarkably well preserved. After extensive, though not always proper, restoration and reconstruction in various phases, the South Theatre, with its excellent acoustics, is used as a main venue for the Jerash Festival of Culture and Arts. From the upper rows of seats there is a great view over the archaeological site. The South Theatre can be dated quite precisely by means of several dedicatory inscriptions. These show that the building was inaugurated around 90 AD, during the reign of the Roman emperor Domitian (81-96 AD), but was probably not yet completed, because later inscriptions refer to progress at the respective points of the construction. The various dedications of donors reveal the large share that wealthy citizens of Gerasa had in financing the theater. 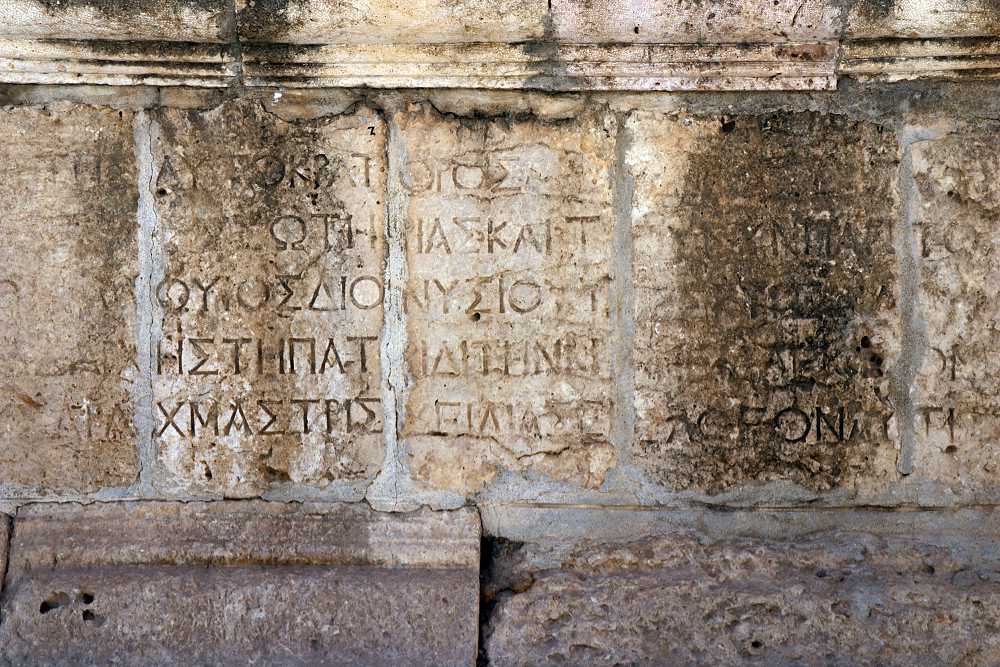 The dedicatory inscription on the wall of the podium between the orchestra and the lower seating area states that the veteran (and councilor) Titus Flavius Epe...., son of Dionysius, paid his hometown 3,000 drachmas for the construction of a kerkis [equivalent to the Roman cuneus, one of the wedge-shaped seating blocks]. 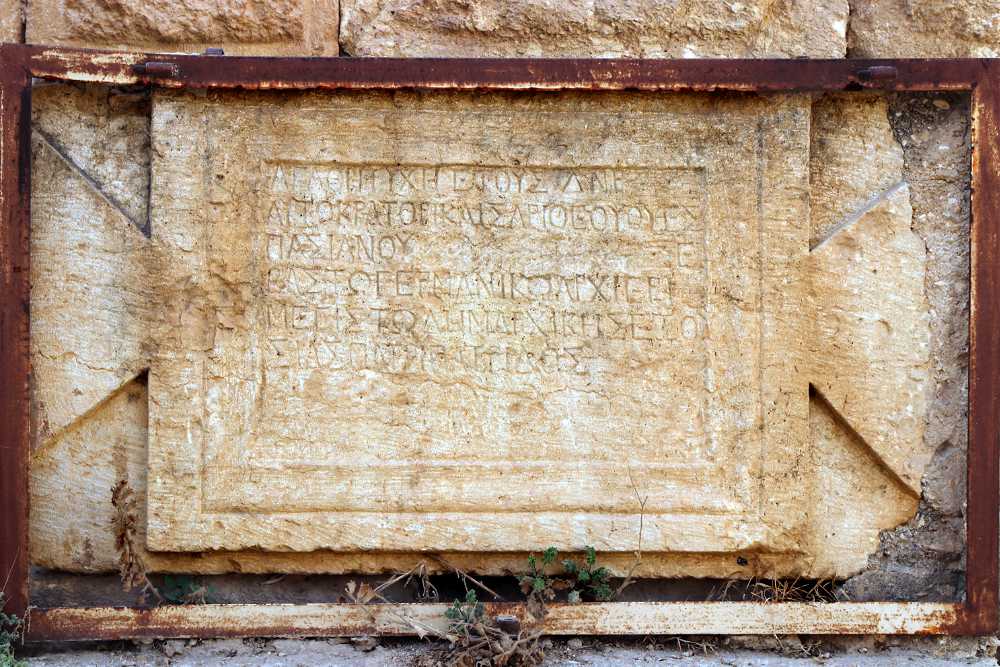 Tabula ansata, now outside the theater: "...In the year 154 [91 AD]. To the Imperator Caesar, son of the divine Vespasian, Domitian Augustus Germanicus,chief priest, holder of tribunician power, father of the fatherland, consecrated the theater by order of legatus Augusti pro praetore Lappius Maximus [governor of the province of Syria]." (quoted from Theatrum) 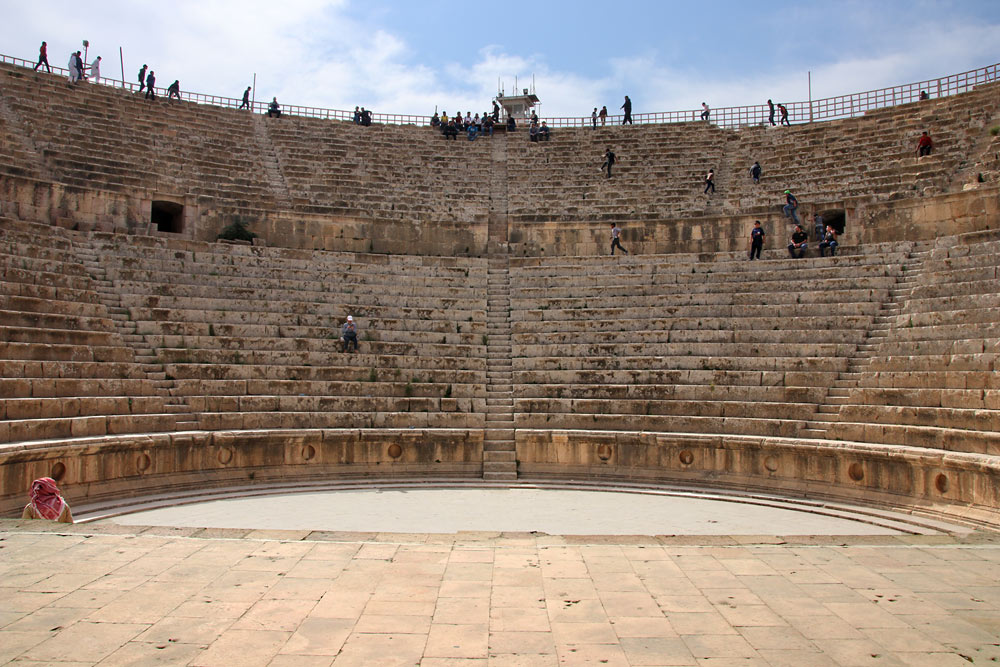 The South Theatre has a total width of 76 m, and from the orchestra to the uppermost preserved row of seats is just over 16 m. The cavea (semicircular audience area) has been partially carved into the hill at the bottom, and faces north so that the audience is not blinded by the sun.

A barrier with circular depressions, in which ornamental slabs were set, and dedication inscriptions (see above) divides the audience area from the orchestra. Seating arrangements in the Roman theater were determined by the social status of the audience. In the ima cavea, the lowest area near the stage for the high-ranking audience, 14 rows of seats are well preserved, divided into 4 cunei (wedge-shaped blocks of seats) with the scalae (radial stairs) between them. At the front edge of the praecinctio, the horizontal walkway between the lower and upper audience areas, there was a 15th row of ima cavea made of stone seats with high backs, some remains of which are placed on the walkway. Together with these, there were a total of about 1,250 seats in the ima cavea. 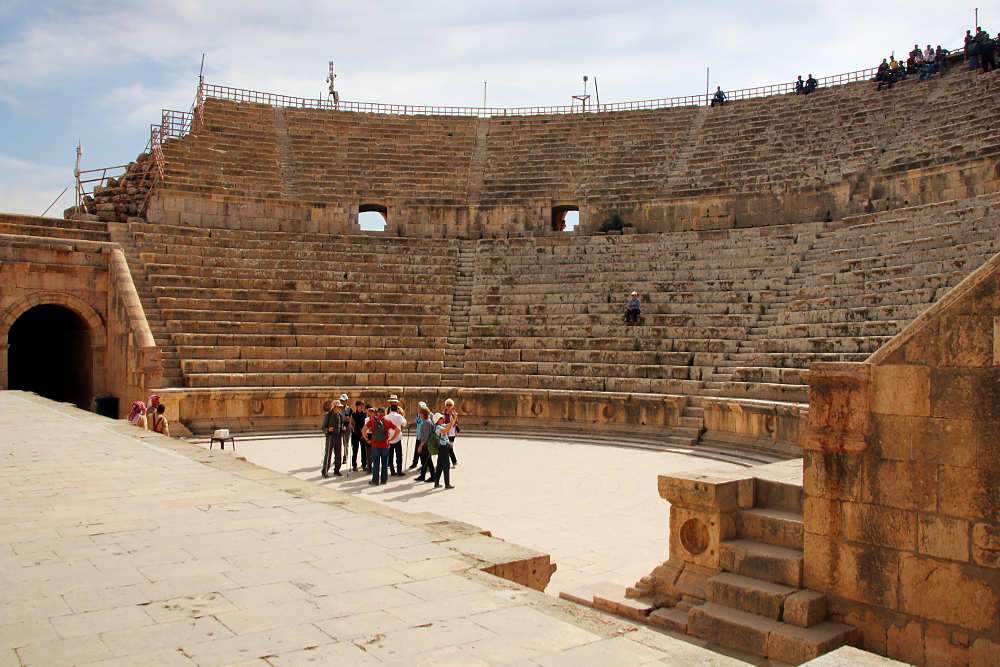 Above the praecinctio, which is about 2.20 wide and surrounded by a high podium, is the media cavea for the next category of spectators, respected citizens. The 15 rows of seats, divided into 8 cunei, seated about 2,200 people. Experts assume that, as was common in Roman theaters, there was another area above it, the summa cavea with about 1,250 narrow seats for the audience from the lowest strata of society.

In total, the cavea of the South Theater could have been designed for up to 4,700 spectators. 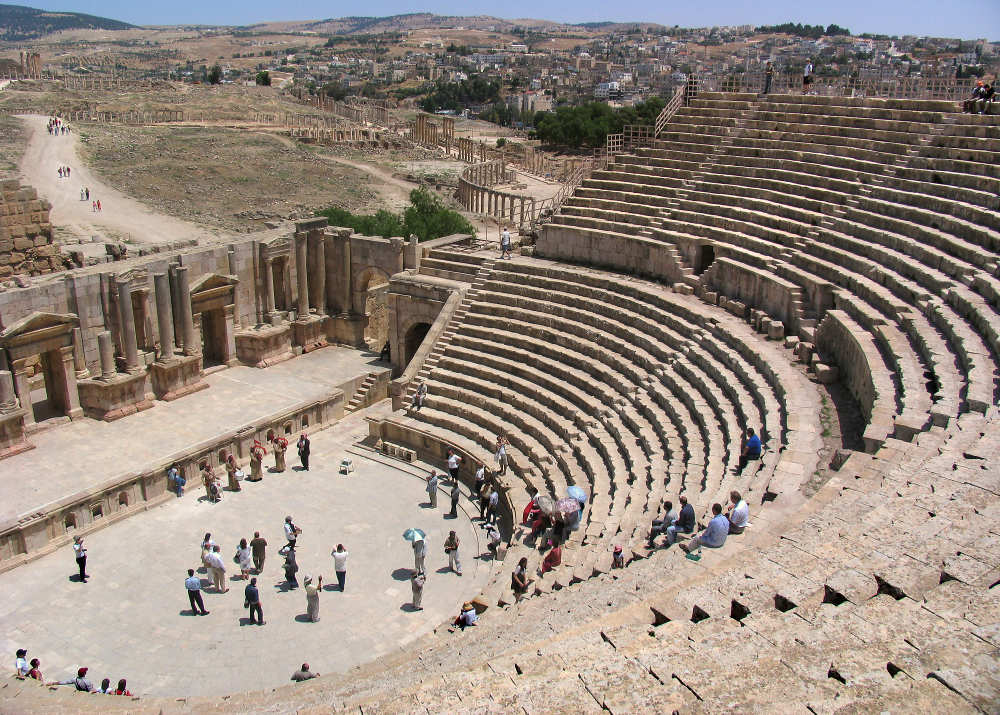 Access to the ima cavea was from below through large gates on both sides of the stage area (one of them is shown in the upper photo on the left). The audience entered the upper area through tunnels, the vomitoria (from vomere - to spit out), with ascending vaults of stone arches adapted to the rows of seats above. 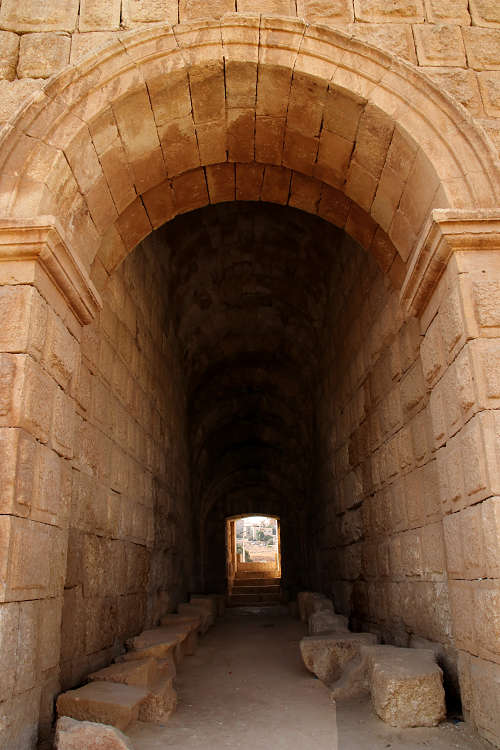 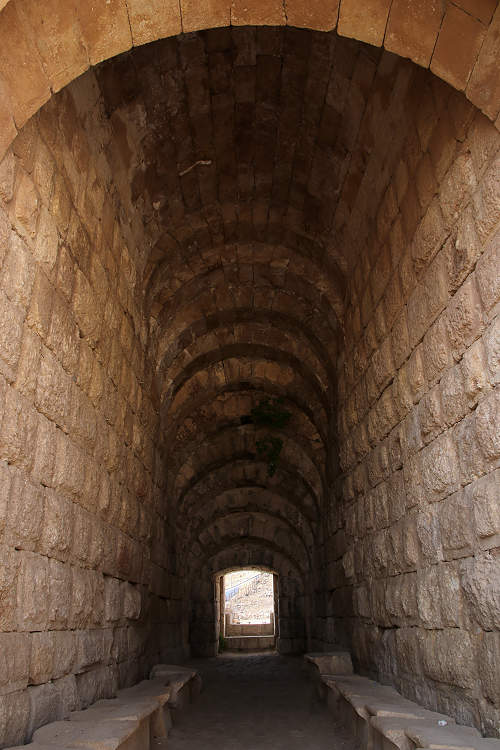 In the classical Greek theater, the orchestra (from Greek for dance floor) was a circular space for the chorus and initially also the actors, before they performed on a raised stage. In the Roman theater, there were no more choruses. The orchestra was reduced to a semicircle in front of the stage. The orchestra in the South Theatre of Gerasa, lined with stone slabs, has a diameter of almost 20 meters.

The stage base on the north side of the orchestra is about 1.50 to 1.60 m high and divided into four sections by five pilasters (87 cm wide, 16 cm deep), in each of which a pedimented niche is flanked by two round niches with shell-shaped ends. The second photo below shows a detail of the central pilaster with an inscription and a heraldic sign (a stylized double-headed eagle?). 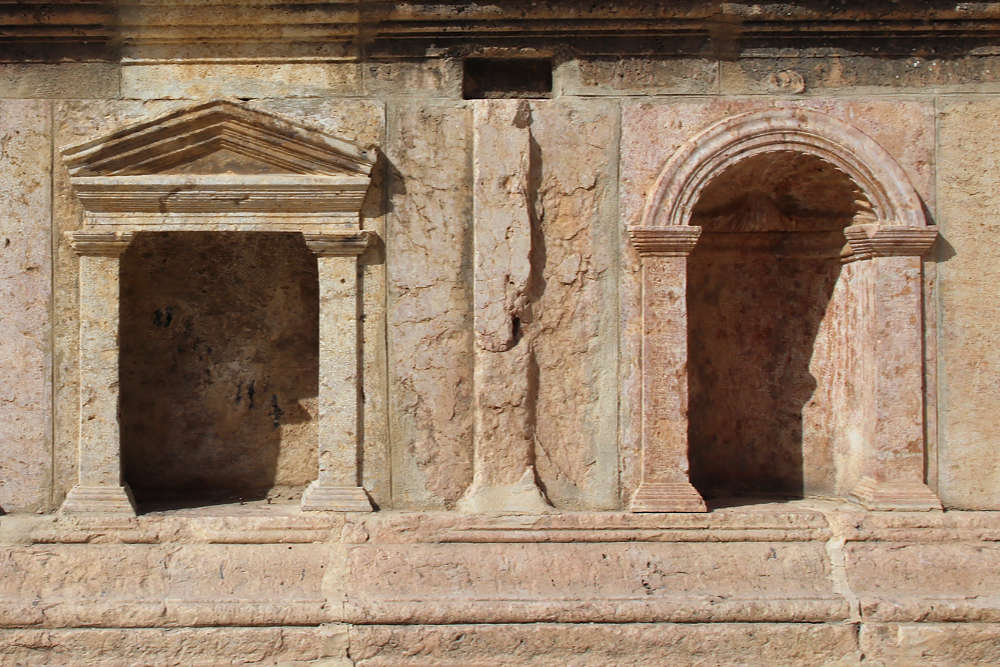 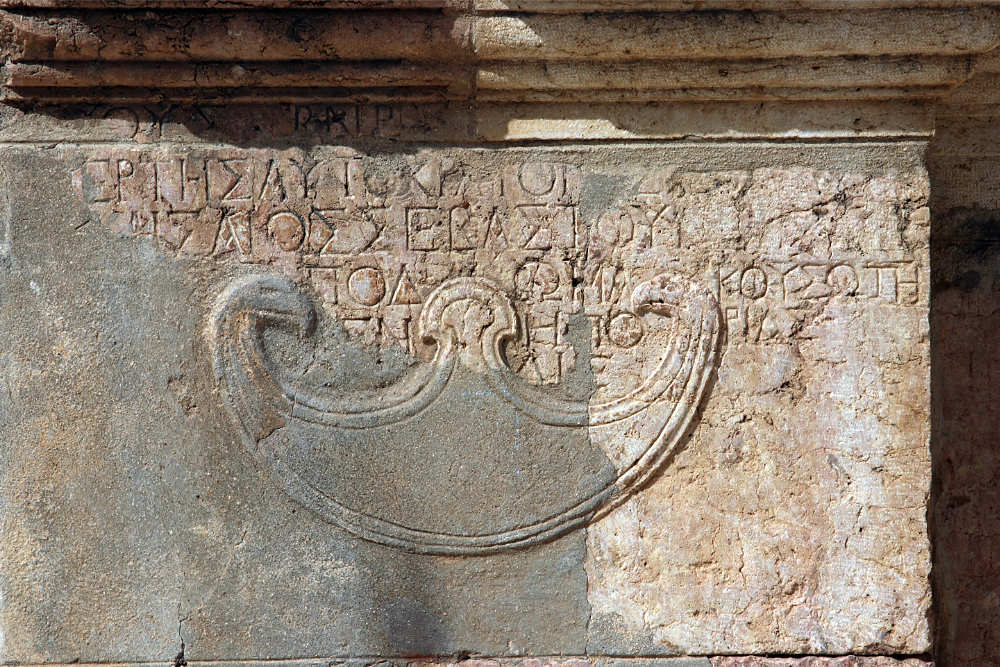 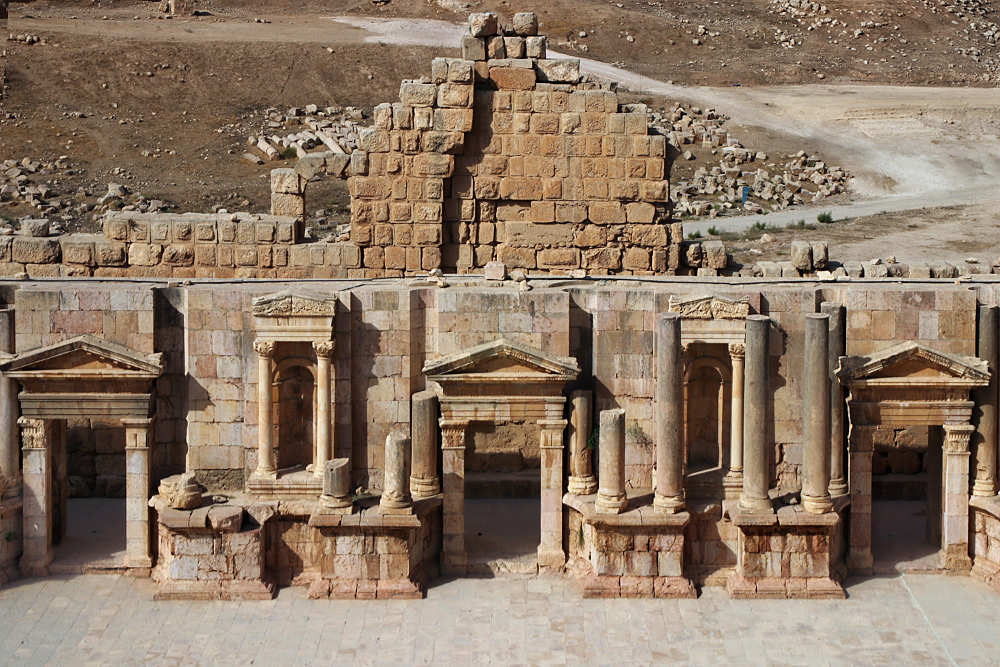 The stage was originally made of wood and was about 6.30 m wide up to the podiums on which the columns stand. Of the elaborately designed, once two-story scaenae frons (stage front), only the lower floor has been preserved. However, many parts of the upper floor were found in the ruins, so there is a pretty good idea of what it might have looked like. The total height of the scaenae frons was about 15.30 m, together with the stage it was about 16.30 m. (Sear and Hutson)

The columnatio of the scaenae frons, the architectural element consisting of free-standing columns, consisted of a total of 68 columns, 34 on each floor. On the lower floor, these included the columns arranged on the four podiums (each about 1.90 - 2 m high and about 2 m deep) (about 5.30 m high with pedestal and capital), those standing on both sides of the stage next to the entrances, and the 8 smaller columns in front of the niches. 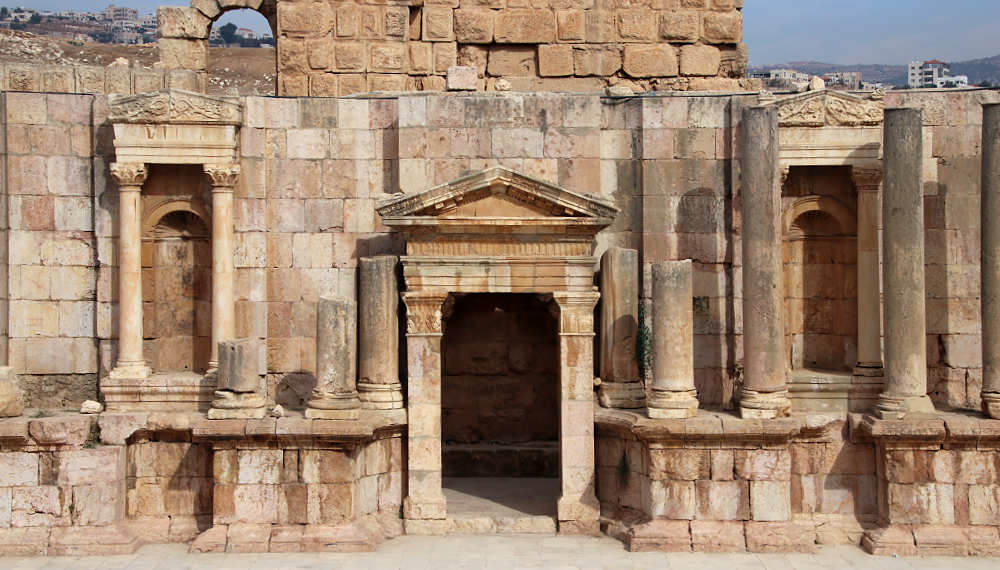 The actors entered and left the stage through the three portals in the scaenae frons, about 1.85 wide, flanked by square pilasters with capitals decorated with two acanthus leaves on each side. They support a 60 cm high entablature with architrave, a frieze with vertical grooves, egg-and-dart frieze and protruding cornice. On the two outer corners of the richly decorated pediment there are acroteria and a round disc in the tympanum. 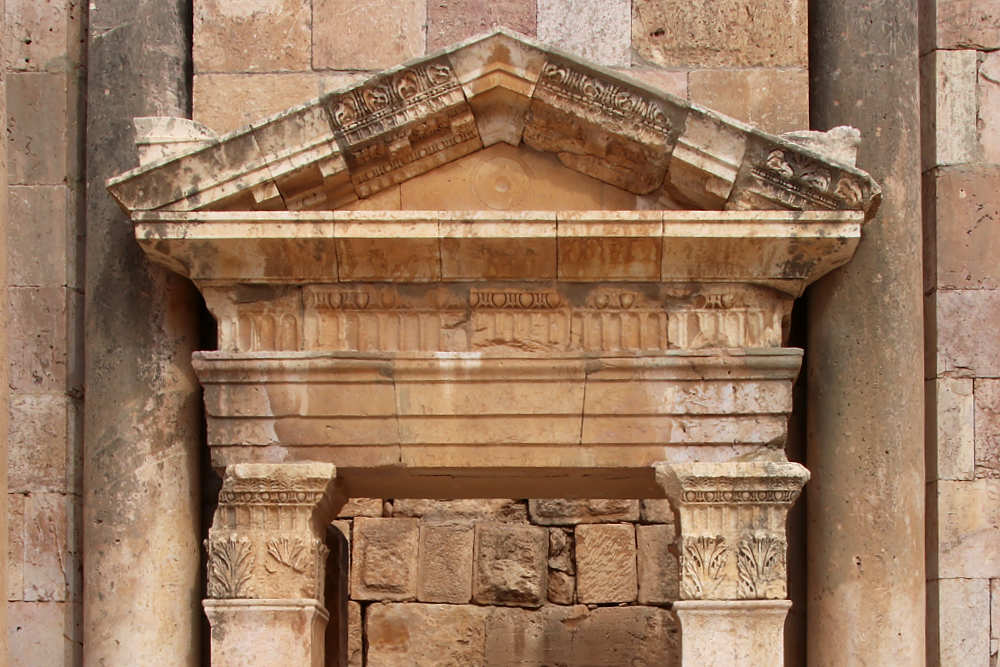 The semicircular niches between the portals, behind the free-standing columns of the columnatio, are finished at the top by a shell shape. The small columns in front of them have floral capitals and also the pediment above the plain entablature is decorated with a floral ornament. In the second photo below you can also see the Corinthian capitals and the architrave of the rightmost columns. 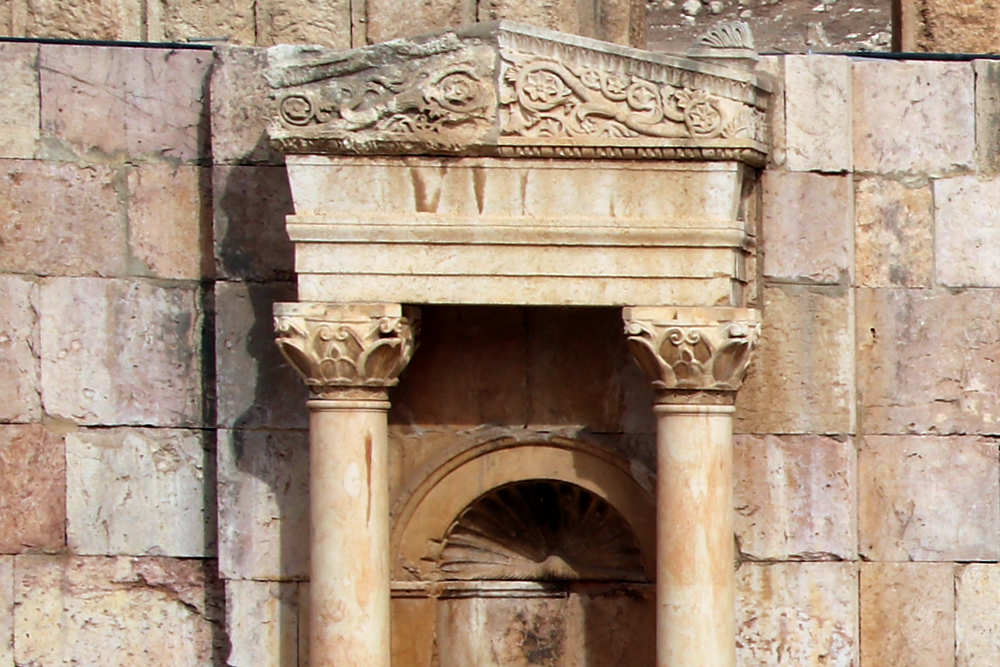 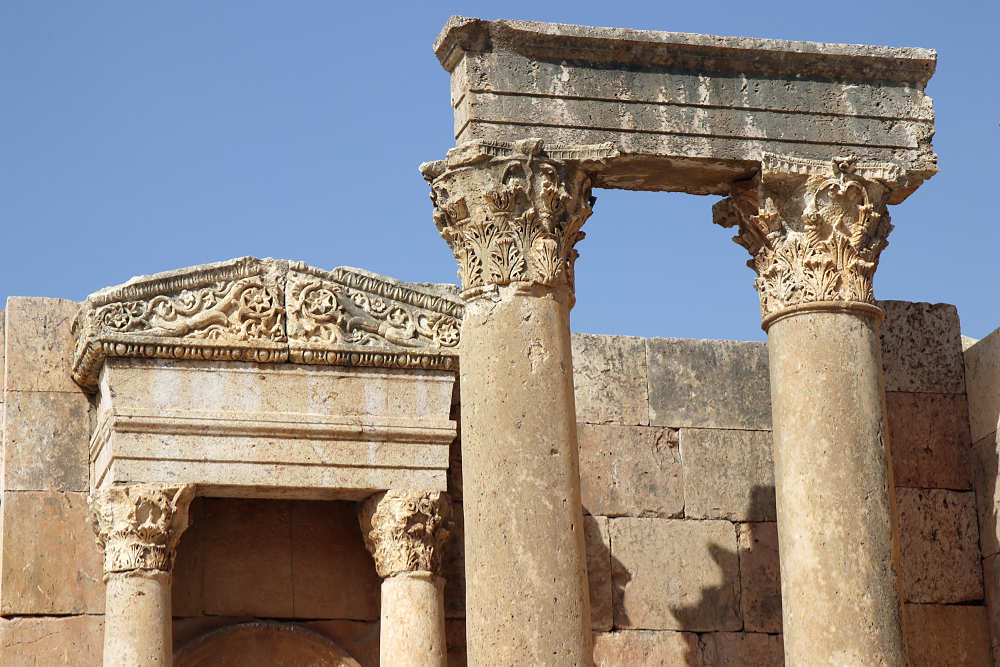 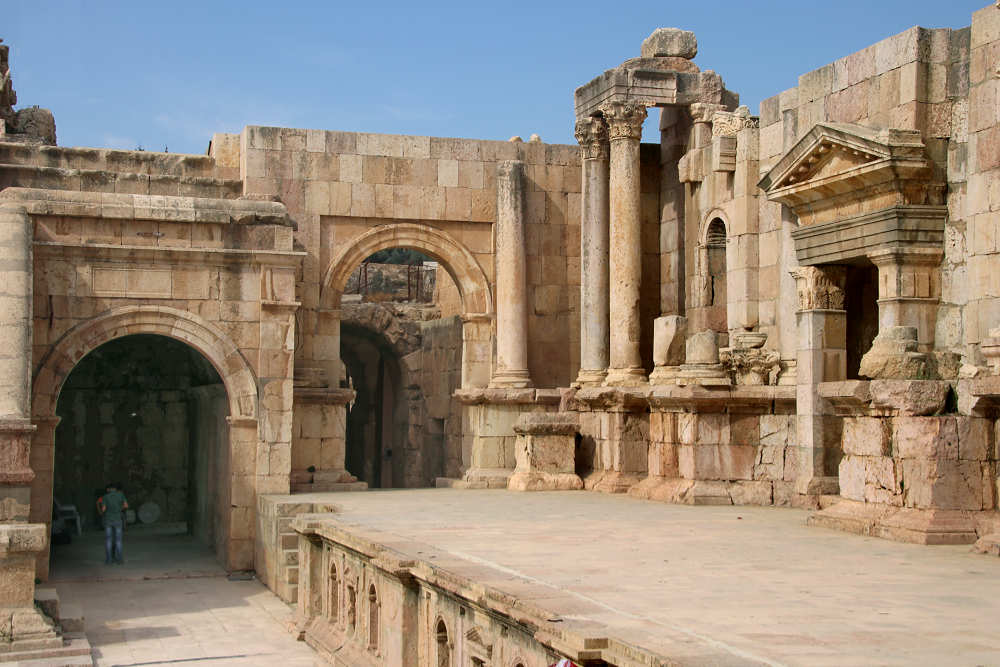 The entrances to the lower audience area (ima cavea) and to the stage on the left side.

The other two theaters of Gerasa in UiU:

(© Text by Universes in Universe from information in different sources, including Sear and Hutson)

The South Theatre at Jarash
In: Studies in the History and Archaeology of Jordan 08, Department of Antiquities of Jordan, Amman 2004. pp. 389-395. Link, last view October 2022