Visitors to the archaeological site are not allowed to enter the temple and therefore can only have a look from a distance through the doorway, which is over 6 m wide and 17 m high, into the rear part of the ruin. There is situated the cella, the cult chamber, the front part of which is as wide as the pronaos (28.6 m) - see the floor plan below.

Along the back wall, the cella is divided into three rooms open to the front. The middle one, approximately square and possibly vaulted, contained the innermost sanctuary: the cult podium (mōtab), the Nabataean "seat" of the deity, on which an aniconic betyl was placed as a medium of God's presence. Two narrow staircases on either side of the 1.40 m high podium enabled priests to ascend to it to perform ritual acts on the betyl. In Nabataean temples, the cult podium was usually designed so that it could be circumambulated. This was not possible here; instead, such processions took place through the portico along the outer walls of the Qasr al-Bint.

The two halls flanking the room with the mōtab probably served for ritual banquets, which seems to be confirmed by parts of cult furniture that have been found. In their open front were two columns with stucco-covered arches supporting an upper floor. Side staircases led to the upper galleries and further to the temple rooftop, where incense offerings were made, and other cultic practices took place.

Floor plan of the Cella 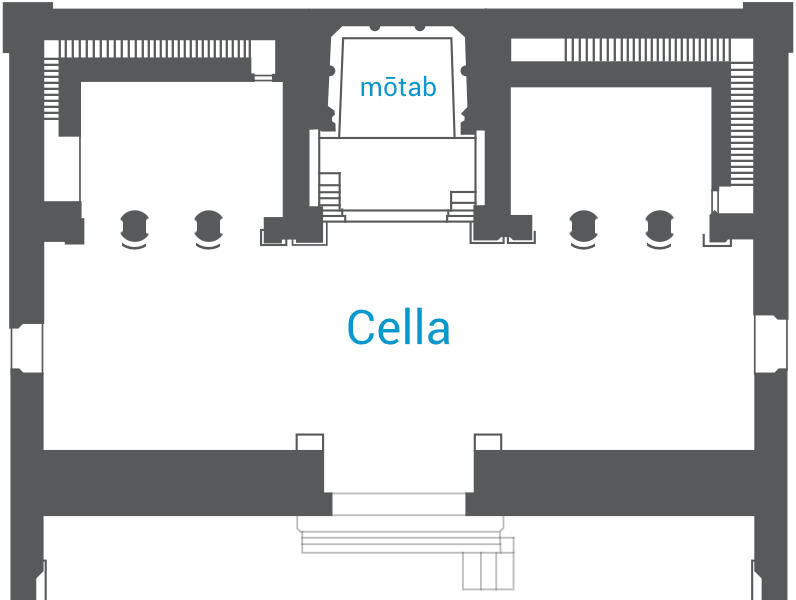