Binder & Haupt: When asked about Fahrenheit 451 three years after its publication, Ray Bradbury mentioned his worries about state-based censorship, due to the fact that he wrote his novel during the McCarthy era, when there was a real threat of book-burnings. Years later, he added that his main concerns in Fahrenheit 451 were the dangers of a society addicted to mass media, as well as the threats to books and the published word by groups with biased interests (religious, political, etc.).

For the Yokohama Triennale, you draw your inspiration from this novel, but formulate your curatorial concept in a much broader sense looking at things that have been erased, banned or discarded, or those deemed worthless of being remembered. This is an extremely wide field, how did you perform your curatorial research in –as you stated– such a vast "sea of oblivion"? 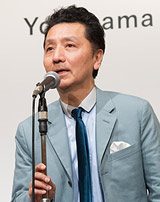 MORIMURA Yasumasa: As you mentioned, the main theme of this Yokohama Triennale is "Oblivion" and it covers an extremely wide field. Therefore, I first wrote down all the phenomena that have emerged in contemporary society that I thought were related to this theme, and then sorted them out by grouping them into islands of ideas. I planned the exhibition so that it becomes a story where the viewer travels through these islands. Whether the contents of each chapter came first or the artist came first in making the decision was different in each case. Sometimes the title and concept of a chapter were decided with the artist who I really wanted to include in the exhibition, while other times, I decided the contents of the chapter first and researched on the artists who would be suitable.

The first chapter is a sort of manifestation of the philosophy of oblivion, represented by John Cage and Kazimir Malevich. By the third chapter, the exhibition starts presenting works and documents that represent the actual society where "oblivion" is enforced; in other words, the world of the novel Fahrenheit 451 which treats hiding, deleting, overwriting, as well as elimination, mind-control, discipline and prohibition as its theme. Here, the theme unfolds as the real representation of "philosophy of oblivion." Following the real representation, the works of artists who have chosen to stay in the "world of oblivion" are exhibited.

"Art is the ability to turn one’s gaze to the world of oblivion." This is the way in which I understand art at fundamental level. The value of art is its ability to look into the "world of oblivion" and to find things that are generally unrecognized, forgotten, invisible and impossible to tell. That is why art is stimulating and interesting. Therefore, to think about "oblivion" is to think about "what art is".

B&H: This year, the Yokohama Triennale appears proposed as a narrative journey, organized like a book with two introductions and 11 chapters. Being yourself a renowned artist, does your edition of the Triennale have to be experienced by the audience more like an event with a constellation of artworks modelled together with an artistic signature, rather than a classical curator's exhibition?

MORIMURA: Since I’m an artist by profession, I took the same process as creating my own work in developing the plan of the exhibition. The process started from the point where I didn’t have any specific vision of how I would arrive at the goal, just like an artist who stands in front of a completely white canvas. After several cycles of trial and error, the outline became clear and the curatorial process progressed. Yet at the very last stage, it took time to complete the process. Everything was finalized at the very last moment, just in time for the opening. It was quite a thrilling experience for me as if I were finishing my painting.

Of course, the process of curating is different from art making. Exhibition-making is a process that involves collaboration with various participating artists. I was worried that I, the artist Morimura, would have conflicts with the participating artists and develop a strenuous relationship with them. But the actual experience was completely the opposite. The artists accepted my requests rather positively, because it came from a fellow artist. I strongly feel that the fact that my being an artist avoided the usual curator vs artist tension, and led to creating a positive atmosphere as well as developing a solidarity amongst artists and building a community for artists. I think the exhibition succeeds in conveying this atmosphere to the visitors as well.

B&H: The selection includes artworks by artists from different generations and geopolitical regions, and most notably, several museum pieces of modern art history. How do you relate them in the exhibition chapters? Do they dialogue mainly on a poetical, conceptual, or on an aesthetical level?

MORIMURA: When we talk about contemporary art and contemporary artists, we usually imagine artists who are alive. But I feel very uncomfortable about placing a border between living artists and dead artists. By putting a border line between life and death, we separate the world of death from our world of life, casting the dead away into the "world of oblivion".

The artists could be dead, but some of them are not so distant from us, and make us feel as if they are alive with us. Such artists are worth calling "contemporary artists".

Leonard de Vinci, for example, is a great artist, but he is living in the past. However, I don’t feel John Cage and Matsuzawa Yutaka as artists who live in the past. Their ideas are still alive in our world because they express the very important concerns of our age. That is why I could trust them as "contemporary artists".

B&H: Are there any artistic projects in this year's Yokohama Triennale that deal with the Internet? It is considered as a huge memory, but substantial information is drowned in the data deluge. And despite being a most powerful publication tool with an enormous reach, it enables unprecedented control mechanisms at the same time.

MORIMURA: No, we don’t have any such works, particularly because my intention was to alert people about digital media, a contemporary communication tool, through the theme of "oblivion".

In Fahrenheit 451, Ray Bradbury raised cautions against mass media, especially the television, which dumb down human sensibilities and coerce everybody’s thoughts into a single uniform value, allowing human to forget the fundamental action of "having one’s opinion". As a result, the society deteriorates. I decided to exhibit Kienholz’s work which features television as its subject, as well as the Big Double Cross as works that represent this warning. I think it is important to be aware that the Internet has replaced the television, and has become a place where the uniformity of human society is accelerated.

One the participating artists, stanley brouwn, refuses all types of documentation. I have been told that he doesn’t even take an airplane. The way to get in contact with him is only by phone call, by letter or by meetings. He is an artist who clearly places himself in "oblivion" in the Internet society. I put priority on such artists who focus on the world of "oblivion" and who consider placing themselves into the world of "oblivion" as fundamental to their attitude for their expression. This is why there is not any artist who takes Internet as the theme. My position is quite the opposite to the current trend of art, but this is exactly why the title of my exhibition is "ART Fahrenheit 451".

B&H: Regarding the special section "Triennale in the City" that highlights local initiatives, is the program independently conceived by the participating individuals and organizations, or in relation to the thematic focus of the main exhibition?

MORIMURA: "Triennale in the City" is a scheme that is of priority for the sponsoring local government. For many local governments, revitalization is an important mission for the local community, and, therefore, the attitude to achieve this mission through the cultural and/or artistic activities should not be denied.

However, this is not the most important concern for me. Of course, I, like the sponsoring government, would like to have as many people as possible visit Yokohama Triennale. This is because I believe that art should not be monopolized by professionals and specialists. I wanted to realize an exhibition that attracts many people without slipping into populism. If many people come to see this exhibition, I think that I have succeeded in supporting the "Triennale in the City".

This time, aside from the official exhibition catalog, we produced a catalog for children, written only Hiragana, or phonetic Japanese characters which are characters that children first learn in school. While I say the book is for children, it is actually a picture book with poems. I wrote the text myself, and I think the most important theme of this Triennale is conveyed clearly in this book, so that everyone and every generation can understand the concept. Furthermore, we produced an audio guide in which I myself talk and navigate the visitors through the exhibition. These collaterals are my response to the "Triennale in the City" scheme.

B&H: The Triennale coincides with two other events in Japan, the Sapporo International Art Festival, and the Fukuoka Asian Art Triennale. How will the proposed interaction among the three take place and made visible in Yokohama?

MORIMURA: I have always thought that it would be nice to not complete the exhibition in one place and close off the others as a result. Exhibitions should connect with various locations and promote exchange and interaction.

I planned to connect with other international exhibitions, not to satisfy my own self-indulgence, but to seek the possibility of turning the exhibition into a space that is open and accessible to everybody but at the same time not under anybody’s possession.

Since Sakamoto Ryuichi, the famous musician and the guest director of Sapporo International Art Festival, was also interested in the theme of "oblivion", we had planned to organize an event together. Unfortunately we were obliged to cancel this plan because he fell ill.

The other unusual approach is including Fukuoka Asian Art Triennale, an international exhibition of Asian art that takes place in the Southern island of Kyushu, to exhibit in Yokohama Triennale as one of the participating artists. Fukuoka Asian Art Triennale (and Fukuoka Asian Art Museum, its supporting organization) had always focused on Asia, from the time when Asian art was still very obscure. I asked them to participate in Yokohama Triennale with a strong confidence on their faithful attitude toward Asia generated through their careful deliberation and research. Their selection of artists has provided me with a different point of view from mine, and has expanded the breadth of approaching the theme of "oblivion in Asia".

B&H: Are there any other topics that you wish to comment upon?

MORIMURA: In Chapter 3 of the exhibition, I am exhibiting "the only book in the world," which is a very important project in this exhibition. It started as a project to develop an original and a single-copy book that includes re-edited literal works, photos and drawings that took "oblivion", "extinction" and "censorship" as the theme. It includes works by Elfriede Jelinek, an Austrian playwright and novelist, Anna Akhmatova, a Russian poet, Kazi Nazrul Islam, the national poet of Bangladesh, and handwritten text and original drawings by Kim Yongik from Korea. This book gives a nesting structure to the exhibition as if another exhibition is included inside the book.

I’m now planning to destroy the book after the closing of the exhibition as part of the closing ceremony. If possible, I would like to plan the performance to burn it in tribute to Fahrenheit 451.

Title:
ART Fahrenheit 451:
Sailing into the sea of oblivion
See the curatorial text