Info / context to the poem

After the head of the SS-Economic-Administrative Main Office, Oswald Pohl, announced in March 1942 that the labor force must be "exploited to the utmost possible limit so that labor can yield the greatest return," working hours at Ravensbrück increased from the original eight hours, six days a week, to eleven hours, seven days a week. In the final months of the war, two twelve-hour shifts were the norm in the armaments industry. Italian prisoner Lidia Beccia Rolfi testified, "Work takes place in two shifts: twelve hours for the day shift with a lunch break for soup, and twelve hours for the night shift with a quarter-hour break at midnight. Day and night, the slave girls work full time, with no breaks, not even for going to the latrine."

The poem "The Night Shift", written by Halina Golczowa in Ravensbrück in 1942/43 and smuggled out of the camp with other documents, probably refers to the inhumane working conditions in the SS-owned Texled factory ("Machines roar, Needle drags the thread, Sharp knife shines...") The workshops were located on the camp grounds. There, the women had to produce prisoners' clothing and uniforms for the Wehrmacht and SS, among other things.

Later, Halina Golczowa is transferred to the subcamp Neubrandenburg, where she has to produce parts for fighter planes. Due to the catastrophic living and working conditions, she falls ill with rheumatism and loses an eye. (C. Jaiser) 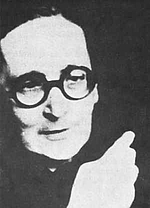 Halina Golczowa was born in Warsaw on September 20, 1901.

During World War II, she worked as a teacher in the Polish capital, occupied by Nazi Germany since September 1939, and was active in the underground. On September 23, 1941 - shortly after her fortieth birthday - she is deported from Warsaw's Pawiak Prison to Ravensbrück concentration camp. Her husband is already dead by this time. Men of the Soviet secret service NKVD shot him in the massacre of Polish soldiers and officers in Katyn. Halina Golczowa has to leave her little daughter Zofia behind in Warsaw.

In Ravensbrück concentration camp, she is assigned prisoner number 7591. She makes an effort to secretly motivate young girls to learn, teaches them, and encourages them to hold on to their love for their Polish homeland. Later, the SS (Schutzstaffel, the Nazis' most important terror and oppression organization) deports her to Neubrandenburg, where she is forced to live in a subcamp of the Ravensbrück concentration camp and is forced to manufacture parts for fighter planes in the "Mechanische Werkstätten" factory. Due to the catastrophic living and working conditions at the forced labor and in the concentration camp, she falls ill with rheumatism and loses an eye.

Halina Golczowa survives thanks to the help of her fellow prisoners. She is able to return to her daughter in Poland, but goes completely blind after an eye operation. After the war, she becomes involved in Warsaw with the elderly and the returning "displaced" and "Ostheimkehrer" (homecomers from the East). She writes children's poetry, works for the children's magazines "Swierszczyk " (The Cricket) and "Piomyczek" (The Little Flame), among others, and publishes an entire volume of poetry. In the last years of her life she is cared for by Olga Dickman, her friend from her time in the Ravensbrück concentration camp. 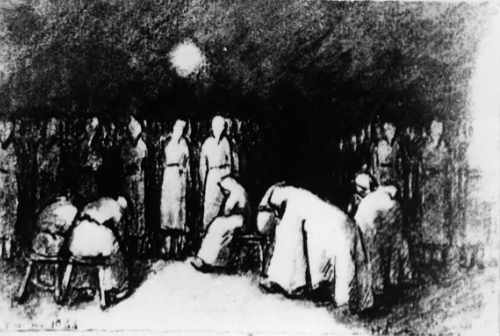 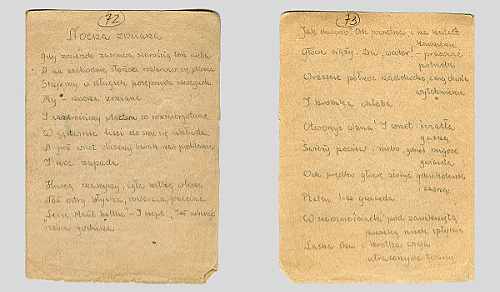 The poem was written by Halina Golczowa in Ravensbrück in 1942/43 and smuggled out of the camp with other poems and documents.
© Staatliches Museum Auschwitz-Birkenau

The sound recordings were provided by Constanze Jaiser for Voices from Ravensbrück.

SS-owned business "Gesellschaft für Textil- und Lederverwertung mbH (Texled)". This had been located in Ravensbrück since 1941. The production facilities - several tailor shops, weaving mills, a furrier's shop, a knitting mill, an arts and crafts workshop, a repair shop, and a straw shoe and cane mat weaving shop - were located in the so-called Industriehof, an area on the Ravensbrück camp grounds with several large workshops. There, the women had to produce prisoners' clothing, uniforms for the Wehrmacht and SS, and items for the SS's private use. 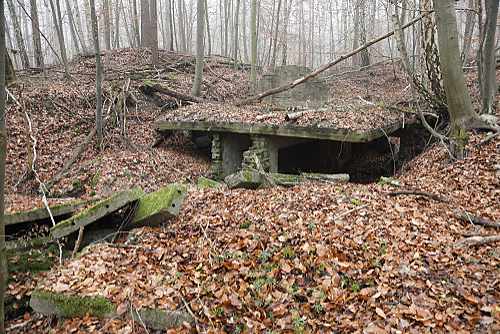 The city of Neubrandenburg in Mecklenburg-Western Pomerania was an important armaments production site during the Nazi era. In the Mechanischen Werkstätten (Mechanical Workshops MWN), around 6,000 prisoners had to perform forced labor for German military production. As part of the inclusion of female concentration camp prisoners from Ravensbrück, the first subcamp was built on Ihlenfelder Strasse in 1943. In 1944, a second underground camp was built in the forest south of Neubrandenburg's city limits so as not to endanger production during bombing raids. In the confined space of the "Waldbau," there were six to seven factory buildings, some above-ground structures and about five prisoner barracks, some of which were dug into the ground, in which about 2,000 female concentration camp prisoners had to live and work.

Publications on the subject, include:

1895 - 1979 Angers, France. Studied art in Paris and then worked as a drawing teacher at a girls' school in Angers. Jeanne Letourneau was arrested on March 13, 1943 and deported to Ravensbrück as a "political" prisoner. In February 1945, she was transferred to the Rechlin subcamp, and in 1945, shortly before liberation, she was returned to Ravensbrück. "I weighed 33 kilograms and was 80 years old," she wrote about her physical condition at the time of her liberation. After her return, she wrote an account of her time in Ravensbrück concentration camp, which she accompanied with her drawings. She taught again at the Angers high school until 1955.