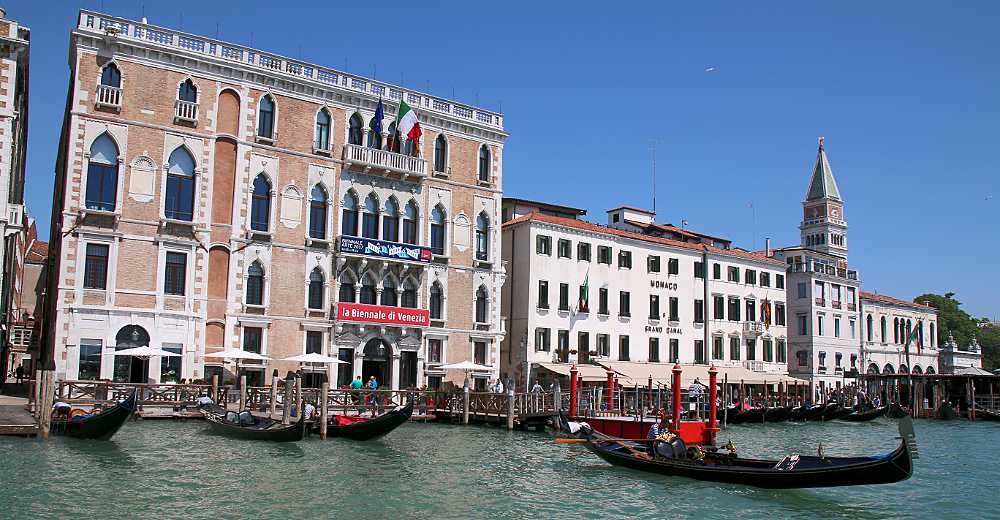 Ca' Giustinian, headquarters of the Venice Biennale, a palace at short distance from St. Mark's Square. © Photo: Universes in Universe

The acknowledgment will be awarded to the four former artistic directors of the visual arts department of La Biennale di Venezia, who recently passed away, each in his own way witness to particularly significant moments in the history of the great exhibitions and La Biennale.

With regards to these awards, the President of La Biennale di Venezia Roberto Cicutto stated: "La Biennale di Venezia’s international standing must also be credited to the work and the originality of its artistic directors, who have marked some of the most significant changes in contemporary culture. La Biennale was the laboratory where Calvesi, Celant, Enwezor and Gregotti expressed their original and visionary critical thinking which looked to the future, often anticipating it. The Disquieted Muses highlights them as the protagonists of an exhibition about the history of the Institution, which marks the beginning of a permanent dialogue among the contemporary arts in the spirit of common research."

The Special Golden Lions will be awarded on September 1st, 2020, at the Giardini della Biennale, three days after the opening of The Disquieted Muses. When La Biennale di Venezia Meets History, which La Biennale presents on the 125th anniversary of its foundation. The exhibition is curated for the first time by all the artistic directors of the six departments, who worked together to review, through the unique sources of the Historic Archives – ASAC and other national and international archives, the moments in which La Biennale met the history of the twentieth century in Venice.

Maurizio Calvesi (Rome, 1927 – 2020) was an Italian critic, art historian and academic. Between 1980 and 1982 he was a member of the Board of Directors of La Biennale di Venezia. In 1984 and in 1986 he was the director of the visual arts department and curator of the 41st and 42nd International Art Exhibitions of La Biennale di Venezia. A professor emeritus of the Università di Roma La Sapienza, and national member of the Accademia dei Lincei and the Accademia Clementina di Bologna, he was considered one of the most influential historians of modern art in Italy. Student of Lionello Venturi and then of Giulio Carlo Argan and Francesco Arcangeli, he was interested in the art forms and authors of the Italian fifteenth and seventeenth centuries, with relevant studies on the Carracci brothers and Caravaggio. He is the author of fundamental essays for the study of history and art criticism, such as those on Piero della Francesca, Dürer, the Sistine Chapel, Caravaggio, Piranesi, but also on Boccioni and Futurism, de Chirico and Pop Art. He held the highest academic and institutional positions in the artistic world: from the guide of the National Gallery of Modern and Contemporary Art in Rome to the presidency of the Artistic and Historic Heritage of the Consiglio nazionale per i beni culturali. Member of the Accademia dei Lincei since 1983, he chaired the Burri Foundation of Città di Castello. He directed the quarterly magazine Storia dell’Arte (founded by G. C. Argan) and founded in 1984 the monthly magazine Art e Dossier, of which he was scientific director until 1995.

Germano Celant (Genoa, 1940 – Milan, 2020) was an Italian art critic, historian and artistic director. In 1997 he was named Director of the 47th International Art Exhibition of La Biennale di Venezia. In 1976 Vittorio Gregotti, Director of the visual arts department of La Biennale di Venezia, had called him to think of an exhibition reflecting on the theme Ambiente / Arte, and then presented at the Central Pavilion of the Giardini with this title. From 1995 to 2014 he was the Director and from 2015 the Artistic and Scientific Superintendent of the Fondazione Prada in Milan, where he curated, among others, the exhibition Post Zang Tumb Tuuum. Art Life Politics: Italy from 1918 to 1943 in 2018. From 2009 to 2011 he was the Scientific Director for Art and Architecture at the Triennale di Milano. In 2005 he served as the Curator for the Fondazione Aldo Rossi in Milan and in 2008 Curator of the Fondazione Annabianca e Emilio Vedova in Venice. From 1989 to 2008 he was the Senior Curator for Contemporary Art at the Solomon R. Guggenheim Museum in New York. Internationally renowned for his theorization of Arte Povera, Germano Celant curated exhibitions around the world and published over a hundred books and catalogues. He was Contributing Editor for the New York magazines Artforum and Interview Magazine, for the weekly L’Espresso, and for the Italian magazine Interni.

Enwezor’s wide-ranging practice spans the world of international exhibitions, museums, academia, and publishing. He was interested in African, European, Asiatic, North and South American art of the 20th and 21st Century, in modern and contemporary art of Africa and the African diaspora. His research focused on video and photography, archives, and the museum, and spanned theories of diaspora and migration, post-colonial modernism, architecture and urbanism.

In 1994 he founded the photographic magazine Nka: Journal of Contemporary African Art, co-published by Duke University Press. As a writer, critic, and editor, he has been a regular contributor to exhibition catalogues, anthologies and journals, and has published articles and interviews in the major daily newspapers and periodicals. He is the author of many books, including Archive Fever: Uses of the Document in Contemporary Art (Göttingen: Steidl and New York: International Center of Photography, 2008), Contemporary African Art Since 1980 (Damiani, 2009, with Chika Okeke-Agulu), Antinomies of Art and Culture: Modernity, Postmodernity, Contemporaneity (Duke University Press, 2008, with Terry Smith and Nancy Condee), James Casebere: Works, 1975-2010 (Damiani, 2011).

Vittorio Gregotti (Novara, 1927 – Milan, 2020) was an architect, urbanist and architectural theorist. In the context of the visual arts department of La Biennale di Venezia (he was Artistic Director from 1974 to 1977) he introduced the architecture as a discipline by organizing various exhibitions. In 1975 he curated A proposito del Molino Stucky at the Magazzini del Sale on the Zattere, which was followed by three exhibitions in 1976: Werkbund 1907. Alle origini del design; Il razionalismo e l'architettura in Italia durante il fascismo; Europa-America, centro storico, suburbio, in the spaces of Ca' Pesaro, San Lorenzo, Magazzini del Sale and the Fondazione Cini. Graduated at the Politecnico di Milano, Gregotti has combined his professional career with an intense one in teaching, publishing and journalism. He published Il territorio dell'architettura (Feltrinelli,1966); Questioni di architettura (Einaudi, 1986), La città visibile (Einaudi, 1993), Identità e crisi dell'architettura europea (Einaudi, 1999), Contro la fine dell'architettura (Einaudi, 2008), Architettura e postmetropoli (Einaudi, 2011), Il mestiere di architetto (Interlinea, 2019). His many projects include the Zen district built in Palermo between the 1960s and 1970s, the campus of the Università della Calabria, the Department of Science of the Università di Palermo and the Belém Cultural Centre in Lisbon. As well as the stadiums in Barcelona and Genoa, the transformation of the Bicocca district in Milan (including the Teatro degli Arcimboldi) and the new residential district in Pujiang, China.