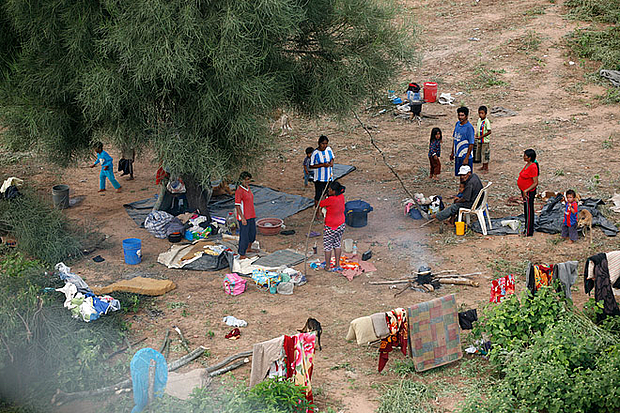 I wish to tell a story in the Sanapana language. My name is Civito Montes and I live in the La Esperanza community, a department of Presidente Hayes. I teach young boys and girls at the local school. We have a history which begins with the ancestors of the Sanapana peoples and how they lived in former times in their ancestral homelands.

Time has passed, yet we seek to bring to life, to regenerate, the history of the Sanapana language and its people. Our forefathers lived on different ranches at a time when the indigenous people knew nothing of the white-man’s food, eating such things as the meat of wild animals and fish, palm-marrows and honey. The Sanapana worked as farmhands on the ranches, riding horses, like ranchers. The place was called Estancia La Selva.

Later, Sanapana families moved to a place called Estancia Amalia to seek a better life for their families. As time went by they left the area where they had formerly lived to go off in search of other territories, finally settling on a ranch, called Clasen, where they came into contact with people of the same tribe as well as Mennonite missionaries, who set about teaching us how to live because Sanapana forefathers had lived according to primitive ways. They even told us how to sing and to speak to others and to set up a home. After all the years of teaching, our people began to recite (prayers) in order to come closer to religion and learn more about the teachings of God.

Afterwards, they moved to Arco Iris, where they lived for seven or eight years. The missionary assigned to them was called Hien Tays. They took part in the religious ceremonies wearing large, wide-brimmed hats. Later the missionary began to look for land on which to settle Sanapana families, so that they could have their own community where they could live in peace. That was how our ancestors lived. After so many years of struggle in search of a land for the Sanapana peoples, they finally succeeded in securing a decent plot of land, which is where we now live in the La Esperanza community. When the first Sanapana families arrived on this land, purchased by the missionary, they began to clear it in order to stake out the allotments on which to build the houses where each of the families would live.

Once they had prepared the land, they began to hew posts out of the wood of the Palosanto tree which they would use in order to fence off their land. While the work progressed, back on the farm, the missionary contributed by handing out food to help the work along. All those years of struggle spent so that the Sanapana families could get their own lands were at an end. Women and young girls also helped by doing the cleaning. Hien Tays stood by to oversee the work. He did not hurry them but rather ensured that they carried out their work in peace and quiet, in reverence to the foundation of the community.

Everything went well. People’s lives began to change. After so many years of hardship, a community was now beginning to take shape. People had managed to secure their own land where they could live in peace. Once everything had been fenced off, we knew that this was our land. The founding members of the community eventually passed away. Now, there are new generations of families who continue the work of running the community. Before finishing this story, I would like to say that it is no bad thing for each people to speak its own language. I would like to add that for the Sanapana peoples there are ways of manipulating the use of numbering for readings.