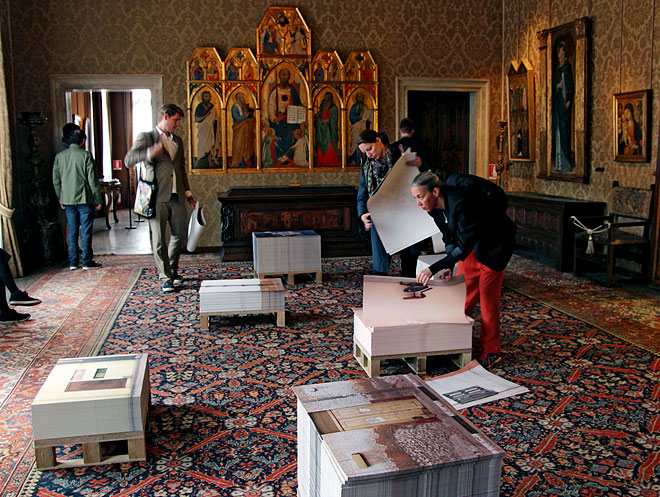 No building can contain a universal multiplicity of spaces, possibilities, and objects. When a building tends towards the encyclopedic, it becomes a city. Research in the Republic of Angola Pavilion concentrates on the country's capital, Luanda, whose encyclopedic complexity derives from the presence of unpredictable and irreconcilable spaces. Edson Chagas's Found not Taken series is the systematic cataloguing of abandoned objects that are repositioned within an urban context to create new relationships between the objects and their context, form, and its codification. In the ambiguity of a vision which uncovers and nonetheless reconstructs, what is delineated is an urban cartography that mixes documentary-like precision and poetic reconstruction: a new way of observing the encyclopedic wealth of spaces around us and, perhaps, a new way of inhabiting them.

The Jury of the 55th International Art Exhibition of la Biennale di Venezia awarded the Golden Lion for Best National Participation to Angola, for the way in which "the curators and artist reflect on the irreconcilability and complexity of site". The Jury was chaired by Jessica Morgan (Great Britain) and comprised of Sofía Hernández Chong Cuy (Mexico), Francesco Manacorda (Italy), Bisi Silva (Nigeria), and Ali Subotnick (United States).