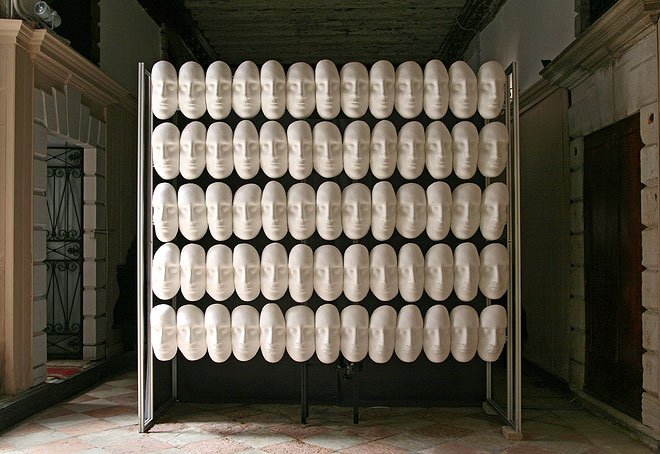 Tamara Kvesitadze’s reflection on visual art surpasses any medium-specific category. Rather, Kvesitadze engages in what Gilles Deleuze in "What is Philosophy" would call a non-philosophical understanding of philosophical matters. In other words, an artistic way of thought particularly confronting the intrinsic violence arising from rejecting a logic of identity or similarity. While resisting such a logic, Kvesitadze denies access to homogenization, instrumentalization, territorialism, or any other condensing anthropological condition. Instead she embraces a focus on mutating processes in the comprehension of the powers and desires of humankind.

A process entailing the force and passion of interruption and metamorphoses is at the core of the work the viewer encounters when entering the exhibition space in the Palazzo. Tamara Kvesitadze’s work F=-F consists of a wall construction where a sculpture of compressed human faces is to be seen: a multitude of nameless faces where, for the sake of a horizontal principle of organization, each form of singularity seems to be have been subtracted.

Behind the wall, the installation Sphere shows the dynamic reality of processes of mutation and transformation, of human beings as the "builders of spheres" (Peter Sloterdijk) – a being aware of once having been forced to live on a globe or a sphere, i.e. worlds to be designed again and again.

A series of fresco-like panels, the work Relationship, stretching from floor-till-roof in the inner courtyard of the Palazzo refers further to Tamara Kvesitadze's modes of artistic thought, its subtracted singularities and its planetary worlds to be designed. Yet, Relationship shows that those worlds involve the dream of different communities based on novel forms of singularity.

The exhibition will include a series of parallel activities such as panel discussions and workshops.

Under the auspices of:
Georgian National Museum
Ministry of Culture and Monument Protection of Georgia

Artist: Tamara Kvesitadze
* 1968 Tbilisi, Georgia. Studied architecture at the Tbilisi Technical University. 1996-2000 worked in the USA making one of a kind dolls. Works with different techniques and materials. Works with glass company ''DAUM'' in France. In 2000 founded Tamarastudio together with Paata Sanaia. Started doing kinetic sculptures. She participated in many international art projects and her works are in different collections. In 2010 she installed 9 meter mechanical, stainless steel sculpture in Batumi.

Commissioner: Päivi Tirkkonen
Has been active in the sector of organization and promotions for the production and creation of contemporary artistic and other cultural events to encourage the cooperation between the main international organisations in the art sector. Has cooperated with the Venice Biennale for the participations of national pavilions and collateral events since 1995.