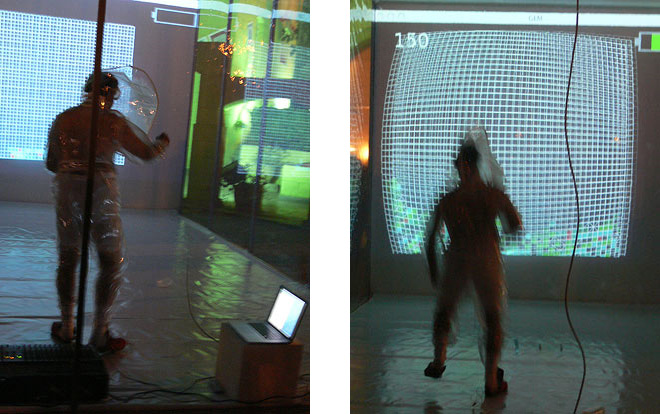 Ahmed Basiony:
30 Days of Running in the Space

On January 28th, 2011 - artist, musician and professor, Ahmed Basiony was killed with several gunshot wounds inflicted by snipers on the Friday of Wrath in Tahrir Square (The 2011 Egyptian Revolution). Ending at 32 years of age, the same period that witnessed the remaining year of Anwar Sadat's presidency, followed by his assassination, and resulting with an Egypt held under the Mubarak Regime, Basiony was what one would consider an emblem of hope to millions of Egyptians, who were determined to live their life for change from a nationally repressed command.

A man who lived and died for his country; an artist honored for his courage and loving mystique amongst his friends, colleagues, and students who were proud to learn from his life, and more-so from the cause behind how it all ended, Basiony's words on his facebook status, on his last Wednesday and Thursday evenings, showed his full determination to continue the revolts in peace though beaten down with police batons:

"Please, O Father, O Mother, O Youth, O Student, O Citizen, O Senior, and O more. You know this is our last chance for our dignity, the last change to change the regime that has lasted the past 30 years. Go down to the streets, and revolt, bring your food, your clothes, your water, masks and tissues, and a vinegar bottle, and believe me, there is but one very small step left… If they want war, we want peace, and I will practice proper restraint until the end, to regain my nation's dignity."

The works on view, will be a two-fold production of works done by the artist, however, it is intentionally designed to reflect a random display of incidents.

A year prior to the uprisings, Basiony had worked on a project titled 30 Days of Running in the Space. Exhibited outside the Palace of the Arts (located across the Nile from Tahrir Square, on the Opera House Grounds*) was a square structure enclosed in transparent plastic sheets. The space was made for a digital and performance-based concept, whereby the artist was to wear a sensor-fused plastic suit he had designed, that would calculate levels of sweat produced and number of steps taken while jogging everyday in the space for an hour - for 30 days (a period reflecting the number of exhibition days). From the quantitative measurements explored while jogging, the data was then wirelessly transferred on a large screen displaying a grid of colors that evolved with the changes explored from the function of everyday energy and consumption.

30 Days of Running in the Space will then be juxtaposed up against another set of screens - this time, an unedited documentation of an unplanned chase for change: Showing raw footage of the revolts on the streets of Cairo, since the start of the risings on January 25th up to the 27th. Basiony, amongst his colleagues, filmed the motions around him, and upon returning every evening home, he downloaded all footage on his laptop - however, the footage on the night of his disappearance on the 28th, was never found.

30 Days of Running in the Space is homage to the raw footage that survived Basiony's sudden exit. A reflection to Basiony's life as a well-respected Egyptian artist, son, husband, father, and friend; a chased consumption who desired change for the betterment of his country - all events for this exhibition were documented on film, and will occupy 5 screens in the exhibition hall, showing randomly side by side.

More information about the artist:
Ahmed Basiony
At the frontline of the arts and revolution. His art projects, teaching, and last days. In Memoriam. By Shady El Noshokaty. In: Nafas Art Magazine, March 2011 (including lots of images)

Thirty Days of Running in Place