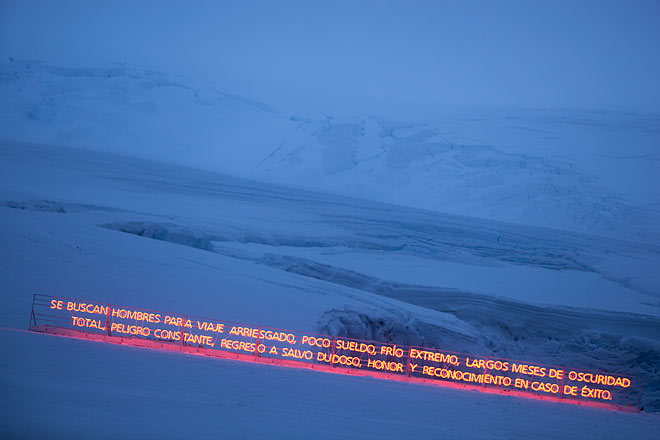 The work of Fernando Prats in the Arsenale shows the powerful reality of the Chilean geography, with topics such as the earthquake and the eruption of the Chaitén volcano.

The assembly consists of three art pieces: an intervention around the impact of the volcanic eruption in Chaitén (2008); a series of works alluding to the earthquake in south-central Chile (2010); and an installation in neon lettering that reproduces the advert that the Irish explorer Ernest Shackleton may have posted circa 1911, calling for men for his expedition to Antarctica.

Prats produces images originating from smoke, through which he manages to sediment natural phenomena such as water propelled by a geyser or the surface of an immense glacier. His technique has been praised by notables such as the French theorist Paul Ardenne who recently included the work of Fernando Prats in the current exhibition at the Espace Louis Vuitton in Paris, highlighting him for initiating "a new way of painting".

With this aesthetic proposal inspired in Chile, its geography and telluric conditions, Fernando Prats seeks to exalt the subject capable of taking a heroic stance. The "Gran Sur" project invites to reflect upon the role of geography in the identity of this country.

A central element of his exhibit in Venice will be the expedition that Prats himself carried out last March to the Antarctic territory aboard the Navy icebreaker, Almirante Viel. Commemorating the centennial of the mythical advert that the Irish explorer Ernest Shackleton would have posted in The Times, Prats installed on Elephant Island the text of said advert:

These words anticipate both the heroism as well as the eventual shipwreck will be later placed in the facade of the Chilean Pavilion at the 2011 Venice Biennale.

Organized and supported by:
National Council of Culture and the Arts
Under the auspices of Cultural Affairs Bureau (DIRAC) of the Ministry of Foreign Affairs, ProChile, Foundation Imagen de Chile, Naval Force of Chile, Galería Joan Prats, Editorial Polígrafa, Embassy of Chile in Rome