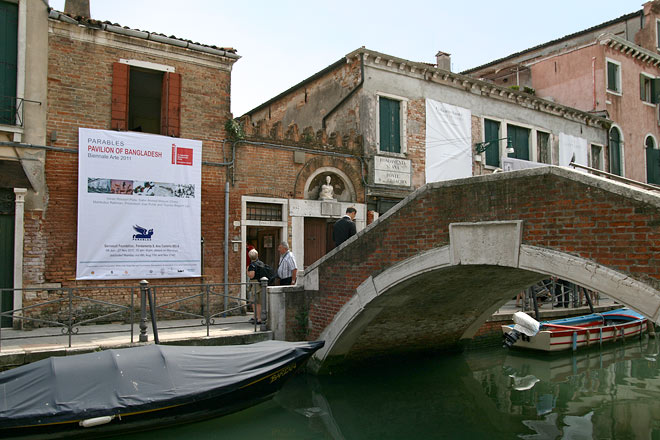 Five renowned representatives of the lively Bangladesh art scene, who live and work in Dhaka – Promotesh Das Pulak, Kabir Ahmed Masum Chisty, Imran Hossain Piplu, Mahbubur Rahman and Tayeba Begum Lipi – have conceived and produced site-specific installations, utilizing the local Venetian architecture, and the history of the Gervasuti Foundation, to explore universal contemporary political, environmental and social concerns, beginning from their own personal, native symbolism and history. ‘Parables’ is an experimental exhibition project that focuses on the unspoken and implicit power underlying the notion of universal truths through art practice. The word ‘Parable’ evokes the origin of the action of drawing comparisons– to juxtapose a familiar concept beside an unfamiliar idea, a process of association that is meaningful in itself and ultimately helps to understand that which is unfamiliar or unknown. Distinct from the conventional and traditional use of parables, which often illustrate a prescriptive subtexts related to a spiritual dimension, a moral attitude or a religious principle, the theme ‘parables’ is used to sketch a scene and set a narrative in order to link and compare different cultural concerns and contexts – a bridge both illuminating and distinguishing two distinct geographical locations.

From a press release