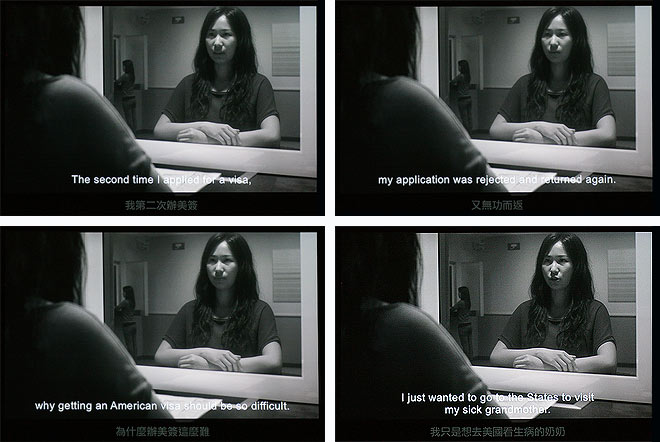 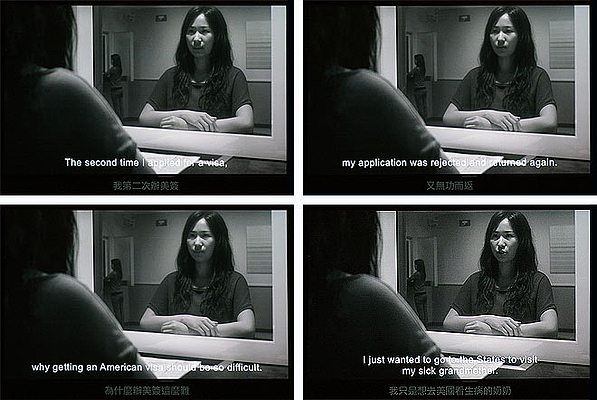 Empire's Borders I. 2008 - 2009
35 mm film transferred to DVD, single-channel, color/ sound, continued projection, 20 documents, 27’
Chen Chieh-Jen (* 1960) has long employed trenchant, poignant images to open up a dialogue with the West about global relationships of history and power, the plight of labour workers under globalisation, and the possibilities of exposition and action. The insulting treatment recently accorded him while applying for a U.S. visa has precipitated discussion of the plight of the Taiwanese people under the post-Cold War, post-colonial, and neo-liberalist global order. The new work, Empire's Borders (2009), is a film that opens showing the various and sundry checks that Taiwanese citizens must endure when applying for a U.S. visa for business, tourism, or family reasons. From there, it discusses how the empire employs all means at hand to penetrate every other area with its imperial mentality. In her interview with Chen Chieh-Jen, Amy Cheng writes that Empire's Borders I goes on to reflect on the internalisation of imperial consciousness within Taiwanese society. In one sense it coaxes out the thinking embedded and internalised in their consciousness, while in another, the acts of writing and speaking about it are the beginning of a movement to "eliminate imperialist mentality." In other words, for Taiwanese citizens this work has the effect of stripping away internalised imperialist mentality and enhancing self-awareness. For the Empire, it is a "foreign affairs" protest at its domineering attitude towards foreign relations.