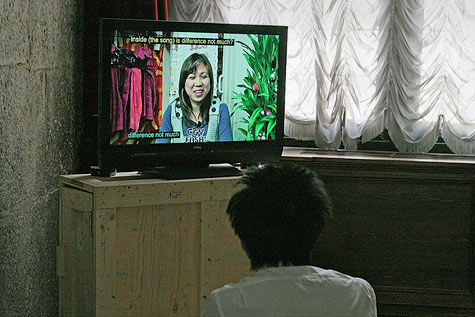 Ventriloquists: Liang Mei-Lan and Emily Su. 2009
HDV, video installation, color/sound
Cheng-Ta Yu’s latest work is a video documentation of two Philippine women who married Taiwanese men and work in the same building in Taipei. After more than a decade living in Taiwan, local language has become a tool in their daily lives, but in his interaction with them, Yu tries out three different languages (Mandarin, Taiwanese, and English), taking on some of their idiosyncratic pronunciations in his conversations. Tip-toeing around the minefields of broken language, misunderstandings and corrupted accents become the norm. To conclude the video with a note of levity, the women sing a song in Mandarin in an effort to liberate everyone from the language barriers that inevitably formed in their conversation, and to dismantle the grave notion of cultural difference.