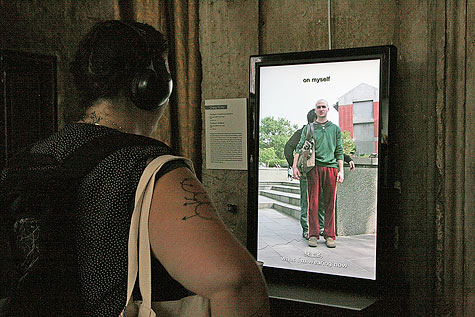 Ventriloquists: Introduction. 2008
HDV, video installation, color/sound
Cheng-Ta Yu (* 1983) is a member of a generation that did not experience the stormy “identity” discourse that led up to and succeeded the end of 40 years of martial law in Taiwan (July 15, 1987). Yet he lives in an age fraught with issues that result from the most varied ethnic groups living together.

In Ventriloquists – Introduction (2008) Yu lurks behind foreign residents of Taiwan like a ventriloquist, getting them to imitate the Mandarin statement he concocted for each personality as they introduce themselves. Over the course of imitation, the unfamiliarity of the imitators with the target language, inevitably results in some unintentionally funny moments and sometimes total communication breakdown, which native speakers surely find especially hilarious. Cheng-Ta Yu’s “broken language diplomacy” is testimony to the possibility of establishing a mixed culture that is lively, optimistic and constructive.