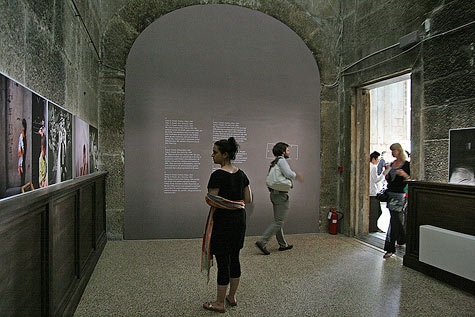 China Town. 1992-2008
6 Silver Gelatin Prints, 7 C-Prints
97.6 x 65.3 cm each
Chien-Chi Chang (* 1961) has long focused on various social issues through the lens of documentary photography. Among his best known works are photos chronicling illegal workers in New York's Chinatown (China Town); The Chain, a series of photographs taken at Longfatang, a controversial psychiatric shelter in southern Taiwan; and the matchmaking and courting rituals that bring Taiwanese men and Vietnamese women together in marriage (Double Happiness). Chang began his uninterrupted observation and chronicling of the lives of illegal immigrants on the streets of New York's Chinatown in 1992, traveling to Fujian province in China to visit their families and relate the unique tales of these people that live on the margins of society. Hong John Lin notes that the most remarkable aspect of the photography process is that "the photographer becomes a part of the subjects' lives, so that a total state of disarmament is reflected in front of the camera." Chang has chosen to work with disenfranchised people around the world, getting along with his subjects for extended periods to establish trusting and friendly relationships, putting foreign affairs into action.