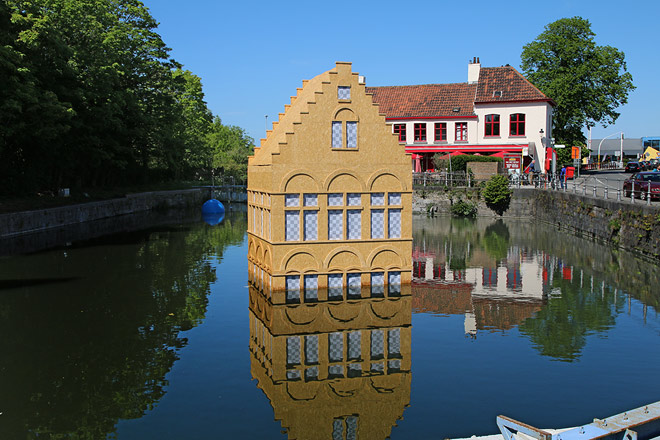 A typical Bruges Gothic brick house. But one that floats on the water of the hushed canals when a storm suddenly breaks out, stirring the water up into churning rapids. The work by Romy Achituv creates a most unexpected rough sea [originally planned was a cataract], precisely at the one point in Bruges where the water, tranquil for centuries, still finds its way to the sea; the last lock where water flows towards the North Sea.

It is as though precisely this water right here awakens Bruges in its memory. Where in the past, goods and riches sailed, today only tourists float by. Today, the lifelines of the past are only occupied by small bobbing boats full of clicking cameras.

Now it is all whipped up. The past. The fossilised picturesque beauty. The illusion of an untouchable past. Water searches for a wild, swirling way around it. In search of new horizons it seems, of a new future.

A shock for tourists and residents that cling on to the picture-postcard image or to rules dictated by the requirements for preserving that greatly admired and unique medieval cityscape.

The storm is a spectacle that fires the imagination. But it is also a powerful metaphor for change. A cataract as rapids that literally collide with this other meaning of the word cataract: a calcified lens that blurs our vision. And that poses the question tempestuously loud: what will happen to this city if the forces of time were to violently question the ideology of conservation and restoration?

What is Bruges to do with its memory if it is brutally shaken up? The architecture, the time, the memory of this city... Reworked by the multidisciplinary Romy Achituv, a contemporary, cosmopolitan sculptor that lives with one foot in Seoul and the other in New York.