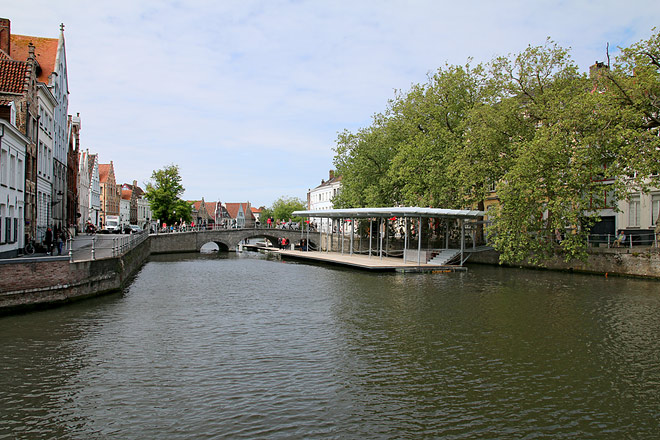 The Japanese architects collective Atelier Bow-Wow floats the platform sculpture The Canal Swimmer's Club on the canals. It is, as the name suggests, a swimming club, for swimming in the canals, but also for all kinds of more random activities. A kind of workshop on the water.

What actually excites Atelier Bow-Wow is the way in which residents and visitors will use and experience their temporary pavilion. They first explore the urban environment and the public space, after which they erect a structure and then it is the users that provide its social added value. They will breathe the life into it.

Swimming in the canals is back in vogue after the remediation work carried out in the Seventies. Since then, various swimming clubs embark on summer courses in the Langerei, to the north of the Carmersbrug. This purely sporty aspect represents the starting point for Bow-Wow's creation of a refuge where Bruges residents and tourists can meet, rest, relax or develop projects. Suddenly anything is possible again in this UNESCO protected environment, which as a result is subject to strict rules.

A temporary intervention can drastically alter relationships between visitors and residents, between traders and customers. Consumers of a space become participants. In a place that suddenly confers the presumption of an unfamiliar, different type of urbanism. A place in Bruges that was previously only observed and photographed suddenly comes to life. As an open, social space. The picture-postcard canals suddenly become a scene, into which you can literally dive, to resurface with a surprising alternative view of the city. Where you may also be viewed as a rare attraction - and why not?

So the Bruges Canal Swimmer's Club joins a number of internationally famous interventions in the public space created by Bow-Wow, such as the Miyashita Park in Tokyo, the BMW Guggenheim Lab in New York & Berlin and their recent contribution to the Swiss pavilion at the Venice Biennial.