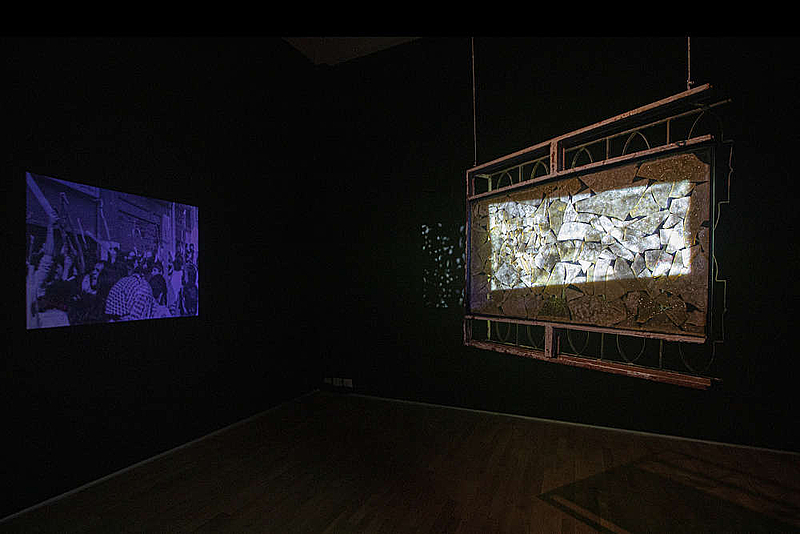 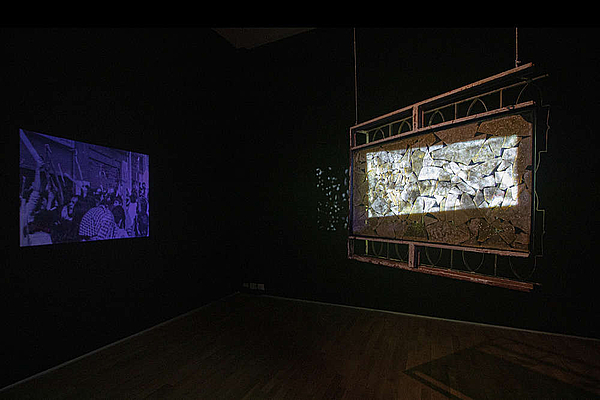 We do not have a salon in our house today, but the image of one in my memory relates to my late father and grandfather, a space that occupied a large part of our old house when I was a child. Almost three decades after salons disappeared in the occupied Syrian Golan, I return to the family salon and try to dismantle and analyse the political and gender relations of the salons of the pre-1990s’ era and how they functioned. I am especially interested in those that existed during the period of the great strike in the Golan that began 14 February 1982 and persisted for six months to reject the decision to annex the Syrian Golan to the state of the ‘Zionist entity.’

Through this project, I present my personal view about these changes and their impact, by collecting the glass of the salon window in my old house and reconstructing a new form of it as an innovative glass window with an iron frame. Light was projected onto this window to form two different dimensions of form and content. In one dimension, light penetrates the transparent glass, from the inside and outside, and forms a distorted image due to some cracks and gaps. This was an attempt to break out through the actual borders of the salon to examine the current Golan Street, which lacks historical, national, patriotic, and heritage content. Another dimension goes through the refractions of light on the decorated yellow glass and becomes a reflection of an internal image that enables us to access the past, and the image of national belonging. This project is accompanied by a multi-layered audio work of various conversations recorded with natural distortions, some parts of which attempt to address the audience.

Sham Abu Saleh was born in Majdal Shams, the Golan Heights. She completed her studies in fine arts at the University of Haifa. Abu Saleh is a visual artist who works on installations, digital and performative arts. Her installations are the result of combining existing material and the remains of places and objects. Her work focusses on public and personal issues, philosophical questions about society and politics reflecting her gender identity as a Palestinian woman. Through collecting material to use in her work, Sham sheds light on the concept of objects and their life progression. She also proposes questions about the nature of remains: What are they? Where do they belong and since when?

Salons - Collections of Memory and Loss