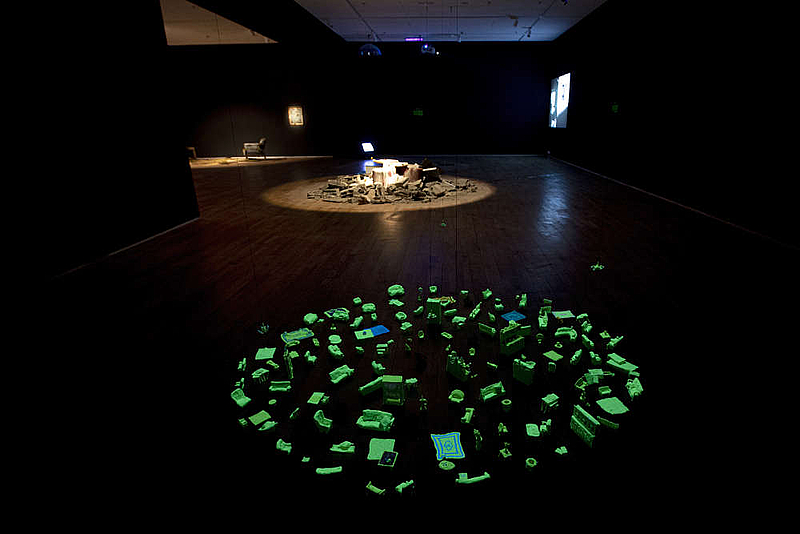 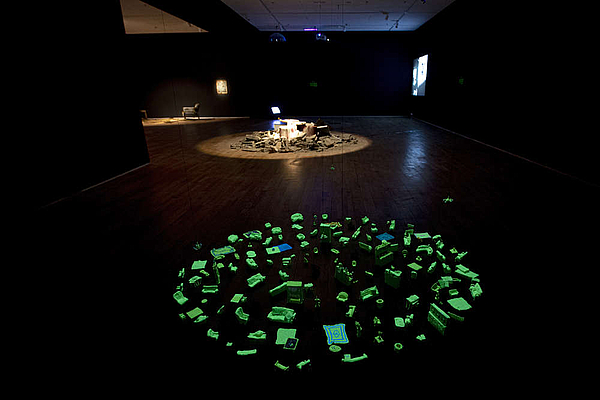 Where There is Much Light, the Shadow is Deep
Installation

I was inspired by my grandmother’s salon where she had everything arranged, such as family pictures of loved ones she lost, souvenirs, icons, African statues, and bottles of aged wine. She also erased from the memory of her salon a portrait of my deceased grandfather. His picture was expected to be found hanging on one of the walls, in his honour. The starting point for me, then, was to search for salons that reflect different times and were composed by women of different generations.

In this project, I used polymer clay that contains phosphorous materials which light up in the dark. I turn off the lights of the salons that I made with my hands, inspired by those created by women who took care to keep them clean and tidy. Then, the finest chair on which the dominant man used to sit on disappears, and we see the dim bodies become radiant, like a woman who radiates when she frees herself from the chains of a man.

Ola Zaitoun was born in Qana village in Galilee, Palestine. She received her second degree in visual arts from the University of Haifa in 2017. Zaitoun works as an art teacher for children of various ages at Ufuq College in Kufr Manda. She participated in several group exhibitions and won third prize in the Young Artist of the Year Award 2018, organized by the A.M. Qattan Foundation in Ramallah. Zaitoun also received the "Lottery" grant for the visual arts in 2019. Currently, she is a student of heritage renovation and documentation in Dar Al-Kalima College in Bethlehem.

Salons - Collections of Memory and Loss