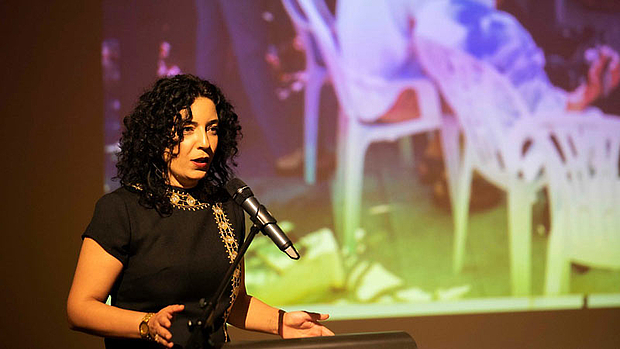 Raeda Sa’adeh was born in Umm al-Fahm in 1977. She received her BFA and MFA from Bezalel Academy of Arts and Design in Jerusalem. She was the winner of the first Young Artist of the Year Award organised by the A.M. Qattan Foundation in 2000.

She was awarded the bronze Chimera at ICASTICA, the first International Arezzo Biennial of Art (2013).

She works primarily in photography, performance and video. Sa’adeh uses her body as the core subject of most of her work. She describes her themes as such: “In my artwork, the woman I represent lives in a world that attacks her values, her love, her spirit on a daily basis, and for this reason, she is in a state of occupation—and her world could be here in Palestine or elsewhere; and despite all, she looks towards her future with a smile.”

Living in Jerusalem, Sa’adeh has extensively exhibited her work internationally, including at the European Parliament, the GEMAK Museum, The Hague, Haus der Kulturen der Welt, the Sydney Biennial and the Sharjah Biennial, as well as in exhibitions in Austria, France, Denmark and others.