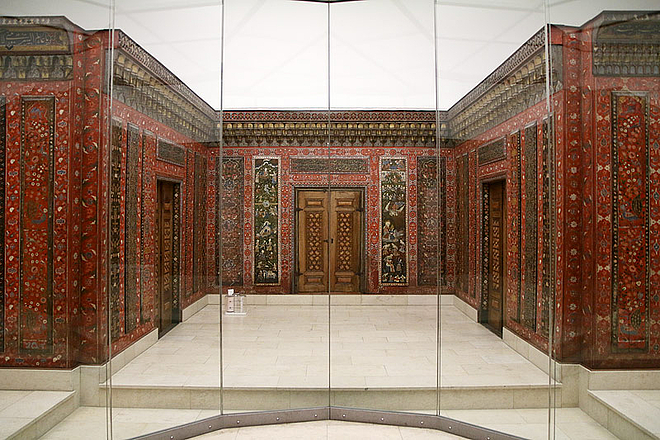 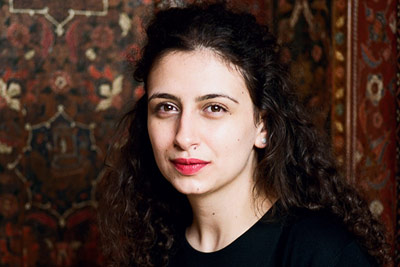 The Aleppo Room is very special to me, as I find it an ideal example of how rich the Syrian cultural heritage is. This richness results from openness towards different cultures, religions and ethnicities, as this masterpiece gained its high value from the ongoing migration and integration of ideas, techniques and people.The painted wooden wall panelling exhibited in the Museum of Islamic Art once furnished the reception hall of a wealthy broker’s home, who was a Christian citizen in the Ottoman Empire at the beginning of the 17th century. In this room he welcomed visitors from other ethnic and religious backgrounds.

The walls are decorated with motifs originating in a large variety of cultures: dragon and qilin from China, Simurgh from Iran, Christian Madonna, scenes from the Old and New Testaments as well as from the popular Oriental love story Layla and Majnun and many others are illustrated in the style of Persian miniature painting on an Ottoman Turkish flower background. The Aleppo Room is also inscribed with several texts mostly in Arabic, some in Persian: Biblical psalms, verses from songs of the Islamic Sufi tradition blessings and popular proverbs.

The Aleppo Room gathers all of these different cultural and religious citations into a harmonious ensemble. To me, it reflects that the Syrian cultural heritage is not only featured as Islamic, Christian, Jewish, Arabic, Armenian or Kurdish etc., but rather as a fruitful dialogue among various artistic traditions. It reminds us that, at the time, Aleppo had been an important merchant city that welcomed influences from all over the world. This provides hope that, someday, Syrians will reconnect with the tolerance, which is integral part of their history and once again live together in peace.

Zoya Masoud
Syrian architect, studied and worked in Damascus, Hamburg, Dar es Salaam and Berlin. Since 2015, she works for the Syrian Heritage Archive Project and Multaka at the Museum of Islamic Art. By 2017, she works at the German Archaeological Institute, where she carries out her Ph.D. research on Aleppo Bazar.