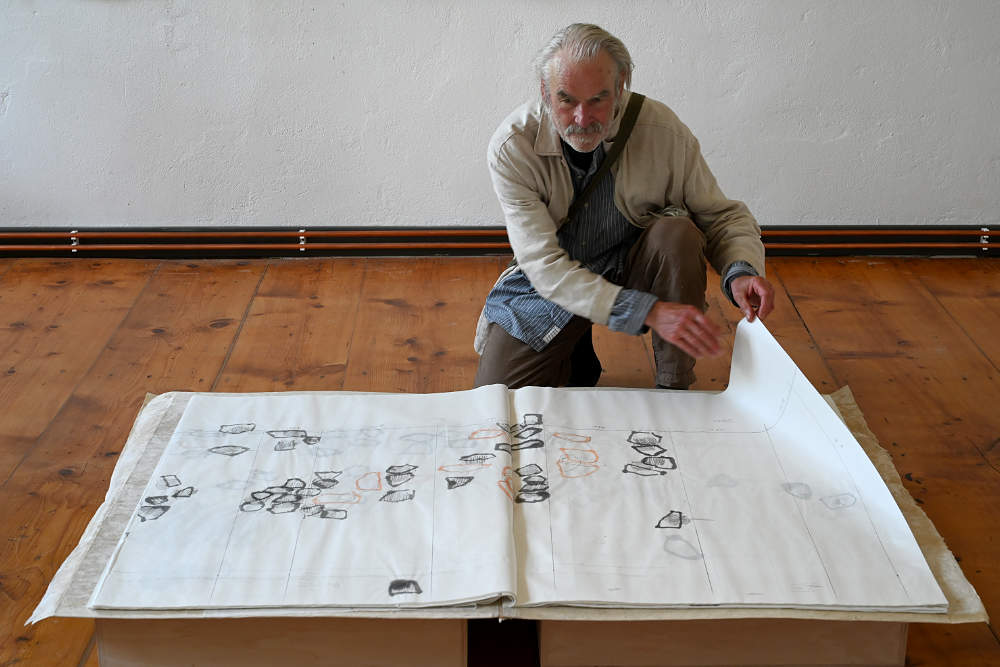 Born in 1949 in Schönebeck (at the river Elbe, 15 km south of Magdeburg). His artistic career began in Leipzig, where he had moved in 1971. He took drawing lessons, devoted himself to material studies and learned to develop and implement ideas collaboratively. In 1984 this found expression in the group of the 1st Leipzig Autumn Salon.

In 1981, he and his family moved into a small farmstead in Huy-Neinstedt (on the Huy mountain range, north of Halberstadt), which today has living and working spaces, and nearby, an orchard farmed by the family. The praise of nature became his concern and in the artist book he found the language for it. Unaulutu. Steinchen im Sand (1983-1986), a book work with Frieder Heinze dedicated to the Karajá indigenous people of Brazil and a graphic testimony of that time, was published by Reclam Verlag.

The process of papermaking had already shown him its three-dimensionality at the end of the 1970s, and since then he has worked on it on both sides. After 1989, the Wolfenbüttel books Mikrokosmos and Anna Ebin were created. The handling of plants in his fruit landscape led him to the intensive study of nature. Since 1995 an artist herbarium of this area continues growing.

With the Leipzig Collotype Workshop, he developed gelatin printing as an original graphic technique. In 1999 he received the Art Prize of the State of Saxony-Anhalt. From 2003 followed Stein, Pflanze, Tier, Mensch, Land, a floor work in Berlin. For the Werkbund Munich the idea of a "Respected Area" was developed, implemented in 2006 on the Beerwalde slag heap near Ronneburg. Based on this idea followed until 2008 the design of the "Denk Ort" on the site of the destroyed synagogue of Halberstadt.

In 2009 and 2011 he crossed Germany on foot with his son Lienhard along the 11th degree of longitude from north to south between Fehmarn and Zugspitze and along the 51st degree of latitude from west to east between Geilenkirchen and Görlitz. A picture scroll and the painter's book geradewegs - quer were created. In Rostock followed in 2015 the sculpture Wir woll'n die goldn'e Brücke bau'n.

He is currently working on the books Falter-Elegie and Noch fühle ich's. The latter is based on studies of the Huysburg Herbarium in the Herzog August Library. Since 2018, he created the work ASLSP live stones for J. Cage.

In 2021 he received the 27th Antiquaria - Prize for Book Culture.

(Based on a text by Olaf Wegewitz.
© Translation from German: Binder & Haupt, Universes in Universe)