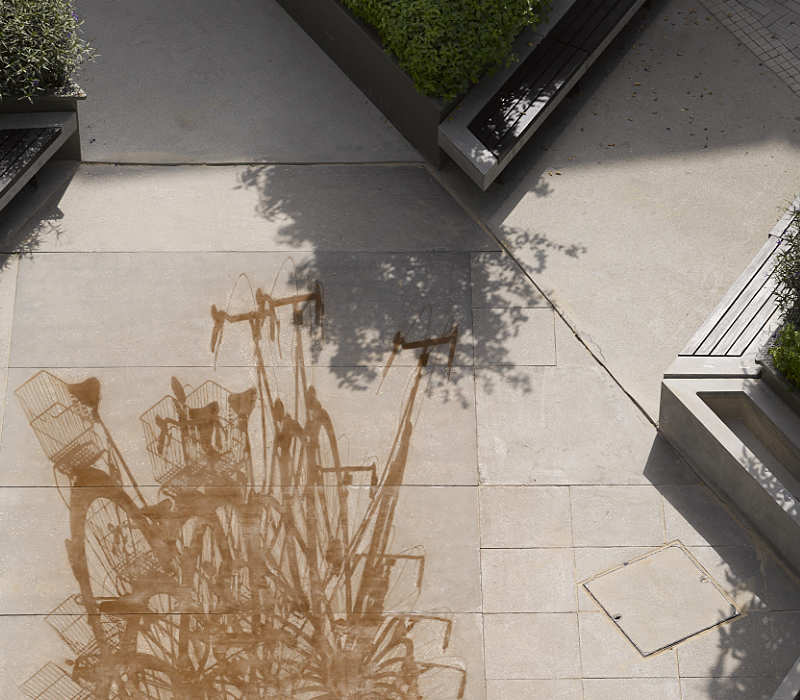 One Day on Two Orbits

One Day on Two Orbits is a permanent floor sculpture by Nadia Kaabi-Linke that shows the shadows of a bicycle on the ground over the course of one day, following the gradual transition from day to night, from the sun to the moon. While the bicycle itself is invisible, the shape of the revolving shadow forms an image reminiscent of astronomical photographs of distant galaxies.

The work pays homage to Ibn al-Haytham, who introduced the idea that the sun and the moon revolve on geometrically and temporally different orbits. This discovery led to a better understanding of both space and time on Earth and explained the existence of two calendar systems. One Day on Two Orbits is a memorial for a celestial discovery that not only relocated the Earth in the solar system, but also harmonised different cultures of time. 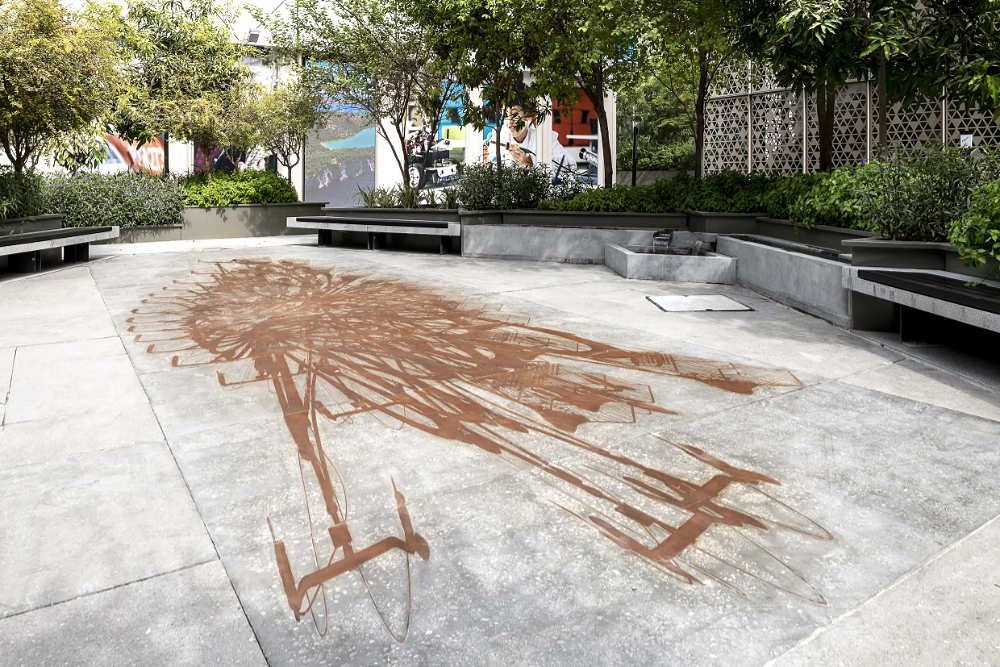 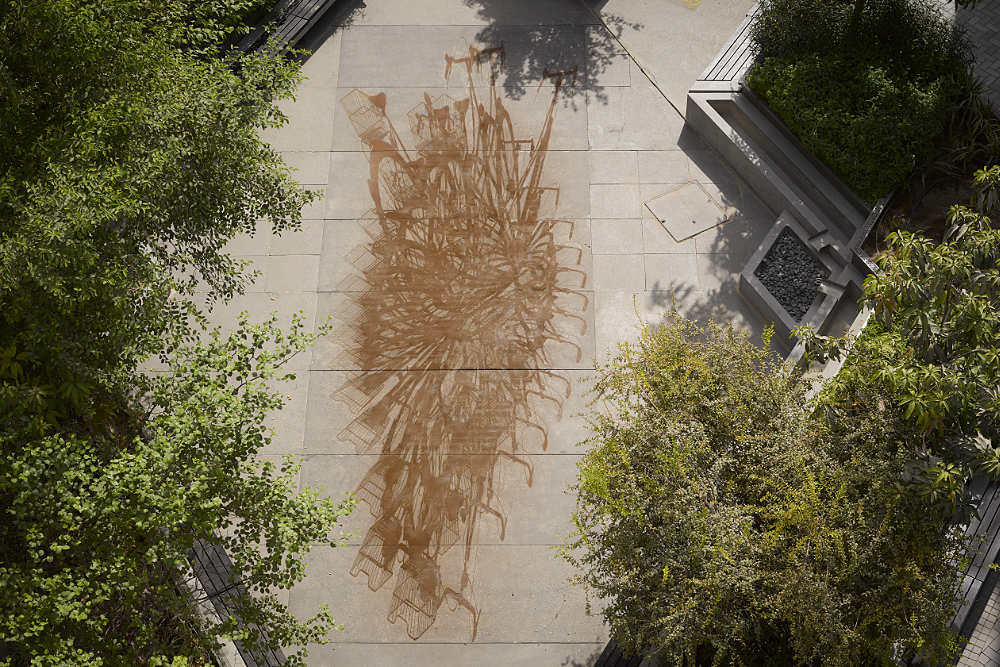 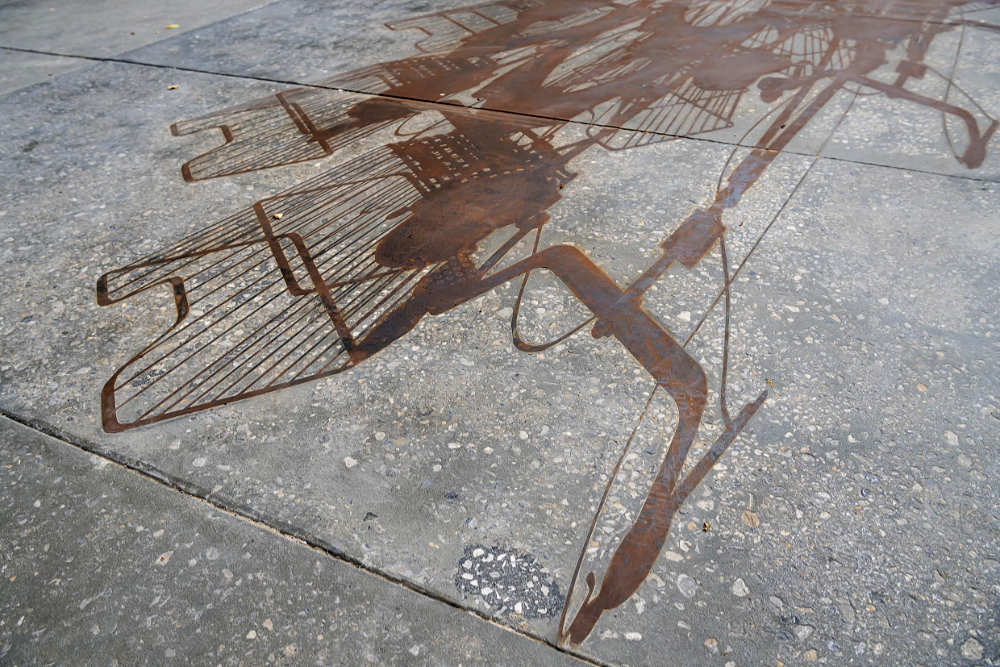 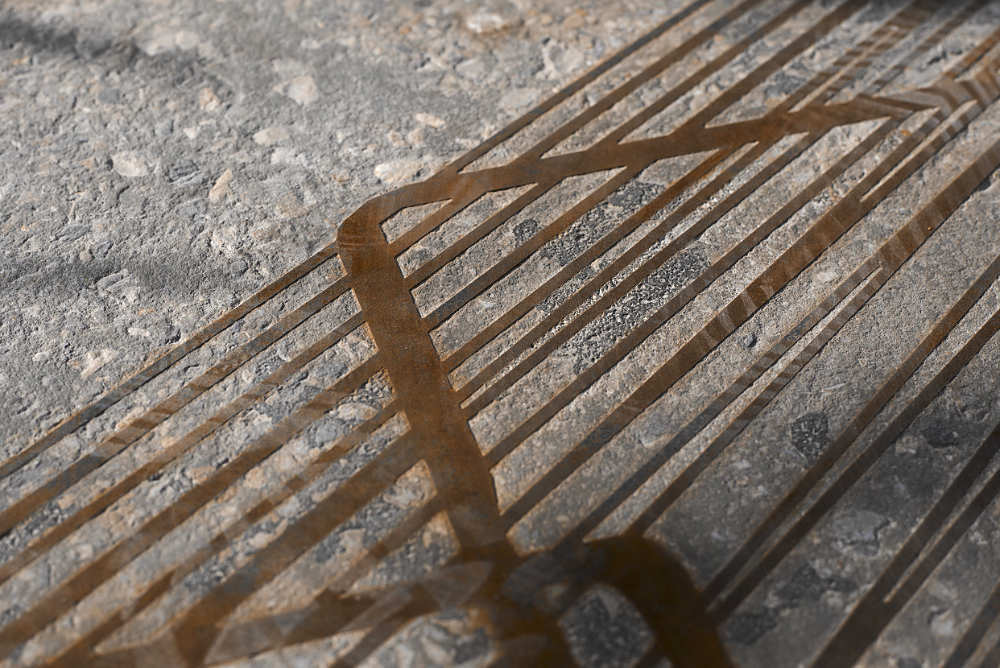 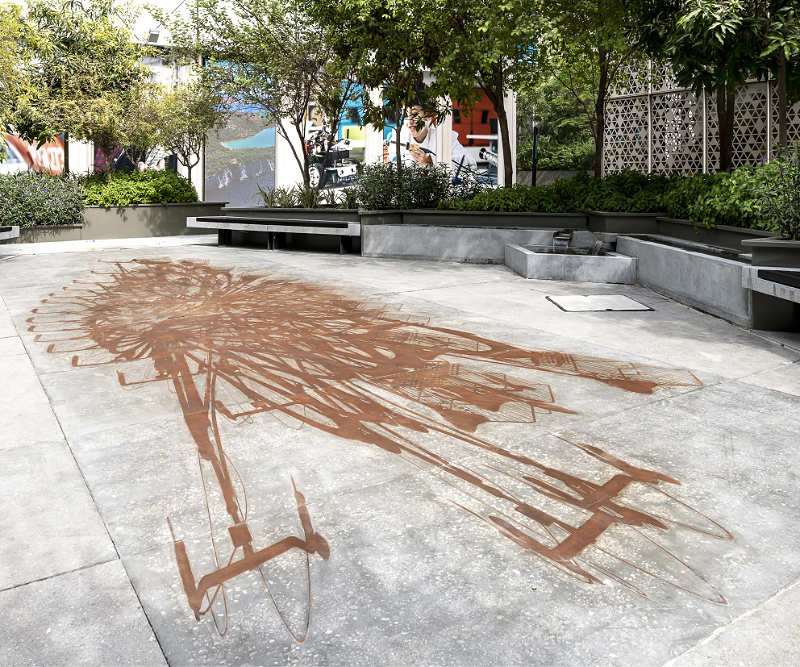 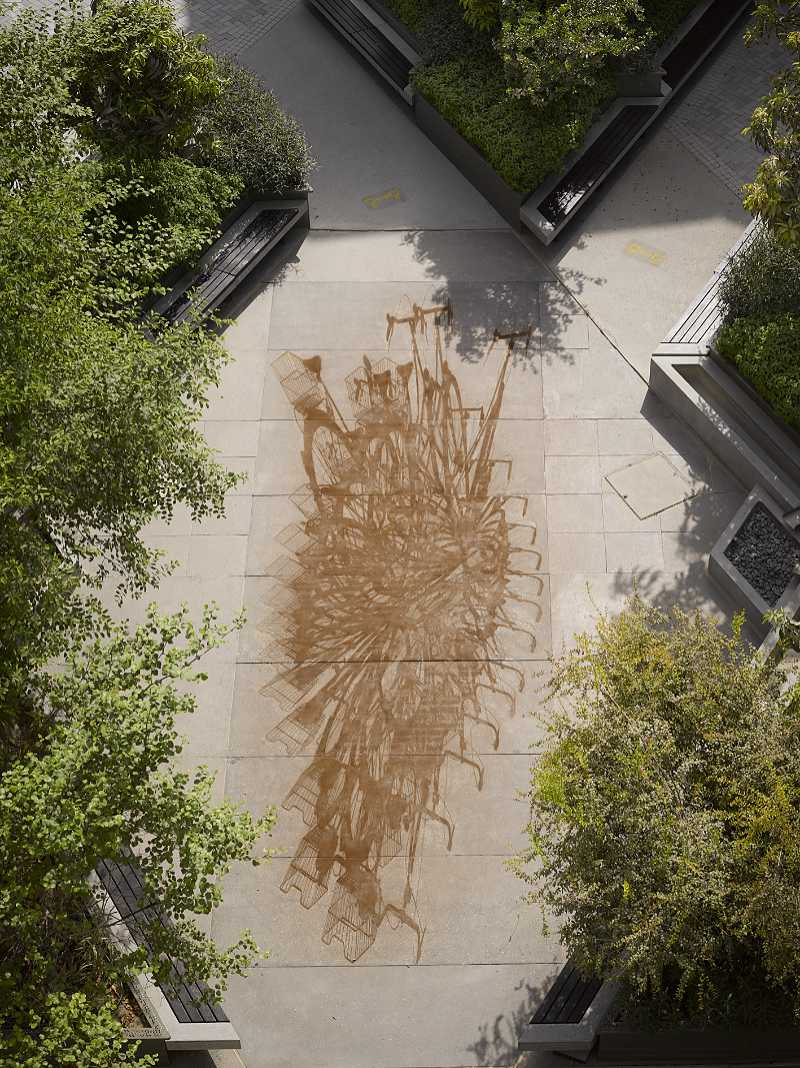 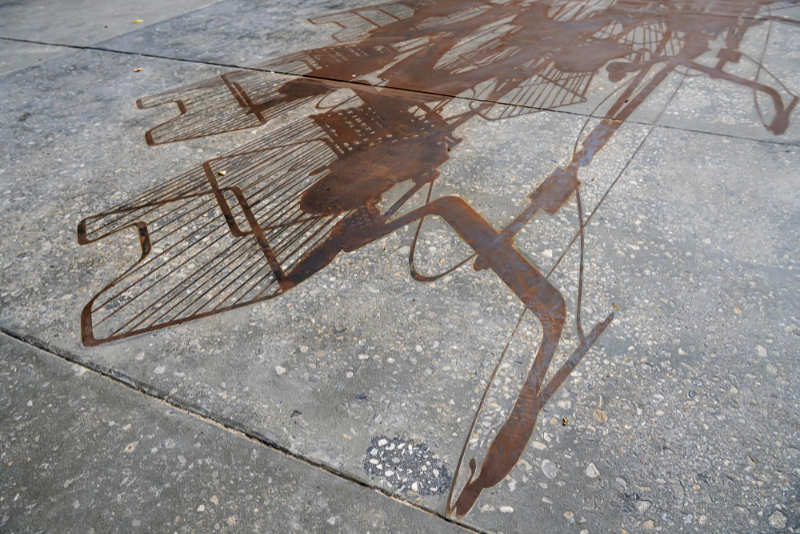 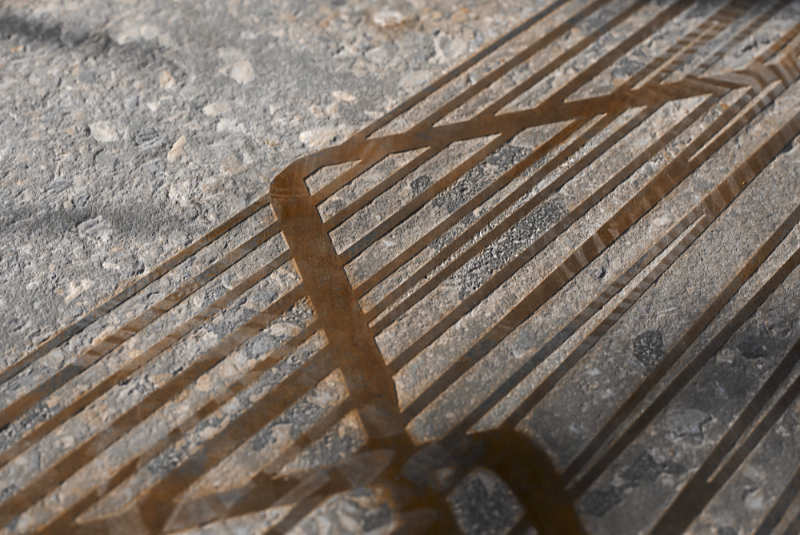 Binder & Haupt: Your work relates the astronomical phenomenon of the different orbits of the Sun and the Moon in a metaphorical way to one's own existence on Earth. It is remarkable that Ibn al-Haytham discovered this phenomenon already in the 11th century and thus paved the way to a better understanding of the two different calendar systems.
Why did you choose a bicycle which is an object normally associated with movement, rather than remaining static to project a shadow from a moving light source?

Nadia Kaabi-Linke: The bicycle stood still for 24 hours to remind us of the planetary movement and that we are all part of one, of an infinite flow. It is a fascinating symbol. While it provides mobility, it remains a stationary object if no one rides it. I was interested in this paradox of a mobility apparatus older than the automotive mobility paradigm. A bike is dependent on the operator, who turns it into a wildcard between motion and standstill. Since my work is often sensitive to places where it shows as the mobility sector of Expo 2020, I was keen to elaborate on a rather unorthodox token eager to crack some routines of understanding. As a carbon dioxide-neutral vehicle, the bike cannot function if no operator is willing to use it. It is a kind of abstract allegory reflecting our attitude towards climate change and CO2 reduction. Possibilities are at hand, but the daemon who can make a difference is us at the end of the day.

On another note, I can't make a secret that I was eager to use a lady's bike. Art history is still a Y-dominated domain. It is a matter of fact that reflects even in appropriated objects. Most bikes in art history are speed bikes designed for men, yet a female bike has more details. Looking closely at the repeating handles and springs reminds the futurists' representation of time and motion. While futurism is known for its patriarchal and heroic subtones, I was intrigued by opposing to this a permanent picture of a lady's bike. While showing nothing but the fleeting shadows, it is nevertheless composed of steel and fortified industrial concrete. In the perspective of this historical context and at this actual place, the bicycle is an odd "quote without quotation marks" in the sense of Walter Benjamin or Pier Paolo Pasolini.

B. & H.: Did your image composed by the superposed shadows originate from two different light sources? How did you generate this very complex structure on the floor?

N. K-L.: Indeed, we applied two different light sources, the Moon and the Sun. The entire setting was a chain of three celestial bodies: the Earth as the stage or screen, the Moon as a reflective shield touring around the Earth, and the Sun as a fixed center of gravity and original light source. The setting reminds the cinematographic situation. The only difference is that the light sources move according to the Ptolemy Almagest. This paradigm ruled knowledge production for 1200 years until Ibn al-Haytham noticed something odd about its core assumption. He doubted that the Sun and the Moon would orbit the Earth on the same track with half a day of delay. He did not question the central location of the Earth, but he improvised some experimental settings that anticipated the later camera obscura with a fixed light source. Ironically, in our computer simulation, we could not tell whether the scene or the light sources were moving. Computers care only about mathematics but not about reality. Hence the computer simulation was ambiguous or indifferent about a Ptolemy or Copernicus. Anyway, it allowed us to control the situation and to split a day into 23 interval images. We chose January 29, 2021, since, at this date, the Moon and the Sun met only for a few minutes in the sky over Dubai. We fed the simulation with astronomical data and generated the shadows per hour. Then we spent a lot of time composing the 23 images to recover the full details.

B. & H.: The embedding of the steel elements into the concrete floor slabs seems to be a very intricate technique, can you tell us about the production process?

N. K-L.: The production was complicated since it had to match the most robust steel and the roughest concrete in a detailed picture that expands over nine elements of more than half a ton each. I am often interested in bringing extremes as close as possible. In this case, the fine details. Some steel lines have a width of not more than one millimeter. We had to fill the small inner spaces with coarse-grained industrial concrete used for heavy-duty locations such as production halls and warehouses. My choice of materials is related to the concept or the other way around in most of my works. Steel naturally relates to bicycles, while steel and concrete are also associated with our industrial past and present. In the sense of a revolving process, time itself is represented through the different interval images as if it was frozen, sealed, and conserved in the medium of concrete. I aimed to generate the look of a modern fossil that at once expresses obsolescence and persistence. Despite reasonable optimism about a greener future, we cannot simply eliminate the fossil past. Alternatives such as e-mobility, for instance, rather mean to "change" our problem instead of resolving it. Of course, that is better than nothing, but in my opinion, it is not enough of what is possible.

Furthermore, weathering steel used for One Day On Two Orbits is a fascinating material that hooked me for years. So I am glad that I have finally found a conceptually strong application for it. Although a metal, it has its own life. It is blank and covered with a protective layer in its embryonic phase, but it reacts with a corrosive coat of bright red dust as it gets in touch with water. After a while, this red coating gets dark until it develops a robust and sustainable layer against environmental conditions in its mature state. The US Railroad is made of this steel and the older pumpjacks that by now became memorials for the golden age of the crude oil rush.

B. & H.: To which of your earlier works does "One Day on Two Orbits" have a closer connection, and in what way?

N. K-L.: The work shares a conceptual link with at least two former pieces: the large-scale Bicycle (2015) drawing representing multiple shadow phases of a stationary Dutch bike from dawn till dusk. The second work that it seems to be related to is All Along the Watchtower (2012), another simulation of a shadow. Both artworks share apparent similarities with One Day on Two Orbits, but if you would ask again, I must say, it probably has close ties to most of the works I did before.

Mathematician, astronomer, and physicist. Born c. 965 in Basra - Died c. 1040 in Cairo. Ibn al Haytham has been called "the father of modern optics", for his significant theories and foundational principles of optics and visual perception. His most famous work is the seven-volume Kitāb al-Manāẓir (Book of Optics), written 1011 – 1021.

The conceptual framework of the Public Art Programme of Expo2020 Dubai takes inspiration from the Book of Optics.
see the concept