Chika Okeke-Agulu about Who Knows Tomorrow

Interview with one of the three curators 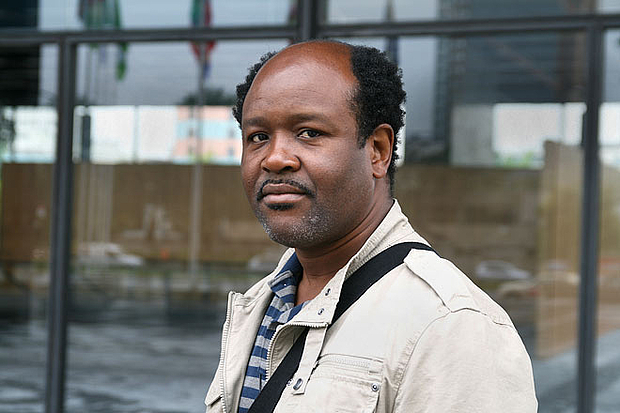 Haupt & Binder: To what extent did the historical background of the Berlin Conference of 1884/85, in which the basis for the colonial division of Africa was settled, play a role in your curatorial approach?

Chika Okeke-Agulu: This is the central question for us. In 2006, Britta Schmitz and I were asked by the German President’s office to come up with an African art project to coincide with President Köhler’s Africa Forum conference planned for 2009. He had no specific ideas on the concept of the exhibition, but since the European colonization of Africa was officially inaugurated in Berlin, under the auspices of the German Chancellor Otto von Bismarck, as history tells us, we couldn't miss the connection between the 1884-5 event and the realities of Africa President Köhler’s Forum intended to confront. There was no doubt in our minds about the very deep connection between the inception of colonization and the political and socio-cultural realities of the present.

And so Britta Schmitz and I (and later Udo Kittelmann, when he became the Director of the Nationalgalerie) started to think through this project, convinced that we had to link it to the history of colonization, because the Africa Forum’s interest in Africa's contemporary situation, which is circumscribed by political crisis, poverty, and so forth, had to do with a history of deep entanglement with Europe. So, as we conceived our project we were not interested in organizing a group exhibition about African art for German and European audiences. I think we’ve had a fair amount of that from The Short Century, which I co-organized with Okwui Enwezor (2001 - 2002), to Simon Njami’s Africa Remix (2004 - 2007), and Seven Stories About Modern Art in Africa, which I also co-organized with Clementine Deliss in 1995. So we've already had group exhibitions attempting to educate, explain and inform German and European audiences about contemporary African art. But here we wanted to make a project-specific exhibition that was not about "representing" Africa but consisted of individual artists’ meditations on the entanglement —the fraught historical and political relationships— between Europe and Africa.

So, Who Knows Tomorrow is not really about Africa. It is about Africa and Europe, and this is precisely the way we hope viewers will understand the different projects comprising this exhibition. Because what you are seeing is not so much a view of Africa as a mirror of Europe. The kind of questions the five artists are asking are as relevant to Europe as they are to Africa—national identities, globalization, multiculturalism, and all those issues that are crucial to our world today.

Haupt & Binder: With this point of departure, it is very interesting to see that the art projects are conceived in the public space, and not only specifically in the historical public space, but in the main institutions of the German art system, bringing in another layer of meaning as well.

Chika Okeke-Agulu: Yes. I think we cannot miss the link between German art and culture and the German political system, and there is no better example than the Alte Nationalgalerie, where El Anatsui's project is installed. There you have a museum that was built in anticipation of and to celebrate the modern German nation. And so you have "To the German Art 1871" carved on the pediment in gold letters. So the Prussian King who built the museum, clearly recognized the deep connection between art, culture and politics.

Consider also the Neue Nationalgalerie —where Pascale Marthine Tayou has installed his project— a structure that was built during the Cold War to present West Germany as a bastion of democracy and transparent reason, as opposed to the supposedly closed mind of Eastern Europe. So you have this glass pavilion, which is a monument to international architecture and the modernist aesthetic rhetoric of "more is less", but its original function as political propaganda cannot be ignored. And so to have Pascale Marthine Tayou install 54 flags of "African" countries, and painted "colon" sculptures, which were originally figural representations of the colonizers by African peoples, is to comment not just on the politics of supranational entities such as the African Union or European Union, or NATO, but also on Europe’s repressed colonial nostalgia.

Having said that, the argument we make is not necessarily that these artists are making political art in a very simplistic manner, but that undeniably the aesthetic power of these five projects cannot be fully appreciated without understanding the cultural, historical and political symbolisms of both the buildings and the art projects.

Haupt & Binder: What would you expect from this exhibition? We saw and documented The Short Century in the Martin Gropius Bau, and Africa Remix which was held in Düsseldorf. Do you feel that there is a change in the perception of art from Africa, or art done by artists of African descent?

Chika Okeke-Agulu: There is no question about that. If you went into the city now, you would see Wangechi Mutu's magnificent exhibition at the Deutsche Guggenheim and, previously, Julie Merethu's monumental paintings inspired by the city of Berlin was installed there. On June 12, The Walther Collection in Neu-Ulm, which includes perhaps the most important collection of modern and contemporary African photography, opened with a fabulous exhibition organized by Okwui Enwezor. These are significant developments. To have artists being presented in the most important contemporary art spaces in Europe? I mean African artists! So we cannot underestimate what has been achieved, even though a lot still needs to be done, especially in terms of museum collections. Moreover, I understand that there is a little bit of hesitance on the part of Berlin’s art journalists, for instance, to come to terms with the idea of only five African artists occupying these four great museums, when they were used to having exhibits from a "football team" of African artists, which meant that they paid very little attention to individual artists. You just looked at them as a uniform group, in the same way that you think of Africa as one country instead of 54 different and diverse countries. So this idea of presenting singular exhibitions or few artists in major exhibition projects is something that did not happen until a few years ago. There were modest achievements in the years before The Short Century; and before our magazine Nka: Journal of Contemporary African Art came on stream in 1994. Since then, scholars, critics, and curators have been "scrambling" to come to terms with the emergence of African artists on the scene. In 2004, two years after The Short Century, the ARTnews magazine had a cover that read "Contemporary African art, the newest avant-garde?"—with a question mark. So there is a substantial shift, with new academic positions opening up in universities these days for professors teaching modern and contemporary African art, which is what I do at Princeton. So there has been a tremendous development around this field, despite the challenges that still remain.

Haupt & Binder: It seems that Germans always think that colonialism is a problem of other European countries with Africa. Is this also something that can be changed? Can Germany begin to realize what their role in this issue was?

Chika Okeke-Agulu: Well, I can understand why they feel that way, after they lost the First World War and their African territories. There is an unconscious or conscious effort not to remember the past. One of the essays in the book that accompanies this project talks about the fact that in Berlin, where colonization was born, there is no monument that refers to that part of history. So I don’t want to believe that this is just a memory lapse, knowing the ability of the Germans to really document history, to remember their history, well until 1945, that is. So I believe there’s a kind of amnesia about the role of Germany in African colonization. Of course they lost their territories, but the fact that the foundational moment of European colonization happened in Berlin cannot be treated as insignificant. I think this question came out a little bit in some of the responses to The Short Century; in fact, one critic said something to the effect that the role of Germany in African colonization was not well represented in that exhibition. Of course he missed the point that the exhibition focused on African independence and liberation, rather than on its colonization. But the point here though is that you have a feeling that the people are maybe increasingly sensitive to this fact or to this part of history. And so, since the Bundespräsident is involved in this project, one hopes that there will be more attention directed to this history, which at present is not properly remembered or debated.

As painful as history might be, it is worth remembering, if only for the reason that the consequences are here with us, in the guise of the so-called Afro-Germans, because it was partly the colonial past that brought them here. Apart from black Americans who came to Germany during the World Wars, a lot of Africans migrated here from former German colonies and have come to think of this country as their own, even though the system does not necessarily appreciate that. And this is what I mean, that the consequences of colonization and post-colonization are here with us in Africa and in Europe. If European countries and nations are asking themselves "who are we?," it is because of the increasingly influential presence of immigrants (and their descendants) from former colonies. So we find that while Europe struggles to find its own soul, it hasn't come to terms with the history of its entanglement with its "Other".

Born in 1966. Artist, independent curator and art historian with primary interest in contemporary art, but especially of Africa and its Diaspora.

Assistant Professor of Art History in the Department of Art and Archaeology and at the Center for African American Studies, Princeton University, USA.

He has co-curated several exhibitions, including Seven Stories About Modern Art in Africa (1995), The Short Century (2001) and Who Knows Tomorrow (2010).

© Copyright:
All contents on this website are protected by copyright.