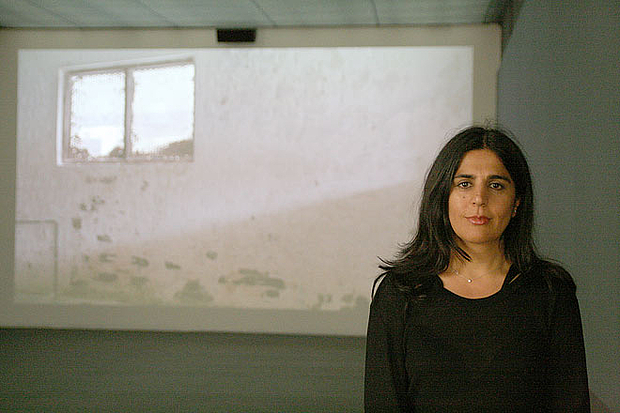 Bhimji trained in London at Goldsmiths College (1983–86) and The Slade School of Fine Art (1987–89). Of Asian ancestry, she moved with her family to England as a child, following the expulsion of Asian-Ugandans by the Idi Amin regime in the early 1970s. She was an active participant in the black British art moment of the 1980s.

A photographer and filmmaker, Bhimji uses poetic bodily and architectural imagery, as well as the landscape, to explore history, memory and the psycho-geography, especially of postcolonial Africa and Europe. Her architectural spaces often evince feelings of desolation and pathos, even as they also reveal suppressed histories of violence inscribed on walls, floors, or in the abandoned furniture coated with grime and dust, or in smashed, cob-webbed windows. The power of Bhimji's work lies in its stunning, intensely seductive pictoriality, seamlessly combined with the tragic, melancholic sadness of troubled histories. While the human body was present in the form of unsentimental, lifeless objects in her Collection of Charing Cross Hospital (1995), it is often hauntingly absent in the bare rooms, dilapidated houses, run-down tenements and abandoned factories in Love (1998–2006), Waiting (2007) and other works. Her masterpiece, the powerful Out of Blue (2002), commissioned for Documenta 11, is a poetic meditation on the human condition through the contemplation of serene landscapes and interior spaces bearing marks of past violence, and thus simultaneously evokes the sublime as well as the horrific violence emblematized no less by the genocides in Kosovo and Rwanda in the 1990s.

A fierce advocate of the poetic image, Bhimji nevertheless insistently imposes on her pictures and films an ineluctable sense of tragic wonder, with the result that they become not just works of art, but also archives of modernity's dark moments, and humanity's incomplete, perhaps even impossible, visions of socio-political progress.

Who Knows Tomorrow
A project by the National Gallery Berlin
4 June - 26 Sept. 2010