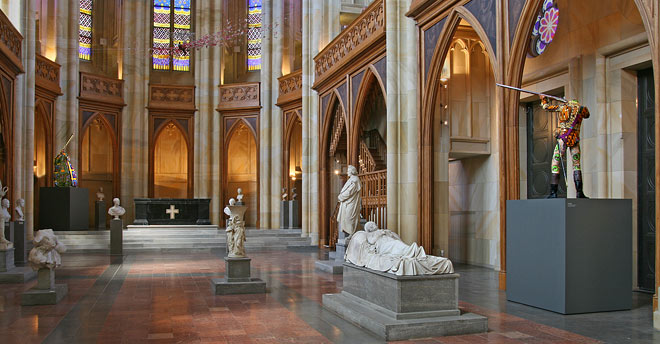 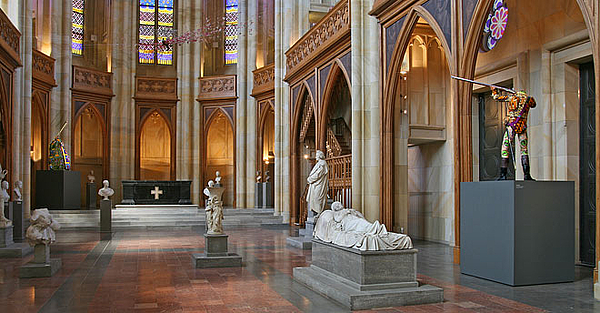 The male figure on the right and the female figure in the background, on the left, shooting on the pheasant, hanging in the middle of the building.

2 fibre glass figures, 2 rifles, 2 plinths, different material, Dutch wax-prints (cotton)
Each figure on plinth: 389 x 192 x 152 cm
Comissioned by The National Gallery (London). The Gordon Schachat collection (South Africa), Courtesy of the artist, Stephen Friedman Gallery (London), and James Cohan Gallery (New York).
The simultaneous invocation of pleasure and violence is most evident in this sculpture installation, depicting a Victorian couple hunting pheasant. Created after a portrait by the 18th-century British Academician, Sir Joshua Reynolds, the piece shows headless Colonel Tarleton, an avid advocate of slavery, and Mrs Oswald, whose husband Richard Oswald amassed great wealth from slave plantations. Although an elite sport, Shonibare turns the scene into a sight of decadent savagery, and a metaphor of the violence of slavery and colonization. The drama of this scene is heightened by its setting: in the Friedrichswerdersche Kirche, among a gallery of marble sculptures that symbolize Prussian cultural accomplishment and its enlightened ethos. It inevitably calls to attention the complex nexus of slavery, colonialism and German history.

(From the press information)