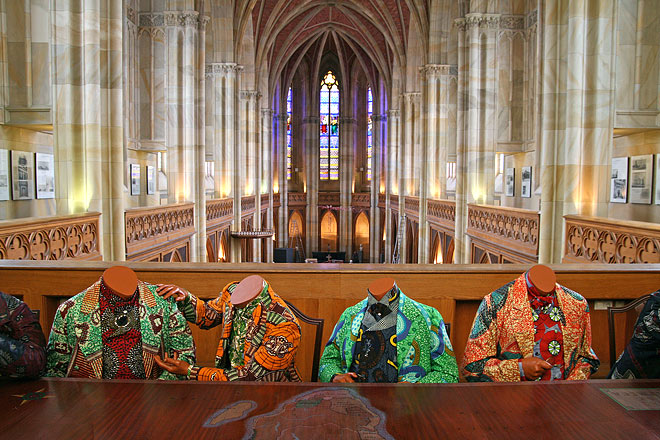 Yinka Shonibare MBE is the first-ever contemporary artist to exhibit his work in the Friedrichswerdersche Kirche. Both, the building of the church, built 1824 - 1831 by Karl Friedrich Schinkel, as well as the collection of 19th-century sculpture of the Berlin School which is exhibited there, epitomize the idea of an enlightened, virtuous Prussia. Shonibare confronts this with quite a different aspect of Berlin history: the historical fact of the violent expropriation of the African continent's resources and culture, which Prussia supported in the 19th century, as evidenced during the Berlin Congo-Conference of 1884. Through a series of ironic references, his works expose the hypocrisy of the former colonial powers.

The Scramble for Africa, 2003
This installation dramatically re-imagines the Berlin-Congo conference of 1884/5, organized by the then German Chancellor, Otto von Bismarck, to formalize European colonial claims on African territories. The theatrical, discordant gestures of the artist's signature headless figures insinuate the political intrigues and chicanery responsible for the chaotic intra-European squabble Bismarck sought to settle with the conference.
As usual in the work of Yinka Shonibare MBE, the headless figures are dressed in Victorian clothes of so-called "African" textiles. These fabrics are similar to Indonesian wax-print textiles, and used to be industrially produced in Holland for the African market. Now they mainly come from India and China.

Colonel Tarleton and Mrs Oswald Shooting, 2007
The simultaneous invocation of pleasure and violence is most evident in this sculpture installation, depicting a Victorian couple hunting pheasant. Created after a portrait by the 18th-century British Academician, Sir Joshua Reynolds, the piece shows headless Colonel Tarleton, an avid advocate of slavery, and Mrs Oswald, whose husband Richard Oswald amassed great wealth from slave plantations.

(From texts by the organizer)