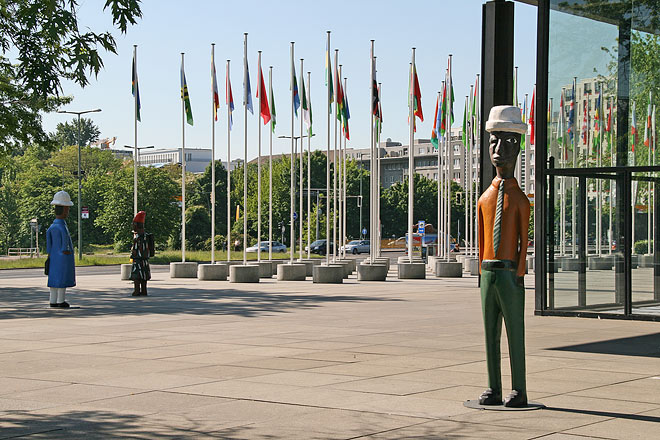 Tayou welcomes visitors to the Neue Nationalgalerie’s terrace by an installation of flying flags of the African Union and with the colors green, yellow, and red, which are encountered in changing configurations all over the African continent. For one entire summer, they dominate the icon of modern architecture in Berlin and thereby represent Africa in its official diversity and dimensions. A crucial part of this installation is made up of six polychrome sculptures inspired by African "colon" sculptures — figural portraits made by African artists representing Europeans during the colonial period. Tayou thus meditates on the complex ways Europeans figured, often as the inscrutable other, in the African ritual, visual and social imaginary.

With his contribution to Who Knows Tomorrow, Tayou deconstructs historic self-affirmations that predominantly reveal national orientations. His work for Berlin titled Colonial Erection (2010) brings to light the processes of social change and leads beyond what exists. It also expresses a critical commentary on the historical, cultural and political imperatives that result in the creation of supranational states in the wake of the establishment of the European Union and the ensuing debate about European identity and citizenship.

The Neue Nationalgalerie by Mies van der Rohe is an icon of modern architecture. It opened in 1968 and reflected the transparency and spaciousness of the former Federal Republic’s self-understanding.