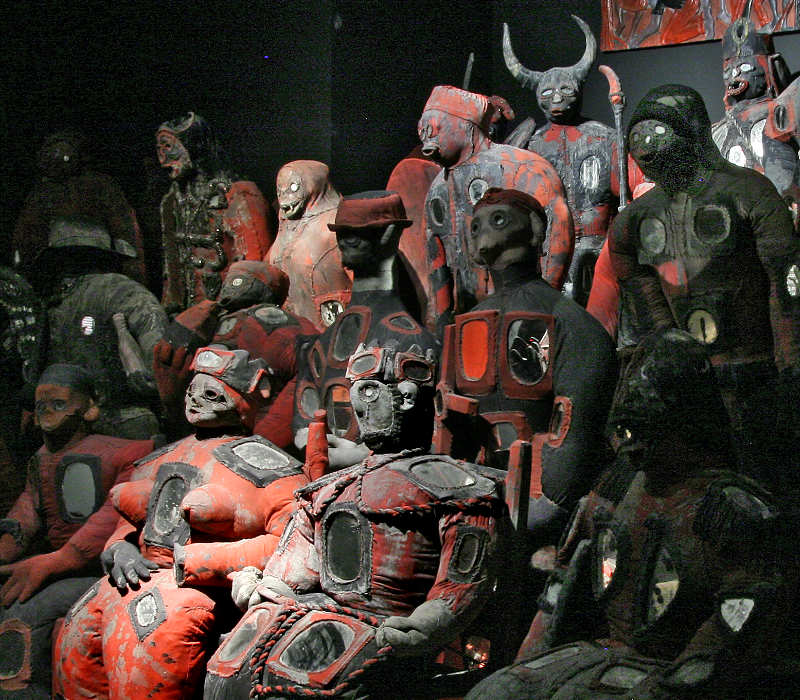 Vodou. Art and Cult from Haiti

This web presentation of hightlights from the Marianne Lehmann Collection provides insights into the world of Vodou, including lots of photos and information from a travelling exhibition. The show featured more than 350 ritual objects, with a focus on the Bizango, a vodou secret society whose objects were only to be seen by initiated members. Representations of spirits, sumptuous altars, sequinned flags, vessels and huge mirrors were also on display.

- History of Haiti and Vodou

With lots of information about Vodou and the exhibits 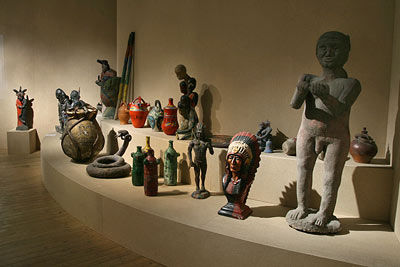 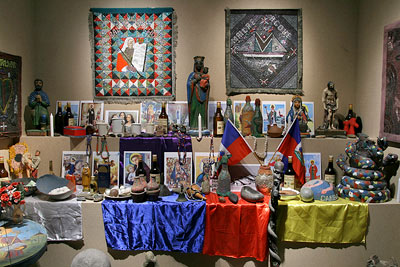 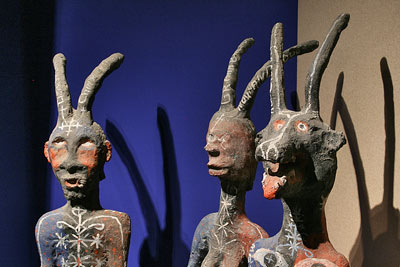 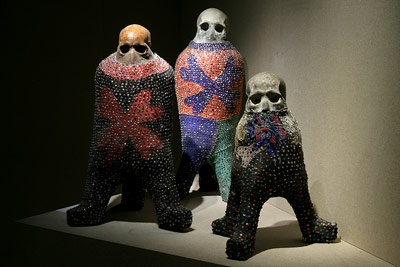 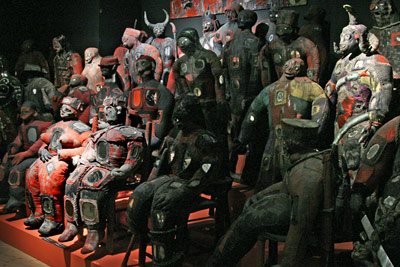 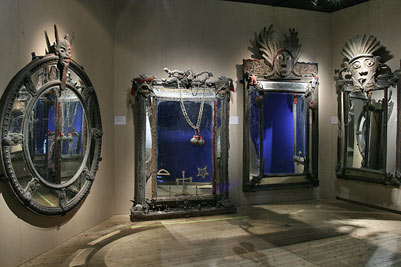 A native of Switzerland, Marianne Lehmann has lived in Haiti since 1957 and began to collect objects from vodou temples about 30 years ago. Her collection - which comprises about 3,000 items - focuses in particular on the Bizango, a vodou secret society. In order to manage the collection, a foundation was established: the Fondation pour la preservation, la valorisation et la production d'oeuvres culturelles haïtiennes (FPVPOCH), which chose the objects for the travelling exhibition in cooperation with the Musée d'ethnographie de Genève (MEG). The exhibition was on display in Geneva, Amsterdam, Gothenburg, Berlin, Stockholm, Bremen, Quebec, among other places.

There are plans to build a museum for the Lehmann collection in Haiti. The presentation of the exhibition aimed at making the collection internationally known and at furthering its recognition as part of Haiti's cultural heritage. The exhibition thus had two objectives: to challenge the negative stereotype associated with vodou, and to win support for the projected museum.

The Haitian manner of spelling 'vodou' was intentionally chosen for this exhibition. The expression 'vodou' is understood as those religious practices, which are widespread in West Africa and were brought to America by African slaves. These practices form the basis of Afro-American religions, which were influenced by elements of Catholicism and indigenous beliefs.They include Candomblé in Brazil, the María-Lionza religion in Venezuela, Santería on Cuba, voodoo in the United States, and vodou on Haiti.

The word 'vodou' derives from the Fon language in Benin and Nigeria and is equivalent to 'god', 'spirit' or 'sacred object'.

Some 80% of the ca. 8.5 million inhabitants of Haiti are members of the Catholic Church, while at the same time up to 90% believe in vodou gods and spirits, who are called loa (Creole: lwa). There are diverse forms of vodou in the different regions of Haiti, as its followers place importance upon very different elements, which are moreover constantly augmented by new features. Vodou is omnipresent in everyday life, in music and dance, in rituals and symbols.

Many of the lwa figures and Vodou objects on display in the exhibition bear Creole designations. Creole (kréyol) is the official language of the Haiti, next to French, which however is spoken by only 5–10 % of the population. Kréyol bases on French word roots; it was influenced grammatically and phonetically by various West African languages.

At the very core of vodou is the belief in lwa, spirits who exert an influence upon all spheres of everyday life and upon the fate of people. Through the lwa, humans can gain contact with God. The lwa pantheon includes African gods and Catholic saints; they exist side by side with spirits whose history reaches back to the original Native American inhabitants of Haiti, the Taino.

The lwa are usually worshipped in a vodou temple, theounfò, which is headed by a priest (houngan) or priestess (mambo). Houngan and mambo preside over the rituals and initiate the vodou practitioners.

The rituals are held in a large room, the péristyle. The spirits "enter" the temple by descending on a pole, thepoteau mitan, which is located in the centre of the péristyle. The spirits take possession of some participants, whom they have chosen beforehand. The person possessed "serves the lwa", who has thus entered his or her body. In vodou there is no separation between body and soul. Rhythm, music, song, and dance are important elements of the rituals.

Located in the adjacent building is the altar room with the attributes of the lwa. The altars are laden with a multitude of sacred objects, such as containers of the most varied types as well as offerings of food and drink. Making offerings is an important component of serving the lwa.

The Worship of Gods and Spirits

The lwa are divided into "nations", or nanchons, which relate to the various regions from which slaves originated. The two most important lwa nations are the Rada and Petwo. The Rada cult comes from the Yoruba culture of Dahomey (present-day Benin), while the Petwo cult has its roots in the Bantu cultures of the Congo Basin and Angola. Rada lwa are characterized as being calm, cool-headed, and benevolent, while Petwo lwa are considered to be quick, hot-tempered, and the actors in magic rites.

There are countless lwa, found in diverse regions and temples. Besides the lwa, other beings are worshipped as well: the divine twins (Marasa), the deceased, and the family gods. There is no cult or worship devoted to God (Le Bon Dieu) – He is regarded as beyond approach.

The lwa are represented by symbolic objects, such as the sabre that symbolizes the lwa Ogu. Vévé – individual graphic signs – are sprinkled on the floor of the temple during rituals with flour and ashes or are applied to sacred objects. Images of Catholic saints are associated with specific lwa.

Just like human beings, the lwa have typical characteristics: a favourite colour or favourite food, a preference for certain sacrificial animals or offerings.Their abodes are in certain places in nature, such as trees. Vodou practitioners are taught the characteristics of the lwa and control over spirit possession during initiation. Only then may they take an active part in the rituals and in the vodou community. People who are possessed will imitate and ritually enact the characteristics of the respective lwa: an individual possessed by the god Damballah, who is symbolized by a serpent, will crawl on the floor with wriggling movements, and is fed raw eggs.

Besides the societies associated with customary vodou temples, there are also secret societies in Haiti. With their rigid structure and military organization, these societies were perfectly suited to the maroon communities: small groups of fugitive slaves from the plantations. From 1791 to 1804, the secret societies played a key role in the slaves' resistance against the French. The struggle was fought with both tangible and magic weapons, as the priests of the societies invoked the most aggressive, hottest powers. In the 20th century, the dictators François "Papa Doc" and Jean-Claude "Baby Doc" Duvalier used secret societies to silence critics of their regime. These societies, of which the Bizango is one of the most important, still exist today.

Zombies rising from their graves, dolls pierced by pins – vodou (or voodoo) is associated with stereotypes that have hardly anything to do with the actual practices related to this type of religious worship. Such fantasies also include cannibalism or secret rites performed by black people obsessed with blood and sex. This image of vodou has long been adopted and perpetuated by various media, particularly in literature and movies. But where do these stereotypes about vodou come from?

While dolls do indeed play a role in vodou, the use of pins is unknown. Perhaps this idea has been inspired by the power figures (nkisi) found in the Kongo, which are studded with nails. In the context of vodou practices, dolls serve as surrogate human beings, used for the solution of problems or the fulfilment of wishes. In addition, they act as bearers of messages that are exchanged between the living and the dead.

Portrayals of zombies range from servile undead to cannibalistic monsters. Many Haitians believe that zombies are living dead, who are bereft of any memory and consciousness, and who were raised from the grave by practitioners of black magic with the intention of exploiting them. To create a zombie, one of the two souls of the deceased – the ti bon anj, which stands for the willpower of human beings – is captured. The magician thus gains complete control over that individual. The other soul, the gwo bon anj, which stands for consciousness, remains in the body. Vodou practitioners view the transformation into a zombie as the worst punishment that secret societies can impose.

History of Haiti and Vodou ►

From texts related to the exhibition in Berlin.
© Photos: Haupt & Binder, Universes in Universe