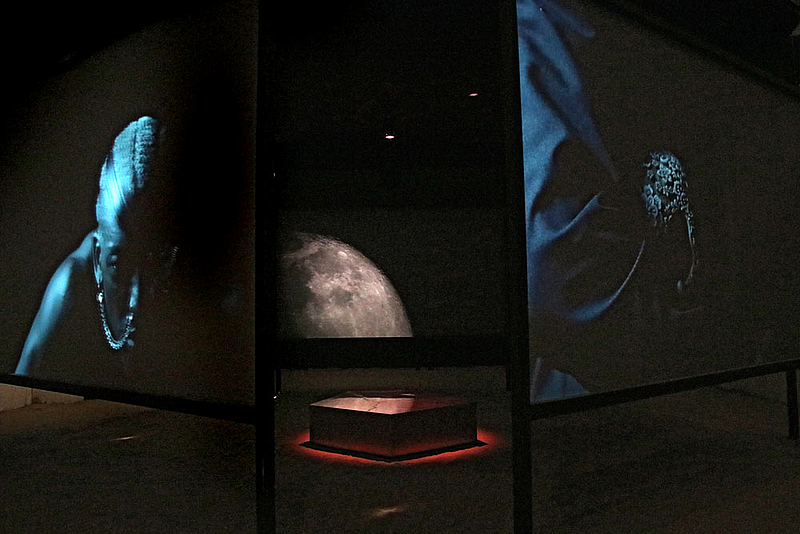 Caecilia Tripp's work is rooted in collaborative practice and the development of dialogic imagination as a form of celebration of togetherness and shared futures. She has worked closely with Edouard Glissant, most notably on her film Making History (2008), which was inspired by the novel Making of Americans (1925) by Gertrude Stein. Tripp approaches the medium of film as a ritual of fugitivity and migration, one that cuts through colonised spheres and spaces of certainty, and in the artist's words, 'falls between light and darkness, in the collective act of being visible and invisible'.

Tripp's SB14 commission, Even the Stars Look Lonesome (2019), engages 'worldliness as magnetic connection' in a film and sculpture installation created in dialogue with a number of collaborators. In Kalba Ice Factory, the artist presents a five-channel film installation in the shape of a pentagon, with openings for visitors to enter at each corner. This shape is echoed by a copper sculpture titled ASTEROID (2019), placed at the centre of the screens. The film draws from several texts, including works by Za'Kisha and Borelson BLM Toronto in collaboration with cosmologist Renee Hlozek (South Africa / Dunlap Institute, Toronto) and the writings and research of Cheikh Anta Diop, the Senegalese decolonial historian and scientist. A sonic score of polyphonic chanting, composed by Robert Aiki Aubrey Lowe, accompanies performances by choreographer David Hamilton Thompson and former World Boxing Organisation champion Michael Olajide Jr to create a somatic experience that enacts and explores a collective space of utterance that goes beyond the imperatives of control or mastery and instead thrives in spaces of unpredictability and opacity. Tripp describes this process as 'an asteroid crashing into an ice factory, crystallising fluidity into a fixed form'.

Kalba Ice Factory: Six participants. Look for Me All Around You, curated by Claire Tancons. 7 March - 10 June 2019, UAE.