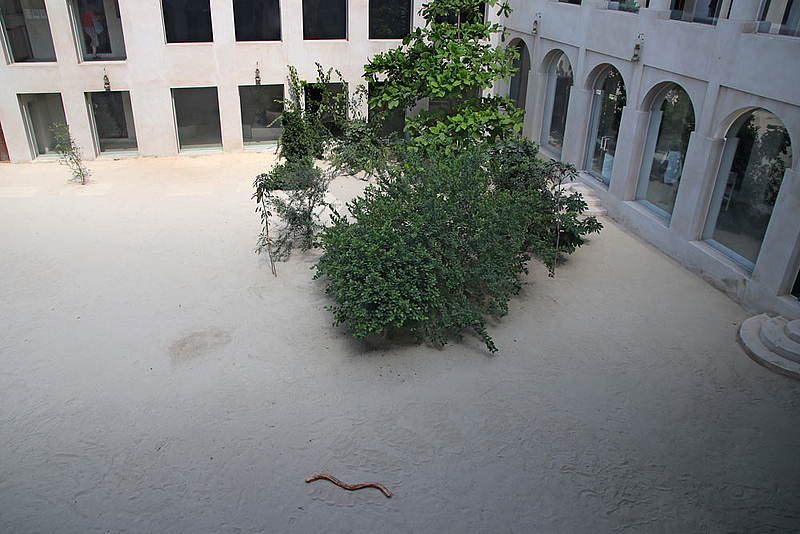 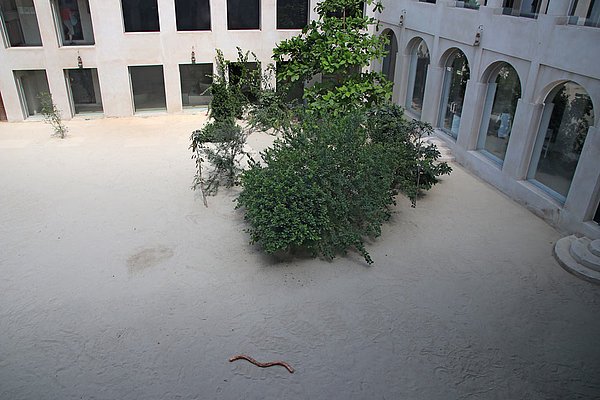 Pamela Rosenkranz often works with materials developed in the high-tech, scientific and pharmaceutical industries, examining how achievements in modern science and medicine transform an understanding of humanity and alter the relationship between nature and culture.

For her immersive SB14 installation, Rosenkranz has developed a work that combines the most recent advancements in biorobotics with the far-reaching symbolic power of the snake. Healer (2019) is an algorithmic snake that lives, breathes, sleeps and dreams in the sun-drenched courtyard of Sharjah's Bait Al Serkal. The work is informed by the artist's research into recent advancements in biorobotics, and in particular, snakebots, which are used to perform complex tasks that augment human capabilities—from surgical procedures to search and rescue missions, scientific research in contaminated areas, and deep-water missions such as the maintenance of oil-drilling platforms. Healer embodies the 'supernatural' qualities of the snakebot while also resembling a 'natural' snake's appearance and behaviour, thereby connecting to the far-reaching symbolism about the creature that runs throughout human civilisation. For example, the snake's venom, once understood as an ominous sign, can be interpreted as a tenacity to survive in the face of catastrophic events to come. The world's first writings from the Fertile Crescent also tell of deep-rooted connections between humanity and the snake, which symbolised the origin of the world in Babylon and the beginning and the end of time in ancient Egypt. Spanning the history of human existence and connecting the present world with the past, the snake is a harbinger, divine representative and technical tool from which to learn in these times of rapid technological advancement.