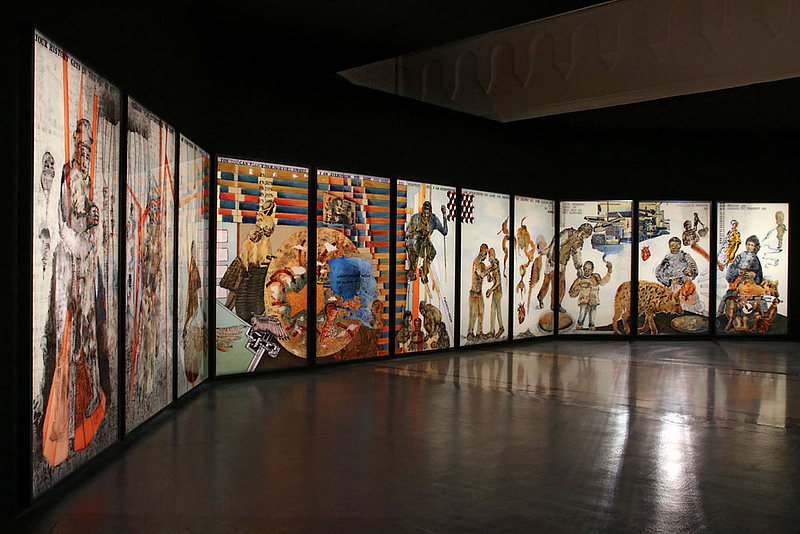 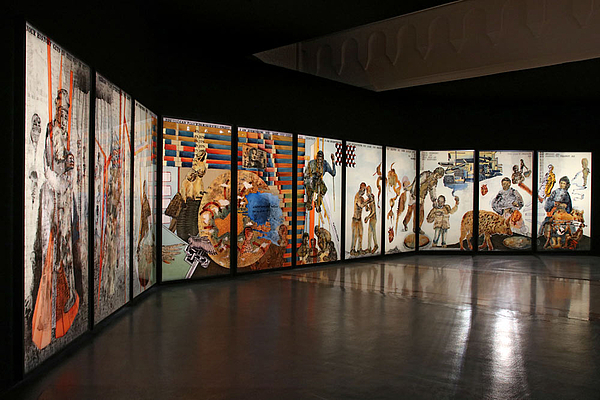 Nalini Malani's five-decade-long practice encompasses theatre, ephemeral wall drawing, painting and performance as well as projected video and shadow plays. Her work considers the persistence of human touch and heart, memorialisation and courage, which endure in spite of the destructive pathologies of militarisation and violence used to secure ethnic, sectarian and colonial supremacy.

Expanding on concerns explored in the artist's previous multi-panel works Splitting the Other (2007) and Twice Upon a Time (2014), Malani's SB14 work, All We Imagine as Light (2017), is an 11-panel reverse painting that explores the pain of parting and the human affinity and affection holding people together even after political ruptures lead to geographic divisions. As part of a series of works with the same title, this work looks to Kashmiri poet Agha Shahid Ali, whose poetry combines Hindu, Muslim and Western heritage to convey a confluence of death, loss and memory.

The work's nonlinear narrative can unfold from any number of figures, who populate the painting and connect to each other in its dream-like space. A central tableau depicts three children looking into a hole in the earth that recalls Kashmir's damaged landscape. Colourful elements that resemble graphs, tables or charts surround the children, portraying humankind's subjection as statistical markings or the grid of a surveyor. The plight of Kashmir today, a region historically part of the Mughal and Derrani (Afghan) Empires, follows from the collapse of British-occupied India in 1947, when this land was claimed by India, Pakistan and China. Seeking sovereignty for its people, this land in limbo is one of the most militarised regions of the world. In the words of poet Agha Shahid Ali, 'I am everything you lost. My memory keeps getting in the way of your history.'