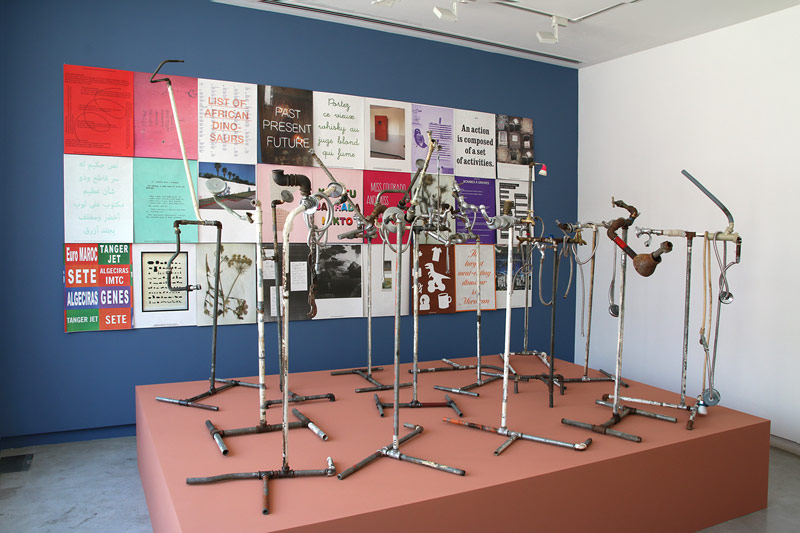 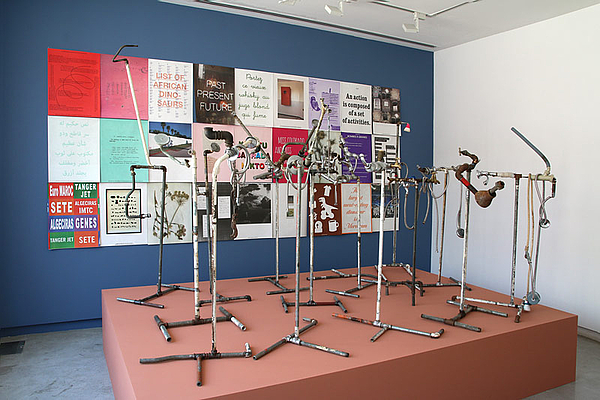 Yto Barrada’s work on her hometown, Tangier, explores the political imbalances, existential desires and peripheral stories that shape the everyday life of the inhabitants of Morocco’s northernmost city. Her work attempts to problematise the commonly held narratives of the extreme that represent Tangier: an exotic stop on the tourists’ itinerary of Morocco, an existential waiting room for its permanent population and a port city 13 kilometres from Europe that serves as the jumping-off point for the hopes of migrants. Barrada contemplates Tangier’s sense of place and affect from the spaces and experiences that are overlooked by the outsiders’ vision of the city.

In Syrinx (Plumber Assemblage), Barrada explores the palpable culture of public sociality and entrepreneurial spirit of Tangier’s thoroughfares. This series of sculptures take inspiration from the city’s plumbers, who advertise their services in public squares with structures made from discarded pipes, faucets and spigots collected on previous jobs. The artist ascribes to these ‘ready-made’ and reimagined sculptures a totemic status that borrows from the Syrinx and the mythology of metamorphoses. Moreover, these public showcases of skill and experience align with Barrada’s longstanding interest in strategies of survival and resistance, as developed in film works such as The Smuggler (2006) and The Magician (2003). For the artist, these vernacular forms of making and being betray an intimate and embodied knowledge of the city’s inner life. Alongside Syrinx, Barrada presents works from the last cycle of posters from her ‘Faux Guide’ series, based in research on the economies surrounding Moroccan fossils.
(From the SB13 Guidebook)