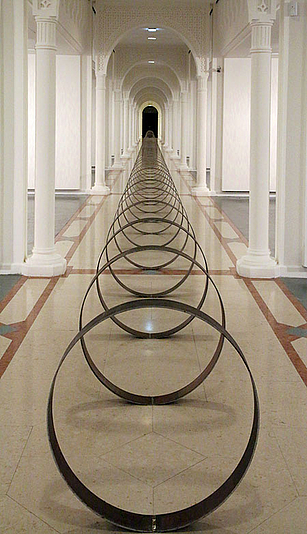 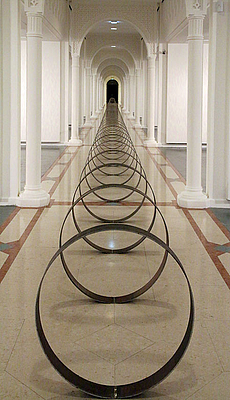 A line is a construction of distance in space, time and vision. It gives a strong definition to form and position through connection and separation. The Trans-Arabian Pipe Line Company (TAPLine) was established in 1946 to build and operate a 1,213-kilometre-long, seventy-eight centimetre-wide pipeline to transport oil by land from Saudi Arabia to Lebanon through Jordan and Syria, and after 1967, through the Golan Heights. With this endeavour, the company conjoined three intersecting lines in an arc of history, geography and geometry. Due to the sociopolitical and geographic transformation of the region in 1983, the company was dissolved and the pipeline abandoned, its infrastructure left hidden on the land. Today it is the only physical object that crosses the borders of five countries in a region very conscious of its demarcated boundaries.

Steel Rings (2013– ), from the series The Shortest Distance Between Two Points (2007– ), is a sculpture that replicates this hidden history in ten-centimetre sections manufactured to the same diameter and thickness of the original pipeline, each engraved with the distance from the pipe's source and its corresponding geographic coordinates. Consuming an entire wing of the Sharjah Art Museum, this installation of Steel Rings represents the first sixty kilometres of the TAPLine from its origin in Saudi Arabia.

See also his work at
>> SAF Art Spaces, building I

Works by 11 artists, presented on two floors of the museum, including some of the most important representatives of the modern and contemporary art in the Middle East.