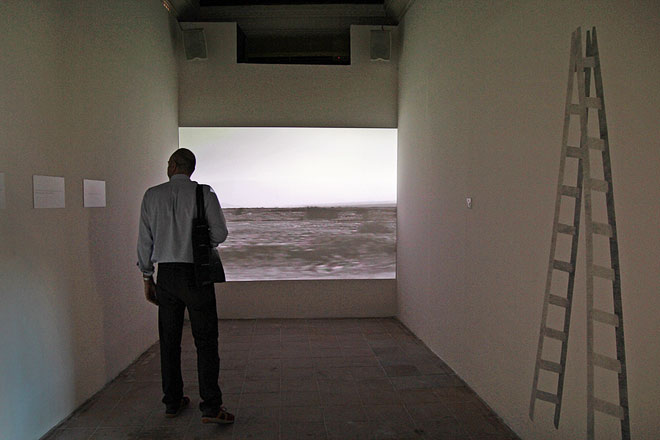 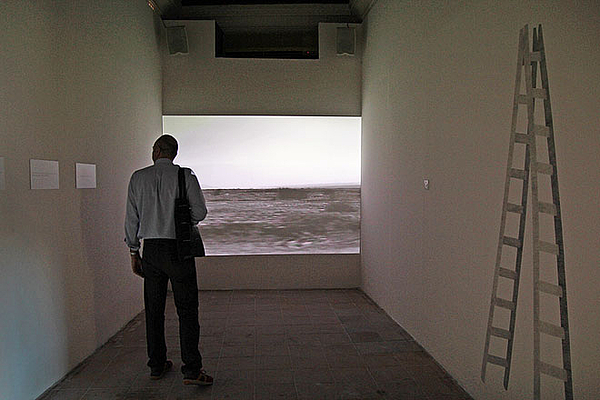 Línea de Nazca (Nazca Line). 2008
Black-and-white video projection with sound (2 min 40 sec), graphite wall drawing and printed texts
In video, photography, drawing, sound, action and text, Luz María Bedoya reveals the fissures between the real and its representations, seeking what is usually perfected or edited out. In Línea de Nazca, a video records a car racing across the Pan-American Highway in the southern Peruvian desert, the location of the Nazca Lines, ancient geoglyphs dating from 300 BC – 900 AD. The video is accompanied by a graphite wall drawing of a stepladder, which echoes the activities of Maria Reiche, a German woman who studied the Nazca Lines in the middle of the last century.

The installation is completed by five framed captions from the oldest book about the Nazca Lines, reprinted without the corresponding images; these texts refer to the altitude necessary to understand the drawings. Línea de Nazca is an attempt to move away from the flat postcard version of this site toward a three-dimensional landscape that cancels visibility but offers materiality.