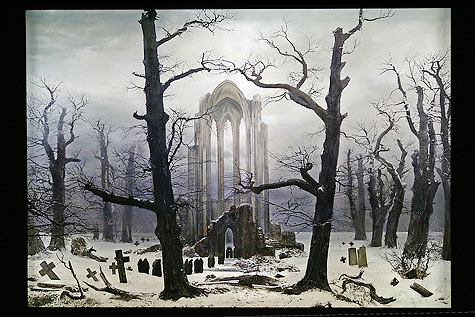 Caspar David Friedrich, Klosterfriedhof im Schnee, 1817-19, 2009
Digital composite image from 400 photos
Location: Greifswald, Germany / Düsseldorf, Germany
LED Lightbox
121 x 170 cm
From the series "The lost works of Caspar David Friedrich", dedicated to the four works by the painter that were lost during the two World Wars. Masuyama located landscapes similar to the ones painted in the beginning of the 19th century, and took several hundred photos of each site. He then merged them together using digital image editing programmes until the composite image resembled the original panting in every detail.