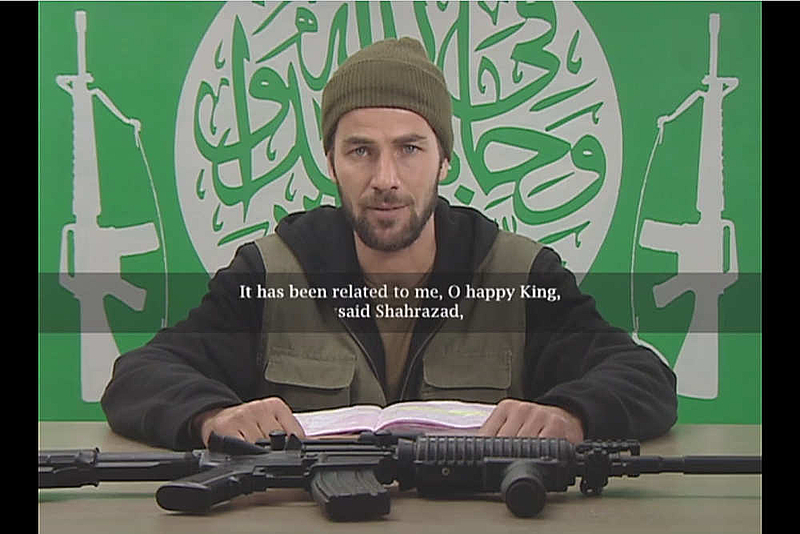 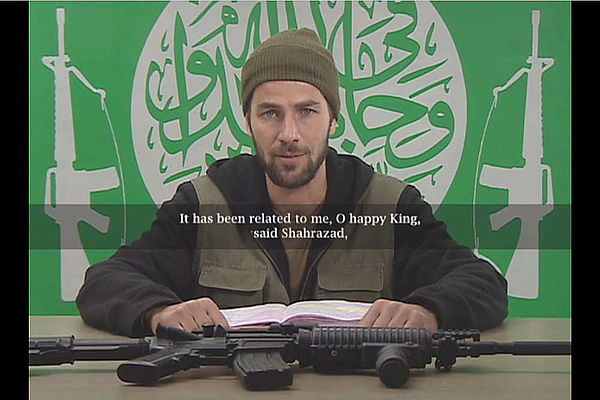 To Be Continued... 2009
Video installation, 41:30 min
Commissioned and produced by Sharjah Art Foundation

The living martyr video documents a man or a woman announcing the will and determination to carry out a suicide operation among his or her enemies. He or she poses to be filmed for the last time alive, with the knowledge that his image will be distributed widely after the carrying out of the operation. The living martyr encounters in the camera pending mortality as human and potential immortality as image.

To be continued… references these videos. We see a man donning the familiar accessories and against the conventional backdrop—without any clear political affiliation. He reads what was supposed to be the text that testifies to his approaching obliteration but emerges instead as tales from A Thousand and One Nights. In these globally known tales Shahrazade saves her tribe of women from certain execution by narrating one gripping tale after another to King Shahrayar.

To be continued… explores temporality, narration, and death. Through an unending process of reading and narration, the 'living martyr' delays that horrifying moment of sacrifice, the killing of self, and the killing of others. The process of reading becomes interminable, as the video continues without a conclusive end. Poetry, imagination, and text function to eternally delay the seemingly inevitable occurrence of death and mortality. The 'living martyr’s' existence in a permanently suspended state becomes a site to ponder the very thin line between the immediate and the interminable, the inevitable and the eternally deferred.

Excerpt from Provisions for the Future, the catalogue of Sharjah Biennial 9.

Part 3 of the photo tour through Sharjah Biennial 9, 19 March - 16 May 2009. Exhibition 'Provisions for the Future', Curator: Isabel Carlos, 58 participants.