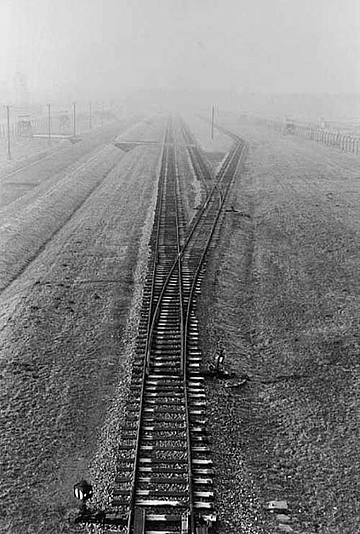 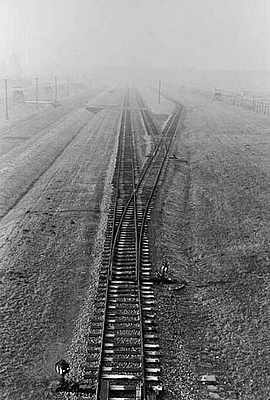 "I don't think I exaggerate when I say The Holocaust and Apartheid are the two most memorable evils which hypnotized the world, this century ", stated Santu Mofokeng. The railway track in the center of his photograph led the deportation trains directly to the Auschwitz-Birkenau extermination camp.

Statement by the artist

I don't think I exaggerate when I say The Holocaust and Apartheid are the two most memorable evils which hypnotized the world, this century. To compare apartheid with the holocaust is very tempting albeit, futile. Most people would like to do so for many reasons. One being that the British pioneered the use of concentration camps in SA in 1901 in order to contain recalcitrant Boers and their guerrilla tactics in the Anglo-Boer War of 1899-1902. Another being, some of the people in the National Party leadership in South Africa were convicted Nazi sympathisers.

France's Jean-Marie Le Pen regards the Final Solution as a "detail" of history. Austria's Joerg Haider, would like the world to take a more relaxed view of Hitler.

Nevertheless, some scholars, politicians and certain sections in the media have gone on to do exactly that. Needless to say, the result has been to obscure, to blur and unwittingly to trivialise the particular effects of apartheid and those of the holocaust.

The concept of concentration camps (and the name) was introduced by a Spanish general in Cuba during the Spanish-American War of 1898.

This work is a journal of my exploration of landscapes associated with spectacular events of horror in Europe and Asia in search of answers to some of these questions. The journey begins at home, where I look at ancestral grave sites invested with spiritual meaning. Relocated graves stones in Bethlehem, Free State, which are still considered an act of sacrilege by the apartheid regime. Concentration camp sites and burial grounds in the grounds in Middelburg and Brandfort. I contrast this with the catacombs in Paris, France where the bones of the dead are aesthetically re-arranged and designed in order to attract tourists. Namibia, once German Sudwest, is less familiar as a site of near genocide of MaHerero in1904.

BUT I just looked into my etymological dictionary and it tells me that "Konzentrationslager" is an "internment camp in the Boer War" and that the German word was probably translated from the English in the beginning of the 20th century. There you go! South African origin!

I saw some disquieting developments in Poland regarding Hitler's death camps there. You can now go on a Schindler's List tour of the camps. Aside from the camps you have the neglected Jewish Ghetto mass graves. At least in Lodz, one Josef Buchman of Frankfort, Germany is erecting commemorative headstones in one of the sites. In Vietnam you can do the DMZ tour to the sound of late sixties and early seventies American pop hits and listen to government anti-American propaganda. You don't get any information about the Vietnamese experience in that war. The Jewish experience in France during the Vichy Government is little known outside Francophone countries. I guess this situation is being remedied because of recent high profile trials of Nazi collaborators there since Jacques Chirac came into power. He, more than any previous governments in France acknowledges the culpability of France in "the final solution" because of the Vichy Government during the war. In the past, I guess since De Gaulle, the French through selective amnesia, wished only to extol the virtues of the French Resistance Movement. At Drancy, a transit holding camp, one stop before Auschwitz, some Jewish groupings work to keep the memory of the holocaust alive.

Was it the Anglo-Boer War or the South African War?

One question currently being addressed in German politics is, whether or not there should be a national Holocaust Memorial, or whether the camps themselves should serve as their own memorials. While the debate rages on, neo-Nazis keep the memory of the holocaust alive when they try to raze the remaining death-camps in Germany in order to erase the holocaust from memory. The question then is, would a monument invite remembrance or through a kind of containment, forgetting?

Somebody once remarked that nature is indifferent to human suffering. In my travels through Europe and Asia I am left wondering whether we South Africans can ever learn anything from there on how to deal with our own terrible memories. Can we not learn anything from nature? Maybe Spain after Franco, offers an alternative example when it comes to resolving the questions surrounding memory, I don't know.