Emerging artists from Pakistan. 6 April - 7 May 2016 at Hinterland, Vienna. Curatorial text by Aisha Khalid, photos of works by all the participants and the exhibition. 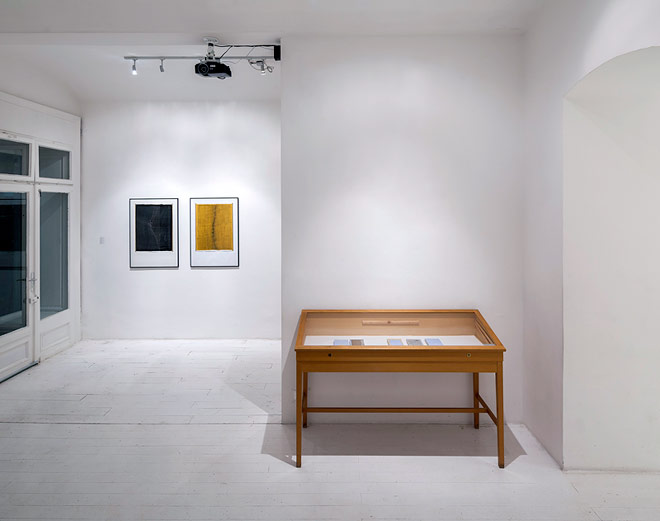 Mughal miniature painting was essentially a court art. It developed under the patronage of the ruling Mughal emperors.

The miniature school began during the reign of emperor Hamayun in the 15th century, who invited two Persian artists to join him in India. The earliest and most important undertaking of the school was a series of large size miniature paintings of Dastan-e-Amir Hamza undertaken during the reign of Akbar (1556-1605). Museum of applied Art (AKM) in Vienna has the largest collection of manuscript pages from the surviving sixteen-century illustrations of magnificent Hamzanama.

Akbar is known for his fondness for history and historical events. He commissioned illustrations such as the dynamic Akber-Nameh. Akber-Nameh is the biography of Akber containing beautiful illustrations of animals fables KalilawaDimna, etc.

Unlike Akber who emphasized on illustrating historical events, Jahangir preferred to commis¬sion court scenes, portraits, and animal studies. These paintings were assembled in albums with richly, decorated margins. The style of Jahangir’s time shows technical advancement in the fine brushwork (Perdakht), compositions and the use of color. The art of this period exhibits a sensitive understanding of portraiture, human form, and animal form.

The elegance and richness in paintings from Jahangir’s period was carried into the reign of Shah Jahan, with a few variations in the genre scenes–musical parties, lovers on terrace, or ascetics gathered around a fire. These exceptional illustrated productions under his reign have been researched and documented by the Austrian/Viennese art historian Ebba Kock.

The process of creating a Mughal miniature usually involved a team of artists who worked to-gether on the same painting. One artist developed the composition, a second applied color, and perhaps a specialist in portraiture rendered individual faces.

Miniature painting has evolved into different styles over the years and is still transforming. Anything related to human life does not remain static; it evolves according to social and politi¬cal changes. Whatever was painted during the Mughal era was modern and contemporary for that time-it was original. Themes and interests were dealt very differently by different artists. Dastan-e-Amir Hamza is painted on fabric in a much larger size compared to other miniature paintings of that time. This shows artists were constantly engaged in experimenting with form and technique.

Over the years paintings have been classified and named according to their social, political and religious connotations. Tradition changes with time and evolves through social and cultural changes.

Hence, the question comes to mind: what does tradition mean and what are it’s limitations?

Personal/Universal contains works of contemporary artists. Although, trained and associated with the traditional technique of miniature painting, it is amazing to see the point of departure in terms of form and exploration of the technique presented in the works. The art practice is linked with artist’s own personal vocabulary, which does not necessarily come from their training in miniature. It stems from their life experiences, influences and inspirations from surrounding cultures, or social/political change.

The discussion about tradition seems meaningless when you set no limitations for the extreme exploration of the technique. At times, human hair replaces the fine squirrel tail brush-hair isn’t used in the brush to apply paint. Instead it is used to embroider fabric and sometimes even paper. Aggressive strokes of graphite are not actually applied with graphite, but are carefullypainted with a fine brush. This process of opposing acts becomes meditative. Traditionally one associates miniature with things on a small scale. The contemporary submerges with the traditional when the heavy terracotta bricks turn into tiny miniature bricks.

In this universal art scene nothing is personal as any one from another part of the world can relate to it. Thanks to quick exchange of information and globalization. Now symbolism and signs have become familiar to everyone in this small world. Due to acceptance of new and exotic things, the urge to learn and increase one’s knowledge is increasing.

Just like in the past, today, inspirations and influences travel from one place to another and become a part of different places. The personal extends into universal just like a stitch of embroidery that manages to become real; a few piles of paper contain millions of words; the sound of making art speaks to both you and others. Yes-personal is universal.

Rehana Mangi uses hair as metaphor for loss and death. She uses fallen and dead hair to embroider colorful patterns, flowers and butterflies on fabric and paper (wasli). Her images come from her childhood memories of embroidered pillow covers and sheets. Mangi is one of the few early artists who transformed the traditional technique of miniature painting into a contemporary form by replacing the traditional kalam and wasli with hair.

"I start from the blank white pages of a daily diary which records day to day short lived moments, pains and pleasures, claustrophobic images filled with text spreading like a contagious virus."

In Aisha Abid Hussain’s work, one can see piles of paper, each of a different thickness, written over in writing so small that it can hardly be read. Some text is intentionally exposed to the viewer and some hidden. The piles of paper are constructed the same way a wasli (paper used for miniature painting) is constructed, by pasting several sheets of paper together. This process of layering paper is meditative, just like the process of making images by writing text.

"The work that I produce is in-sync with my mental state of mind, as I feel, I act, I produce!"

Hammad Gillani’s work is the cultivation of a behavioral process that is divided in two opposite acts/stages. First is the making of the aggressively drawn graphite stroke. Second is the detail captured on wasli through meticulous rendering (Pardakht). Both these stages are opposite and extreme.

"As a Hazara girl, it is expected traditionally to master the techniques of sewing, knitting, stitching and weaving. Instead, I spent all of my time playing with paints and colors."

Rubaba Haider’s work incorporates cultural metaphors from everyday life. She chooses to subvert traditional crafts by using the very same traditional materials in a contemporary way. The simplicity and fragility in her paintings shows how a mere thread can bind things together. Like a thread, relationships too can be so strong that they can hold everything together. And at the same time, relationships can be so sensitive, that they break easily.

"To me bricks and walls are a symbol of enormous strength; they represent social power and they demarcate the boundaries of ownership. But on the other hand, they are the symbol of absolute silence and isolation. They are seemingly immovable and Impenetrable."

Noor Ali Chagani transforms the principles of Mughal miniature painting into three-dimensional sculptural forms that are both spare and fragile. His miniature bricks replace the fine strokes of miniature painting (perdakht) and that repetitive act transforms into hundreds and thousands of tiny terracotta bricks placed one by one to construct a miniature walls.

"The method has sort of become my signature now as I continue to produce work in it, slowly developing and evolving my subject matter, imagery and color in a 'personal' connotation."

Adeel uz Zafar’s work contains a printed handmade book, a paradox created by the fact that you cannot find any words inside it rather this book contains images of scraping or etching lines. The book is accompanied by an audio that is based on a scratching sound that creates a natural rhythm. It continuously gets slower and faster; like a sermon or the memorizing of verses without any understanding as to their meaning or molding and shaping thousands of mind as you flip through the book. Two works are on the vinyl surfaces covered with acrylic gel, which he scrapes using sharp tools to create incredible linear detail that support and shape the overall paradigm of the installation.

"Skin is generally considered to be the boundary between the internal body and external world."

Ali Kazim’s work contains sensitively applied watercolor washes and confined details. These details are not only present when he works in watercolors but even when he works in graphite and ceramics. His installations are also constructed with very fine translucent paper, similar to the membrane of the skin. On the translucent paper (acid free tissue) Kazim uses charcoal to draw detailed drawings of forms similar to human intestine. He also relates the fragility of the drawings with human skin. He has overlapped several sheets of paper that cover a whole wall and the drawing extends on each sheet. An almost five feet nude drawing of a human in a fetus form is a part of this installation.

Internationally renowned artist Aisha Khalid was born in 1972 in Faisalabad, Pakistan. She graduated from National College of Arts, Lahore, in 1997, and did her Post-Graduation at the Rijksakademie, Amsterdam, Netherlands in 2002.The subject matter of her work is influenced by her own personal experiences regarding aesthetics, power play between East and the West and gender role of women in our society. As a Pakistani woman who grew up in a modest household, domesticity is treated in work with both critique and fondness. Khalid is part of a movement of artists in Pakistan that works for the revival of the traditional medium of miniature painting. However, she juxtaposes the decorative surfaces derived from miniature paintings with deeply controversial social and political elements. Her work is displayed in several museums and private collections all over the world including the Aga Khan Museum Toronto, M+ Museum Toronto, V&A Museum, Fukuoka Asian Art museum Japan, Sharjah Art Museum, Queensland Art gallery, Sheikh Zaid Museum, Harris Museum and World Bank. Khalid involves herself into many cultural exchange programs and this exhibition is a part of her curatorial outreach. 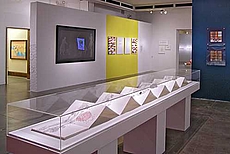 Display of skill or conceptual strategy? A critical evaluation with examples from Beyond the Page.