Museum für Islamische Kunst, Berlin, 29 July - 30 October 2016. Pictures by the Syrian photographer showing the life in his home country before the war. 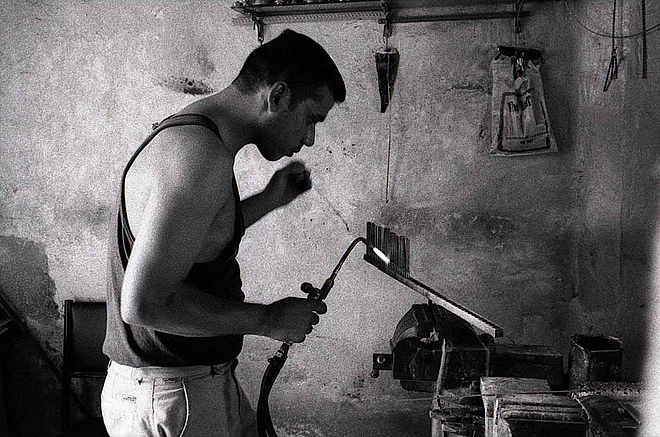 Syria: destruction, suffering, death. Nowadays if you were to ask German people what they associate with this war-torn country, they may very well come up with these words.

The Syrian photographer Mohamad al-Roumi, whose pictures of his native country constitute an extraordinary life's work, is now showing a different side to Syria in his exhibition Contrast Syria at the Museum für Islamische Kunst. Here visitors can see pictures taken in Syria's north-eastern provinces over four decades, showing the region's nomadic population and the working conditions to be found in its poverty-stricken towns. Many of the people currently arriving in Germany call these parts of Syria their home.

"The first photographs I took, were of the places where I lived as a child in Syrian Upper Mesopotamia" explains al-Roumi, "I was only 14 when we left Tell Abyad, carrying with me all my memories. Our small town, surrounded by springs like an oasis on the steppe, was a mosaic of religions and ethnicities: Kurds, Turkmens, Yazidis, Syriacs, Muslims and Armenians. The latter, famous for their skills in metal work ran repair shops for agricultural machinery. I owe my love of manual labour and the technical aspects of photography by them. I was nicknamed the Armenian. Later, in Damascus, I used to spend hours in a poor quarter, where I could watch the artisans in their workshops with moulders and smelters, glass blowing and carpentry... Perhaps it is my father’s semi-nomadic roots that take me back to this place. He was a man who spoke very little, but I found everything in the eyes."

Mohamad al-Roumi invites visitors to share his highly personal view of his homeland, mediated through a sophisticated and authentic visual language. There is nothing left to chance; rather, each picture seems to convey some actual essence of reality. Al-Roumi seeks to craft a special expressive idiom, directing our gaze both to the beauty and ugliness of everyday life. Contemplation is accorded a particularly significant role in the photographs, which were evidently not created spontaneously. A profound sense of reverence characterizes his portraits of people who, despite often being engaged in exhausting work, still radiate tremendous dignity. It is precisely this highly personal perspective that allows Mohamad al-Roumi to show what Syria really is: a home to people from a variety of different ethnic and religious backgrounds.

"I think it is important that people see images of Syrians who are not linked to war and not part of ISIS or Bashar al Assad's army" the photographer insists, "this exhibition shows a glimpse of normal life in the Syrian countryside and suburban districts. One of a multicultural, peaceful and generous people. This is how I remember the country that I left in February 2011, just weeks before the revolution started. I left my house thinking I would soon return. My mail is still on my table, with a pen next to it ready for me to reply to my correspondence. I keep hoping that all of Syria waits for me in the same frozen state, but I know this isn't the case. I have crossed the border just once since the war started, to attend the funeral of my nephew, who was killed fighting for the Free Syrian Army in 2012. Then I saw the damage of an increasingly chaotic situation. Yet, I also found the same hospitality and spirit of forgiveness that I always knew. The strength of the Syrian people is that they do not hold on to hate, one day they will be united again and build a peaceful nation."

By offering a Syrian's perspective on his own homeland, the photographs lend a view of the country distinct from the image that we have recently become accustomed to seeing. This helps provide a better understanding of Syria's significance for its inhabitants and a clearer sense of their actual everyday reality.

(From press information, artist statement, and a conversation with Hannah Kugel on the 26 July 2016)