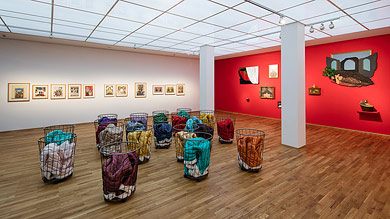 Gülsün Karamustafa (b. 1946) is regarded as one of the most important artists of the second half of the 20th century in Turkey, where her work has been a decisive influence on younger generations of Turkish artists since the 1990s. Internationally her work has been shown in numerous exhibitions. Now, for the first time outside Turkey, the Hamburger Bahnhof will stage a comprehensive solo exhibition of her work in a museum setting, introducing her work to a wider international public.

Karamustafa's oeuvre stretches from the middle of the 1970s to the present day and encompasses various media, including painting, installation, performance art and video. In terms of content, the main emphasis of her work lies on questions of migration, politically-induced nomadism, pop culture, feminism and gender, and critical analysis of the Western view on Middle-Eastern countries. While the media-specificity and materiality of her work since the 1970s have seen an evolutionary development in art-historical terms, the same themes permeate all phases and forms of her creative output and are of unmistakable relevance to current debates. The exhibition in the Hamburger Bahnhof, including about 100 works, is designed to make these ramifications and cross-connections visible by showing the works not in chronological order, but in a thematic arrangement which brings them into dialogue with each other.

A catalogue accompanying the exhibition will be published by Verlag für Moderne Kunst. Supported by the Hauptstadtkulturfonds.

Etiquette (The Taming of the East), her new installation showcased at the ifa-Galleries, Germany.
Nafas Art Magazine