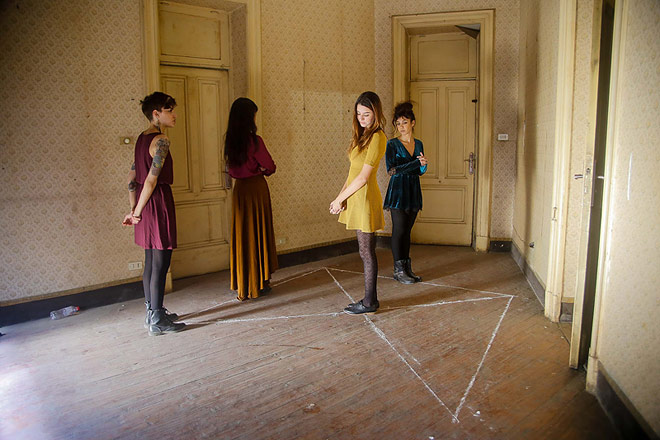 Launched in March 2012, the Downtown Contemporary Arts Festival (D-CAF) has established itself as the largest independent multi-disciplinary festival of its kind in Egypt and the Arab region. D-CAF brings together artists from Egypt, the Arab region and Europe in a three week programme of independent theater, film, music, dance, including street dance, concerts, visual arts exhibitions and specialized workshops at multiple sites in Downtown Cairo.

SOUNDS AS IF makes up the visual arts component of this year's festival. According to curator Aleya Hamza: "I wanted to stay faithful to the spirit of DCAF as a festival that brings together different art forms from visual arts to music, film and theatre. This inspired a desire to work on a show that deals with art from a multi-dimensional and multi-experiential perspective. Many artists today work across media and disciplines, so curating a show about the potentials of sound approach made sense, because sound is often an integral part of art practice."

SOUNDS AS IF is inspired by the potential of sound to unearth and generate emotions. In the city of Cairo where the noise level is estimated to be at an average of 90 decibels – comparable to the sound of an aircraft right before landing – it is practically impossible to escape the score of the city. The exhibition taps into the sensibilities of Musique Concrète, a term that was coined in 1948 by the influential French composer Pierre Schaeffer. The term refers to the practice of sampling pre-recorded material from everyday life and incorporating it into a musical composition. The show is not concerned with sound or music as such. It invites us to think about what happens when one sees, hears, reads or experiences something familiar out of its original environment. How do artists work with sampling techniques to alter the way we experience the present moment?

SOUNDS AS IF brings together new and old projects by six artists working across a range of mediums from sculpture, painting and photography, to film, installation and performance. The show takes place in three locations in Downtown Cairo that have been converted by DCAF to house the individual works. The multiplicity of images and sounds which create sensorial overload, and the collapse of time, are some of the commons threads that tie the works together. The exhibition implores us to connect with artworks – whether they are sound, image or object-based – on an intense physical and emotional level.

Basma Al Sharif began working on Deep Sleep (2014) after she was temporarily restricted from traveling to the Gaza Strip. The work layers multiple ambient field recordings with footage shot on super 8mm film in Mediterranean locations of historical significance. Drawing on the tropes of avant-garde cinema and filming herself under a state of hypnosis, Al-Sharif takes us on an entrancing visceral journey through memory, time and place.

Cairo-based Doa Aly premiers House of Rumour (2016), an ambitious four-channel performance-based video installation. The work takes its title from a verse in Ovid’s Metamorphoses, a book that Aly has been consumed with for the last 5 years. Through this highly stylized and staged voice-driven work that synthesizes original writing with recycled sources, Aly proposes a perception of everyday reality as a kaleidoscope of words.

Ahmed Badry’s work concerns itself with the relationship between form and function. He presents a newly commissioned site-specific sculpture in a store front on the corner of an alleyway and a major street. The work is part of an ongoing series entitled The Provisionary that Lasts (2014-ongoing). Badry begins from everyday objects that we encounter in our daily life, but that have been recycled in an absurd manner. Meticulously constructed out of cardboard, his large-scale sculpture acts as a silent object amidst the chaos. It becomes sonic through the associations it triggers in our mind.

Elements of the Unexpected (2016) is a new iteration of Magdi Mostafa's investigations in creating dynamic, variable scaled-vibration sound-based sculptures. The project is an extension of his series of work Sound Cells that started in 2009, which prompted his current research in making aural observations, listening practices, and addressing what he calls "The social acoustic repetitive phenomena." Mostafa is trying to use sound as a container for political, social and economic issues by importing selected elements from a specific environment and rearticulating it into a scenario of artwork.

Showing work in the renovated former Kodak shop, Joe Namy presents 28th Color (2013-2014), a lyrical ode to remembrance and change. Photographs shot by the artist are paired with a personal narrative, and quotes from a theoretical and philosophical text which he was reading at the time while producing the works. The hazy images display traces of refracted light as it splits into a spectrum of color; but their inherent beauty is challenged by the starkness of the industrial landscape of Detroit, the city that inspired the work.

Ahmed Sabry continues his exploration of the relationship between image and text in this new series of paintings entitled Amgad’s Project (2016). His work questions how we compute meaning when we are faced with conflicting visual and textual messages. This series draws on a series of screenshots from a Facebook page that is used as a platform for satirical combinations of photographs, gifs and messages circulating on social media. 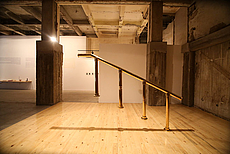