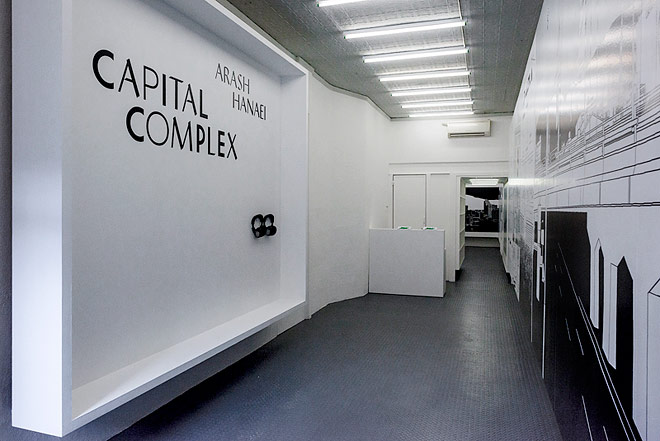 Arash Hanaei has been portraying the city of Tehran since 2008. His digital drawing series entitled Capital dissects its shifting pattern of streets and their inherent contradictions. Based upon his own documentary photographs, the artist interprets the capital city’s constant transformation and the chaotic superimposition of dissonant layers with formal austerity. Primarily black-and-white or greyish-green, the drawings reduce the original amount of information on the photographic image to a minimum and direct the viewer’s attention to the cultural and geopolitical underpinnings inscribed in the urban landscape.

Among other works, Capital Complex presents Hanaei’s history of advertising in Tehran’s public space narrated in two series, one featuring billboards and another one murals with war heroes and martyrs. After the Iranian Revolution and during the Iran-Iraq war, propaganda images took the place of advertisements for foreign products. Ever since the latter began making their way back into the cityscape, they have coexisted with the other, political images and texts, often displaying slogans with similar language. Hanaei’s visual alphabet of the dynamics of past and present in Tehran recounts a local history within its global context.

In Hanaei’s first solo exhibition in the United States, Tehran’s urban architecture merges with the display walls at MINI/Goethe-Institut Curatorial Residencies Ludlow 38. The visual works are presented alongside a new audio piece in which the artist reflects on a future project devoted to the capital city of Paris.