The exhibition responds to political and social outcomes of past and present events, as well as their connection with literature, music, and film. 19 January - June 2016, Darat al Funun, Amman. 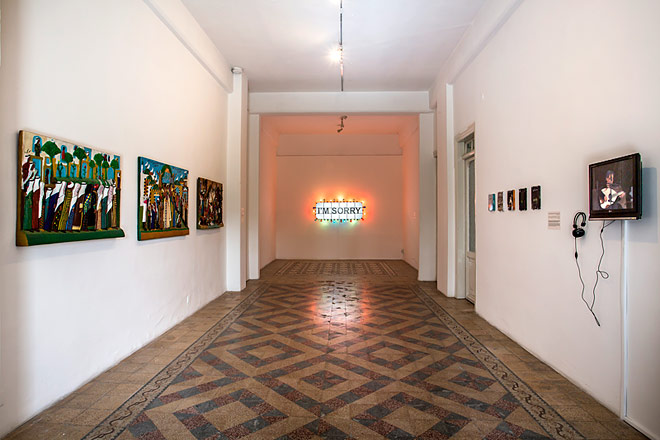 Darat al Funun presents Alive in the Dead Sea (1995 - 2015), the second exhibition exploring the history of art in the region, the relationship between art and political and historical transformations, and the dialogue between art and literature, music, and cinema, through the artworks of The Khalid Shoman Collection. The first exhibition was Rituals of Signs and Transitions and covered the decades between 1975 and 1995.

Alive in the Dead Sea (1995 - 2015) takes its name from the book by Jordanian author Munes al Razzaz, which presents an important, albeit harsh, testimony about the reality of the current state of the Arabs in the post-colonial era we live in today.

The exhibition Alive in the Dead Sea (1995 - 2015) showcases Arab art created at the end of the 20th century and the beginning of the 21st century, and documents or responds to political and social outcomes that are the result of past and present events, as well as their connection with literary, musical, and cinematic productions of the time.

Artists from The Khalid Shoman Collection

The exhibition investigates the relationship between art works and political and historical transitions. Darat al Funun, Amman, Jordan. 19 May 2015 - January 2016.

Interview with Suha Shoman, Founder and Chair of the Khalid Shoman Foundation and of Darat al Funun.
Nafas