What Are You Doing, Object? 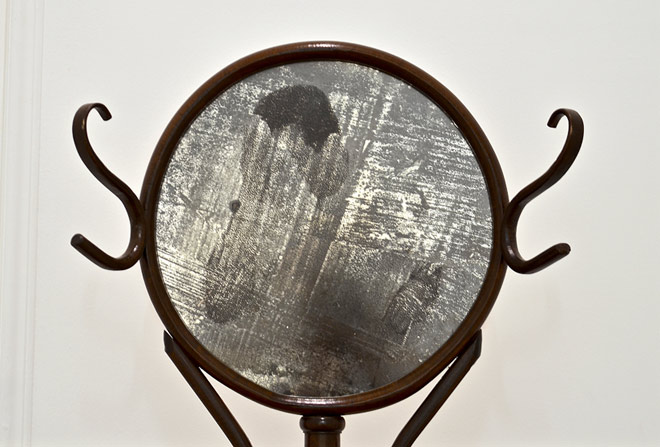 What are you doing, object? is the playful title chosen for the first group show at Cairo's Gypsum Gallery, conceived and curated by the artist-run collective and art space Nile Sunset Annex, (Jenifer Evans and Taha Belal), at the gallery’s invitation.

The affinities between the two initiatives, both self-funded though quite different in terms of resources and scale, center around new productions, experimentation and artworks’ materiality. Gypsum and Nile Sunset Annex have arguably filled a gap in the local contemporary art landscape for artists to produce, show and sell artworks that do not necessarily worry about conveying messages, being tied to concepts or narratives, or justifying their national legacy or presence in time and place.

WAYDO? is an exploration into form, in which objects speak for themselves and sometimes even seem to interrogate viewers, adding new signs and shapes to their visual vocabularies. The works, by 10 Egyptian artists working now, plus two by the late Mounir Canaan, often have a strong presence, which makes the exhibition seem a bit overloaded with objects and content.

The most traditionally minimalist artwork in the show, first on display next to the entrance door, is Ahmed Badry's Ruler. It is white, clean and precise, yet it is imperfect, and the numbers on it are unevenly spaced out. Rulers refer to geometry and pure form, but this piece is also handmade and forgiving: a combination of qualities that recur throughout the exhibition.

Doa Aly's slender wooden cubic structure Sculpture #1 House of Rumors (2015), elevated on a white plinth, fills up much of the first room with its empty volume. On a separate room, another large wooden structure composed of circular and triangular lines lies directly on the floor.

Their stability and firmness are derived from their tracing the path of a choreography the artist conceived for a 2012 four-channel video installation of four dancers performing a series of restrained steps and gestures. The two sculptures’ simplicity invites exploration through movement. At first they appear symmetrical, but as one walks around and leans in to follow the neat geometric lines, they assume different shapes. They are powerful in their fragility and have a theatrical presence, like a charismatic actor standing still in a mysterious pose on stage.

Similarly, one can't ignore the odd presence of Malak Helmy's seemingly extraterrestrial shiny bright blue blob, A Rock Exits a Video and Becomes a Puddle (2013), also in the first room. Its organic shape echoes that of a rock, meteorite fragment, or sample from an excavation on another planet.

Mona Marzouk's minimalist Untitled (1996) is the exhibition’s leading character: with its towering mass, it grabs attention and invites the viewer to move around it to experience the perspectival shifts that occur in its repetitive interior layers. It looks like a monolith but in fact is a complex structure of 80 thin wooden panels stitched together to form 20 units stood next to each other. With its curved, window-like apertures it is reminiscent of classical Islamic architecture or Renaissance drawing studies in perspective.

Next to it, a small, apparently alien head stands on a high triangular shelf, facing the corner, as if deliberately ignoring Marzouk's cube — and viewers. This is Sarah Samy's 3D-printed sculpture Solid (2014). It contrasts with the other work Samy has on display, Navigation #1 (2015), what looks like an outsized puzzle of irregularly shaped mouse pads, with a series of isolated figures — a butterfly, a winged elf, two snails, brightly colored Arabic numerals — printed on it. Gaming and the corny aesthetics of amateurish internet images are a recurrent inspiration in Samy’s works, and are combined here with playful randomness. More than any other work in the exhibition, Navigation #1 resists interpretation and association with relevance or site-specificity.

Playfulness is also immediately evident in the work of Dina Danish. Under glass, on a plinth, is an irregularly shaped compact metal object. Its reading depends entirely on the label that explains it as an archaeological find: chewing gum from the bronze age.

In the elegant setting of a posh gallery, among more somber works, Danish’s and Samy's works may make you exclaim, "what exactly are you doing here?" The objects seem to reply, "yeah, I am here, but do not take me (or yourself) too seriously."

High up next to Samy's mat hangs a large, handmade black-and-white rug, the creation of Kareem Lotfy, Untitled (2014), who used online cryptography tools to make a regular, occasionally interrupted pattern of apparent glitches. It is the kind of object that is both straightforwardly beautiful to see on display in a gallery and desirable for one’s house. Its effect is almost opposite to that of Samy's floor piece, and that’s why they work well together.

In a work by Iman Issa, Fortune Teller, a photograph shows a bright light coming from a circular hole. Next to it, a text vividly describes a scene. In the time it takes to read the text you "paint" a picture in your head, in strong contrast with the minimal photograph.

Hassan Khan’s Dense Object was first conceived to be photographed for a 2012 image based series entitled "Trusted Sources". It is composed of 5 disks of different metals, it looks smooth and precious and leaves one questioning its weight. It resembles a battery that might work a mysterious machine of the future. It is pure form, but suggests a function.

A second work by Khan, DOUBLEMIRROR (dream / object / echo) , is very different. A mirror is placed on a long, trumpet-shaped base, and a human head made of mud is nestled on the mirror’s top left corner. A new work, it feels oblivious to the works around it, yet its sinister gaze and the mirror reflecting the gallery’s architecture are disorienting.

Most of the works in WAYDO? do not provoke strong emotional reactions, rather they disorient, arouse curiosity and trigger speculative questions such as "what are you trying to do?" or "where does this come from?"

There is little aura of nostalgia or symbolism, no explicit trace of history or place, with the exception of Mahmoud’s Khaled’s The Crying Man, a subtle critique of the hypocrisy of the bourgeois materialized in an old-fashioned piece of furniture, which refers to the infamous "Queen Boat incident" [1].

Cairo’s contemporary art audiences have become acquainted with issue-based, text-heavy exhibitions. One often leaves them with the feeling of missing enough references to decipher the work, or making an effort to contextualize it before being able to appreciate it. Conversely, sometimes the references are so clear that there is little space for ambiguity or free interpretation.

Some people who saw WAYDO? commented that it could be taking place in London, New York or elsewhere. Its anachronistic feel was refreshing for some, disappointing for others, but the variety of reactions to the show’s ambivalent quality is a good sign.

Together, the artworks in WAYDO? are a free exercise in form, in line with NSA's tradition of versatility and its daring, unapologetically experimental attitude.

Since its inception in 2013, Nile Sunset Annex has produced 20 month-long exhibitions and as many publications, focusing mostly on displaying physical objects, sculptures, printed matter and paintings.
The space is a 4-meter square spare room in the apartment one of its members lives in. Nile Sunset Annex share the cost and the effort of producing the work with the exhibiting artists, so the relationship relies mostly on the enthusiasm and generosity of both parties. Belal and Evans are artists themselves (Belal has exhibited with Gypsum) and are building a small collection with personal acquisitions of contemporary Egyptian art and through an agreement to keep one work from each show.

For WAYDO?, Belal and Evans explicitly assumed the role of curator for the first time, and they furthermore manually fabricated most of the works on display. WAYDO? resonates with Nile Sunset Annex’s second show, entitled "What are you doing, drawing?" in which a group of artists and non-artists were commissioned to challenge themselves with the limits of what a drawing could look like.

Writer, researcher, photographer, and artist born in Sardinia, Italy; living in and out of Cairo since 2008.

What Are You Doing, Object?